Gibson County had three seniors to play their last regular season game May 1 against Obion Co. Pioneers seniors are Will Carson, Brennan Lownsdale and Lane Flesher.

Will is the son of Todd and Melissa Carson of Dyer. He has been a member of the baseball team for four years. Upon graduation, his plans are to attend Jackson State Community College and major in animal science.

Brennan is the son of Chris Lownsdale and Ryan Poole-Brock. He has been a member of the baseball team for four years. Upon graduation, he plans to attend UT Martin and major in business.

Lane is the son of Jason Flesher and Laura Hawks. He has been a member of the baseball team for four years. Upon graduation, he plans to attend Jackson State Community College and major in industrial maintenance.

On April 30, the Pioneers traveled to Henderson and defeated Chester Co. 6-1. On Tuesday night, Gibson Co. won 11-1 over Obion Co. to end the 2018 regular season. The Pioneers finished the regular season with a record of 20-6 and in second place in the district.

The Pioneers struck early in the game, scoring three runs in the top of the second. Noah Stafford was hit by a pitch to start the inning. Will Cantrell sacrificed, and Stafford scored on a hard hit single by Adam Smithson. Cameron McMackin singled and advanced Smithson to third. Colin Warren doubled to centerfield, scoring Smithson and McMackin to give Gibson Co. a 3-0 lead.

Chester Co. scored a run in the bottom of the second to make it 3-1 Gibson Co.

The Pioneers scored a run in the third inning on a lead off single by Sam McKinney and single to right field by Cantrell to give Gibson Co. a 4-1 lead. The Pioneers added two more runs in the fourth inning on a double by Stephen Overstreet and singles by Adam Atkins, McKinney and Austin Atkins for the 6-1 win.

Payton Lamberson was the winning pitcher. He allowed two hits, four walks and one run over five innings, striking out six. Adam Atkins threw two innings in relief, giving up one walk, three hits and no runs. Hitting for Gibson County were Sam McKinney 3-3 with a RBI and Austin Atkins 2-4. Cameron McMackin, Colin Warren, Will Cantrell, Adam Atkins, Adam Smithson and Stephen Overstreet each had a single.

Will Cantrell led off the second inning with a single to centerfield and went to second on a sacrifice bunt by Adam Smithson. Cantrell scored on a triple to left field by Colin Warren, and Warren scored on a single by Cameron McMackin. Caden Wylie walked and scored on a triple by Sam McKinney to give Gibson Co. a 4-0 lead.

In the bottom of the third inning, Cantrell singled, stole second and advanced to third on a ground out by Smithson. Colin Warren singled, scoring Cantrell. With two outs, McMackin hit a two-run homerun over the left field fence to extend Gibson Co.’s lead to 7-0.

On Thursday, Gibson Co. beat Humboldt 11-1 in the opening round of the District 14A Tournament at Gibson Co. Dalton Flesher threw a complete game no hitter over five innings, striking out eight and walking one. Flesher retired the first 12 batters he faced through four innings.

In the bottom of the first inning, Stephen Overstreet, with a full count, hit a homerun to left field to start the inning. Austin Atkins and Noah Stafford hit back-to-back singles and scored on a double by Will Cantrell. Adam Smithson reached on a fielder’s choice, Cameron McMackin walked, and Adam Atkins reached on an error. Smithson scored on a wild pitch. Gibson Co. took a 4-0 lead.

The Pioneers scored two more runs in the third inning on singles by Cantrell and Adam Atkins to take a 6-0 lead.

Humboldt scored a run in the top of the fifth inning to make it 6-1. In the bottom of the inning, Gibson Co. scored five more runs. Smithson, McMackin, Overstreet and Stafford all singled and Adam Atkins hit a sacrifice fly for an 11-1 victory.

The Pioneers lost to Peabody in the second round of the tournament Friday night in Jackson.

Peabody jumped out to a 4-0 lead in the top of the first inning. Gibson Co. scored a run on a double by Noah Stafford to make it 4-1.

Peabody scored a run in the second, nine more in the third, and one in the fifth for the 16-1 win.

Pioneer Noah Stafford was 1-2 with a double and a RBI, and Adam Atkins was 1-2.

The Pioneers faced Madison at Gibson Co. Monday in a win-or-go-home game. 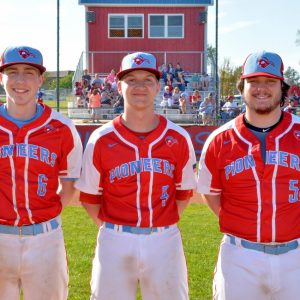