Thursday, May 3 our nation celebrated National Day of Prayer. According to www.nationaldayofprayer.com, this day was created in 1952 by a joint resolution of Congress, and signed by President Harry S. Truman.

In 1988, the law was unanimously amended by both the House and the Senate and signed into law by President Ronald Reagan on Thursday, May 5, 1988, designating the first Thursday of May as a day of national prayer. Every president since 1952 has signed a National Day of Prayer proclamation.

The National Day of Prayer’s focus is on unity. Ephesians 4:3 is the scripture from which this was derived. It states, “Making every effort to keep the unity of the spirit through the bond of peace.”

The American and Christian flags were presented on stage, and the crowd pledged their allegiance to each of them proudly.

Beautiful renditions of “The Star Spangled Banner” and “America The Beautiful” were sung by Betty Hardin and in accompaniment of the guests.

Local area preachers individually prayed five prayers. These prayers were for unity in America, the church, families/workplace, amongst ethnicities and for spiritual awakening in America.

Guest speaker Gibson Co. Sheriff Paul Thomas spoke to the guests about unity and what it means to us a nation. Thomas relived tragic events of his past that unity was derived from.

A drunk driver killed Thomas’ sister when he was only 21 years old. He spoke of how he believed that God used her death to reunite his family as a whole again.

Thomas believes that if we unite as Christians and become an unbreakable chain, then no one can take away our right to worship and pray to God.

In closing, Dr. Roger Stacy, Director of Missions for the Gibson Baptist Association, honored and acknowledged the veterans in the crowd and those in service of our nation. He also prayed over the lunch that was prepared for those in attendance.

“There is no great movement of God that has ever occurred that does not begin with the extraordinary prayer of God’s people.” Dr. Ronnie Floyd. Pastor of Cross Church, NW Arkansas. 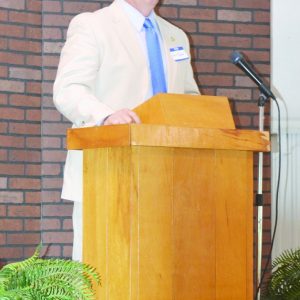