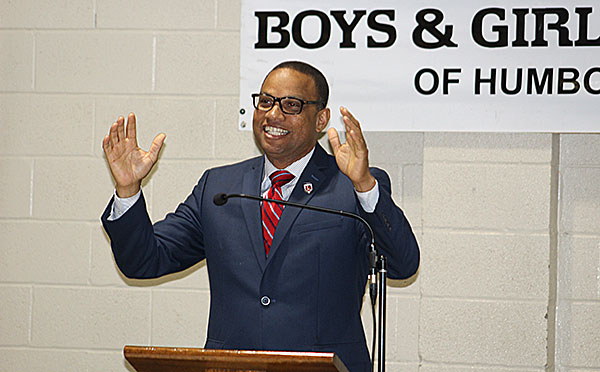 God made you exactly how he wants you to be. He made you with a purpose in mind. These were words of encouragement Dr. Logan Hampton told kids of the Boys & Girls Club of Humboldt Saturday night during the 6th annual Bird & Burger Dinner.

Dr. Hampton is president of Lane College in Jackson, Tenn. He was keynote speaker during the club’s largest fundraiser of the year.

Tables for eight people were set up in the club’s gym. Six seats were for sponsors who purchased tickets and the other two were for B&G kids. This gave the kids and the adults time to get to know each other.

The program began with president of the board of directors, Patricia Taylor opening the program. She explained the buffet layout with one table serving burgers and the other serving chicken‑hence the Bird & Burger theme.

Dr. Versie Hamlett, superintendent of Humboldt City Schools, a partner with the Boys & Girls Club, introduced Dr. Hampton who had just got back in town after attending his daughter’s graduation in Arkansas.

As Dr. Hampton addressed the crowd he asked the club members to look around at the adults sitting at their table and all across the gym. These people have your backs, he told the kids. These are leaders in your community, Dr. Hampton explained.

The first part of Hampton’s message was aimed more at the adults, thanking them for their time, volunteering, and of course their monetary support of the club.

But when his message changed to address the kids, his exuberance came out. He was very animated, excited and had the full attention of the kids. Dr. Hampton used some of today’s celebrities’ words and song lyrics to get his message across to the kids. And the kids responded with laughter, sometimes interacting with his message.

He referred to a song by Rihanna, asking the children if they were familiar with the song. They were! Dr. Hampton pinpointed one part of the song “Work, work, work, work, work, work” along with the words, dirt, learn and hurt, all repeated six times in the song. His message to the club members was the importance of doing your work. Sometimes you have to get down in the dirt in order to get the work done. Along the way you learn. And lastly, sometimes it may hurt but finishing your task or goal is worth everything you put into it.

This was an important life-lesson he offered the kids.

The program wrapped up with club director, Gladys Robinson, giving a state of the club address, highlighting many of the good programs and achievements of the club, and their members and staff. Special awards and presents were handed out to several club supporters.

After the program, guests enjoyed time visiting with the kids, club staff and thanking Dr. Hampton for such a moving speech. 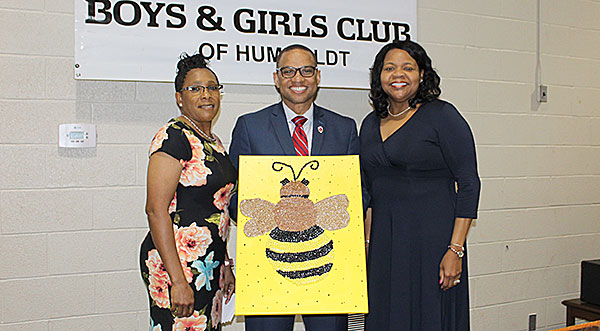 BIRD & BURGER – Boys & Girls Club of Humboldt director, Gladys Robinson (left) and board president, Patricia Taylor (right) are thrilled to have Lane College president, Dr. Logan Hampton as the keynote speaker at the club’s largest fundraiser of the year, the 6th annual Bird & Burger Dinner. Dr. Hampton’s message was aimed at both the kids and the adults, working hand-in-hand for the betterment of the community.