Rutherford School bathrooms got an inspirational facelift due to the thoughtful planning of local resident Christy Tosh. Tosh and several other concerned citizens got together a plan to make school bathrooms an encouraging place for students.

In light of recent tragedies around the community involving bullying, suicide, and students’ low self-esteem, Tosh felt in her heart and by direction of God that something needed to be done.

Tosh recently was diagnosed with a brain aneurism and hemiplegic migraines. Her career as an AEMT with Gibson Co. and Crockett Co. EMS was put on hold.

“I have never been able to just sit still, so I prayed to God to please give me something to do helping people,” Tosh said.

In her 18 years of service with the EMS, Tosh said that the last six months were the worst. She encountered three suicides of children under the age of 16.

Tosh’s prayers were answered, and she sprang into action. First, she contacted Rutherford principal Jody Hinson and informed him of her idea to have the bathrooms at the school repainted with encouraging passages on walls and stalls. Hinson was all for the transformation.

“All of this started with Christy,” he said. “I just said yes, 100 percent. Anytime we can spread positivity, let’s do it.”

The two gathered a team and put the plan into action on the students’ Christmas break so the new bathrooms would be a surprise.

Gibson County Sheriff Paul Thomas and Sgt. Kelvin Tosh, a School Resource Officer, got involved with the plan and Gibson Co. trustees painted the base coat over the old walls so the artwork could be drawn.  Sgt. Tosh supervised the inmates during the labor process.

Blake Elliot, of Sherwin Williams, donated all of the paint. Casey Oliver Davis, Dawn Siler, and Christy and daughter Emalyn were the artists. Rachel Abbott of the booster Ccub paid for all the volunteers to have a nice meal while working.

When the last paintbrush was laid to rest, the bathrooms walls boasted, “You are loved,”  “Share a smile,” and “If you think someone needs a friend, be one “ amongst many others.

There were times growing up that I wished I could have seen something like this when I was in the bathroom crying,” Tosh said. “Kids can be cruel. “Some kids never hear encouraging words like love and beautiful.”

The students appreciate the makeover.

“When you are having a bad day, you walk in and it lifts you up,” said sixth grader Carly Warren. Sixth grader Ellie Carson added, “They are very encouraging.”

Tosh plans to take this idea to other schools in the county as well. Hopefully with even more volunteers and the grace of God she will be able to involve Dyer and Spring Hill schools in the future. 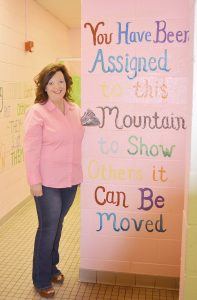