Sixteen former Gibson Co. baseball players returned to relive their golden years with the program. They were split into two teams for the game.

Team GC’s Eric Patton was named the MVP. He was 6-7 with a grand slam, solo home run, and eight RBI with a batting average of .856.

Team GC was the first to score in the top of the third inning against. Damian Gibson singled up the middle, Eric Patton singled to left field, Shawn Patton singled down third baseline, Carter McMackin tripled to centerfield, Cory Stewart doubled to right field, Cody Reynolds singled to right field, Chris Lownsdale hit into a RBI fielder’s choice, and Josh Harden walked. With bases loaded, Eric Patton hit a grand slam over the right field fence to give Team GC a 9-0 lead.

In the bottom of the third, Team Pioneers’ JJ Coble hit an infield single, and Jonny Lownsdale followed with a single up the middle. Travis Watkins singled to center field, Gordon Reed singled to left field, and Charles Allen singled just past the second baseman to make it 9-4.

Team GC added three runs in the fifth inning and five more in sixth. Patton led off the sixth inning with a solo home run to right field to give Team GC an 18-4 lead. In the seventh inning, Team GC scored a run, and Team Pioneers added a run for the 19-5 final.

Gibson Co.head coach Neil Papich said, “I would like to thank everyone for coming out and making our 2nd Annual Gibson County Baseball Alumni Game a success. We had a blast along with the community, and I hope to see you during the 14-A District Tournament supporting the Pioneers.” 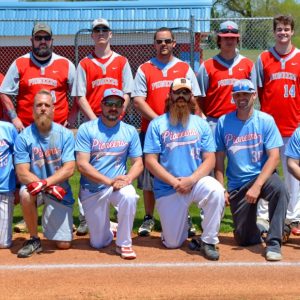