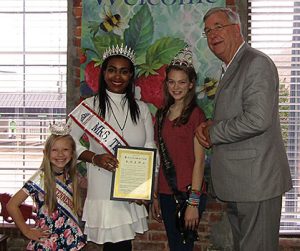 FOUNDER AND AMBASSADORS – S.A.S.H. founder, Tiffany Purnell (center) had her Gadsden Elementary S.A.S.H. ambassadors, MaKayla Murphey (left) and Paige Helton (right) with her as she was honored by Humboldt Mayor Marvin Sikes.

S.A.SH., Students Against Self-Hatred, founder Tiffany Purnell is gaining momentum for the work she began in Humboldt.

Purnell, current Mrs. Tennessee and teacher at East Elementary School in Humboldt, saw a need in elementary school age girls and jumped in to address that need. Studies show that often girls’ self-esteem begins to decline around age nine.

“This often leads to other problems such a bullying, self-harm and other behavioral issues,” said Purnell.

Purnell started S.A.S.H., a trademarked name, at East Elementary School in 2015 with only five members. Now she has 30 students who meet once per month after school.  She has ambassadors at Gadsden Elementary for the club that began their own charter. Charters also exist in Nebraska and Mississippi. The girls are involved in a S.A.S.H. pageant once per year. This pageant is more than a beauty contest. Purnell is looking for confidence and growth.

To the other charter clubs, Purnell provides lesson plans and activities.

Purnell hopes to continue expanding her charters across the country as she herself continues to grow. She will compete in the nationals pageant contest in July. After already achieving her bachelor’s and master’s degrees, she is currently pursuing her doctorate. She also remains a full-time third grade teacher at East Elementary.

With her Gadsden Elementary S.A.S.H. ambassadors by her side, Purnell was thrilled to receive a proclamation from Humboldt’s mayor, Marvin Sikes last Tuesday.