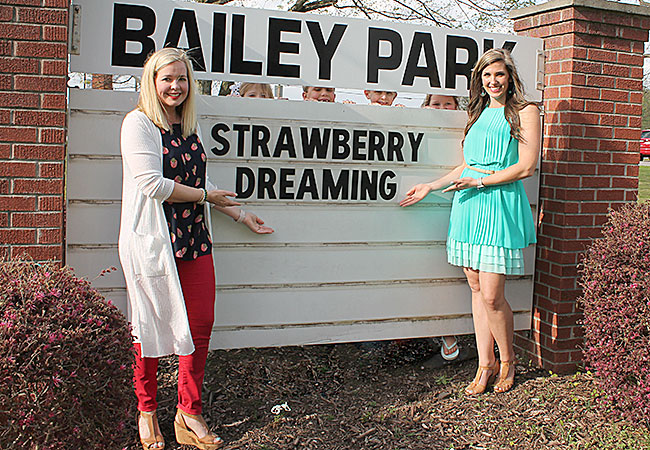 MOVING TO BAILEY – West Tennessee Strawberry Festival president, (left) Melissa Swingler (with her daughters Ella Kate and Lizzie peeping through the sign) and festival general chairman Chelsea Caraway (with sons Cannon and Colt) are at Bailey Park, the new location for this year’s BBQ Cook Off. Years ago the cook off was held at Bailey Park, then it moved to Viking Park the past several years. Now back at Bailey, Caraway and Swingler wanted the event to be closer to the middle of town with Main Street just a couple of blocks away.

With the Strawberry Festival less than two weeks away, all the hard work and planning is complete. Now President Melissa Swingler and General Chairman Chelsea Caraway are putting the final touches on each event.

Planning an event as large as the West Tennessee Strawberry Festival is a huge mountain to climb. If it weren’t for the dozens and dozens of committees, workers and volunteers, not to mention the city of Humboldt and Chamber of Commerce, Humboldt’s crown jewel would not be the success it is year after year.

This year, the Swingler/Caraway duo didn’t want to make a lot of changes to the festival. But they did tweak some of the events to help keep them fresh.

“We met with all the committee chairs and asked what they needed, what could make it better,” Swingler said of cultivating each event. “We listened to what they had to say.”

“It’s been so successful,” Caraway added. “We don’t want to make a lot of changes, just tweak things to help make it better.”

One change this year will be the venue for the BBQ Cook Off. When the contest began, it was held at Bailey Park. After a few years, it was moved to Viking Park. This year, the BBQ Cook Off will move back to Bailey Park. Tate Jenkins, who heads up the BBQ committee, requested moving it back. Swingler and Caraway agreed it was a good idea.

“We wanted to move it back toward the center of town,” Swingler noted. “With so much happening on Main Street, we wanted to be close.”

The Barbecue Cook Off begins Friday, May 11 at 1 p.m. Friday night, Johnny Mac will perform on stage at 8 p.m.

Another change this year is Arts on Main. Swingler and Caraway are expanding it, now called Strawberry Market on Main. Swingler praised local artist, Libby Lynch, for using the Artisan Trail to attract artists. This year there will still be plenty of art, but include what Swingler referred to as “pop-up shops” with different vendors. That definitely drew even more interest because all booth spaces are reserved. Strawberry Market on Main will be held in the Opera House in downtown on Friday from noon until 5 p.m., and Saturday from 9 a.m. to 2 p.m.

The other big change this year may not seem that big to most people but is a big change for visitors to the parades. Bands will no longer compete as they march in Junior Floats Parade and the Grand Floats Parade.

With travel getting more and more expensive for school bands, eliminating competition will allow the festival to pay the bands a little more to cover their expenses. Money spent on judges, a luncheon and awards can now be reinvested into attracting more bands to participate in the parades.

The rest of Festival week remains pretty much the same as years past. Here is a snapshot of each day’s events.

Sunday, May 6 begins with the Prayer Breakfast held at the Humboldt Medical Center at 8 a.m. The keynote speaker this year is former University of Mississippi head football coach, Hugh Freeze. With a big name like coach Freeze, tickets are going fast. Advance tickets are required.

Monday night is Opening Ceremonies at Barker Memorial Stadium at 7:30 p.m. Entertainment will be provided by No Time Flatt, recent winners of Blue Grass Band of the Year at the Tennessee Music Awards held in Memphis. Monday ends with a bang with the Fireworks Extravaganza.

Tuesday night is the Recipe Contest and A Taste of West Tennessee.

Wednesday night is the President’s Reception to honor previous WTSF presidents. This is an invitation only event.

Also Wednesday is live music by Bandstand Revue in downtown in front of Plaza 3 Theater. Music begins at 6:30 p.m.

Thursday is a busy day, starting with the Junior Floats Parade at 10 a.m. on Main Street.

The Strawberry Classic Golf Tournament is Thursday with lunch at noon and a shotgun start at 1 p.m. at Humboldt Golf & Country Club. There are still slots for teams.

The Humboldt Hall of Fame Receptions is also at 5 p.m. at First United Methodist Church.

Thursday night on Main Street, The King Beez from Memphis will perform downtown at 7 p.m.

The Governor’s Luncheon will be held at 12:30 p.m. in the Humboldt Medical Center conference room. Advance tickets are required for the luncheon.

Also Friday will be the BBQ Cook Off and Strawberry Market on Main.

Another big draw is the Horse Show. Walking horses and riders from miles and miles away travel to the Strawberry city to compete at Chalmus Davenport Arena at 6:30 p.m.

The Car Show and Tractor Show will be held at 8 a.m. at Viking Park with Humboldt Area Rescue Squad hosting the event.

Strawberry Market will open at 9 a.m.

Saturday morning close to noon, the BBQ Cook Off winners will be announced.

At 11 a.m., the Little Miss Territorial Revue will be held at East Elementary School.

Festival week wraps up Saturday night with the crowning of a new Territorial Queen. Territorial Revue begins at 6 p.m. at East Elementary.

With such a big week ahead, Swingler and Caraway have been busy with final plans, dotting the “I”s and crossing the “T”s making sure this year’s West Tennessee Strawberry Festival will continue to be Humboldt’s crown jewel once again.

PHOTO BOMBED – Strawberry Festival president Melissa Swingler’s daughters Ella Kate and Lizzie, and general chairman Chelsea Caraway’s sons Cannon and Colt photo bombed the picture, peeping through the sign at Bailey Park. It was all in fun as everyone is getting excited with the Strawberry Festival just days away.