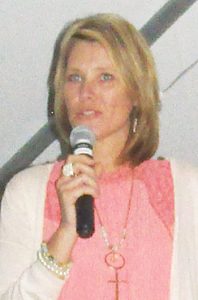 Medina was home to a great party for a good cause last Saturday night. The 20th anniversary Gibson County Dinner and Auction to benefit The Gibson County Carl Perkins Center for the Prevention of Child Abuse was a huge success.

The dinner and auction was held at White Oak Farms on Spring Creek Highway and included both a silent and live auction, a barbecue dinner, entertainment by No Time Flatt and featured guest speaker Susannah Lewis.

As guests arrived, they were told of their assigned table in the outdoor seating area under a large tent where the band played. While inside, they had opportunity to enjoy appetizers while viewing the vast variety of items available by silent bid. Michael Little served as emcee for the evening and made announcements throughout the night before opening up the indoor buffet line.

Once dinner was completed, auctioneer Brent Croom began the live auction. The guests were eager bidders paying top dollar for items donated for the occasion. All items won by the bidders are tax deductible.

The evening’s speaker, Susannah Lewis, brought bits of her life story in her known humorous way. “God knew I would recall a humorous memory to bring laughter back to me during my darkest moments,” she noted.

As of Monday morning, center officials estimated $17,000 had been raised by the dinner and auction.

Gibson County comes out strong every year to support the CP Center and the cause they represent. Gibson County Carl Perkins Center currently serves 380 children and families. All were reminded of the center’s belief that no child should have to tell their story more than once. 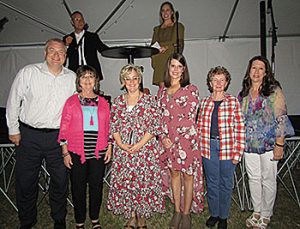