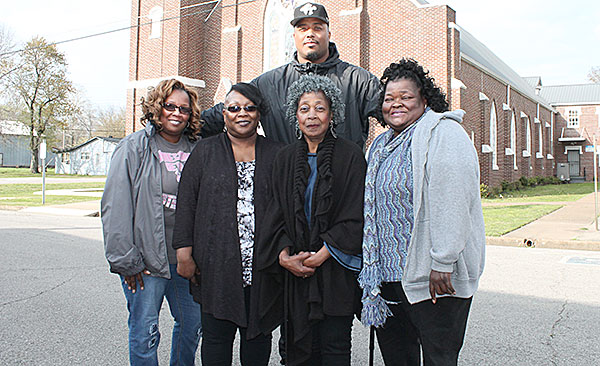 When the Relay for Life committee met a few weeks ago, one task ahead of them was naming an honoree. It was a unanimous vote for Humboldt Mayor Marvin Sikes as honoree. After all, Sikes had just been treated for prostate cancer.

But minutes after that meeting, Relay co-chair Mitzie Privitt saw a post on Facebook that altered the committee’s decision. Privitt suggested adding a co-honoree, Margaret Perry.

“We had just met and picked Marvin,” Privitt said. “That’s when I saw Margaret’s testimony on Facebook saying it had been exactly two years since her surgery. I sent out a text with a screenshot (of her Facebook post) and said we have to add Margaret. They all said yes.”

Perry is a dedicated supporter of Relay for Life and has been for many years. She came onboard with Morning Star Baptist Church’s Relay team while Ola Mae Mathis was team chair. Perry and last year’s honoree, Diane Glenn, got involved the same year.

“I think it was the third year for Relay,” Perry recalled of joining the church’s team in the late 1990s. “Morning Star had been onboard from the beginning. We have the best food!”

Perry and Privitt have been good friend for many years but actually met before Relay for Life. Privitt builds floats for the Strawberry Festival. Perry didn’t build floats but she assisted with the church’s floats. She would be the one to run errands to get supplies, many times getting them from Privitt. But it was through Relay for Life their friendship grew stronger.

After being a part of Morning Star’s Relay team, Perry got even more involved and became a co-chair. It was that year the committee decided to move the Humboldt event from Viking Park to Bailey Park.

“At Bailey park, I like the togetherness,” Perry said the new venue. “I like the food, the fun, the games—just being together. You really see (at Relay events) what other people (cancer survivors) went through.”

In 2015 during Thanksgiving, Perry noticed she wasn’t feeling well. She didn’t want to eat. Perry went to see her physician, Dr. Chioco. He found symptoms, Perry said, and set up another appointment with a family nurse practitioner for a second opinion. They both agree Perry needed to see a specialist.

“I did a lot of research when I was diagnosed,” Perry admitted. “I scared myself to death. I was searching everything I could find.”

Perry went to see Dr. Szych for a colonoscopy on January 28, 2016. She saw Dr. Kelly Harris on February 2 and had colon surgery six days later on February 8. She had Stage 2 colon cancer. Her friend, the late Diane Glenn, was also diagnosed with cancer the very same day.

Two days after the surgery, infection had set in and Perry was back in surgery.

“The second surgery was worse than the colon surgery,” Perry recalled. “I stayed in Jackson General for 20 days.”
Luckily Perry didn’t require any chemo or radiation treatment, although she did have home care after she left the hospital.

“At home, I didn’t want to lay in bed after laying in bed at the hospital. I stayed in my recliner,” Perry said. “I didn’t get out much. I wanted to stay at home.”

At this time in her recovery, Perry leaned on her family for support. She said her parents helped, as did other family members.

“I have a great family and lots of church support,” Perry noted. “They called and checked on me. They always wanted to help. But the biggest thing was their prayers. Every time I wanted to give up, the phone would ring or someone came to my door. God answered these prayers.”

Even when the pain was unbearable, it was the power of prayer that pulled her through.

“If you don’t have an open door and pathway to God, you are lost, truly lost,” Perry added. “There’s a higher power.”

Now, Perry still has check-ups with her doctors. In fact, she had an appointment last week. She will have another check-up in six months.

Perry, Sikes and the entire Relay for Life committee invite everyone to take that short drive to Milan and celebrate life after cancer, while also remembering those who lost the battle.