With big changes coming to Gibson County’s Relay for Life this year, one thing has not changed for Humboldt—naming honorees. Marvin Sikes, along with Margaret Perry, will be co-honorees representing Humboldt at Gibson County Relay for Life. (Perry’s article will be in next week’s Chronicle.) 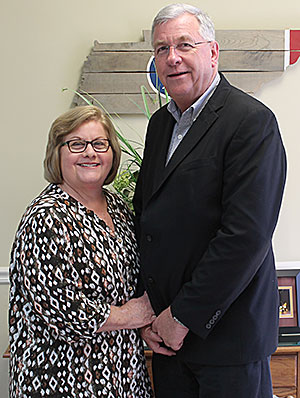 This year all five communities will join as one for Relay for Life. The big event will be Saturday, June 2 at Milan City Park. Relay events will rotate between cities and communities to host.

During a recent Humboldt Relay committee meeting, the group discussed who this year’s honoree should be, according to Mitzie Privitt, co-chair.

“Marvin’s name was the only one that came up,” Privitt said. “We vote Marv!”

But immediately after that meeting, Privitt sent committee members a text suggesting having two honorees, the second being Perry. She’s been here from the start, Privitt said of Perry being an important part of Humboldt’s first Relay for Life and all of them since.

“We’re doing M&Ms, Marvin and Margaret,” Privitt chuckled, “With both of their stories, we’re going to be strong.”

“I was there, day one, at the hospital cafeteria,” Sikes recalled of that first Relay for Life meeting. “All the ACS (American Cancer Society) people were there, hospital people, Humboldt Utilities, everybody. They brought this new idea, Relay for Life. I was a little doubtful but it’s been successful now for 20 to 25 years.”
Sikes, who is battled with prostate cancer, recently got a clean bill of health. He says it’s a relief but understands cancer can come back.

Sikes’ roll as a supporter for cancer survivors to being one himself makes him the perfect candidate for honoree, Privitt noted.
Sikes looked back over the years from the beginning to now of how Relay for Life has existed. Early on, campsites at Viking Park were elaborate. Viking Park was full, he said.

“Every factory, every business, everybody had a team. It got to be a competition at one point,” Sikes said of Humboldt support and evolvement. “If you want something done, bring it to Humboldt. We’re used to it. Look at the Strawberry Festival.”

Sikes says it was a lot of work putting on the main event. People worked all day long setting up, then stayed all night long until sunrise.

“It’s a big celebration but we always focused on curing cancer and making life easier for those going through cancer.” Sikes said. “My mom, who’s 91 years old now, walked in the first one.”

Over the years of Humboldt Relays, there are some skits that stand out in peoples’ minds. One of those Privitt remembers is Sikes, along with David Gill and John Mathis, doing their rendition of “Man of Constant Sorrow” from the movie “Oh Brother, Where Art Thou”. The trio dressed the part wearing ragged overalls and hats.

“That’s one of the most memorable (skits) for me, and others too because they haven’t forgotten it,” Sikes said. “Everyone liked it so much, we did it again at Trenton’s Relay, did it at Project Graduation and one night at church.”

Another funny skit Sikes witnessed, but wasn’t a part of, was Central Avenue Christian Church’s team rendition of the Village People. Sikes still gets a kick out of Jim Ryal playing the Native American Indian in the group.

Sikes recalled another skit by Humboldt Utilities team, which he was a part of—The Lawnchair Commandos. The guys were dressed in plaid Bermuda shorts, white tank-top t-shirts and hats. The choreography was difficult, Sikes said, with all the spinning, flicking the chairs and all the different moves. But it was all in fun while raising money.

Sikes remembers several years ago when Paula McGill brought her two young daughters, Katie and Emily, on stage to sing.

“That family is amazing and so talented,” Sikes said. “They (Katie and Emily) were already showing their talents. Now they’ve grown up and going their own ways.”

With all the fun times over the years, along with the hard work Sikes put into every Relay for Life, now he sees it from a totally different perspective.

“I had prostate cancer,” Sikes said. “I encourage all men to get a PSA. It’s a small blood test that could save your life.”
“Dr. Keith Kirby takes good care of me,” Sikes said of his family doctor. “He would always say, ‘Mayor, I got to keep you healthy’. He checks my PSA.”

It was during one of those tests Dr. Kirby found something concerning and suggest Sikes see a specialist. The oncologist did a biopsy that came back positive for cancer.

“He was very blunt,” Sikes said of his oncologist. “I’ve never had a doctor pray over me before. I knew then it was serious.”
“I asked what my options were,” he added. “He said if you don’t do what I tell you, it will be the biggest mistake of your life.”

Sikes went to Vanderbilt for a second opinion, which was the same diagnosis. He had prostate surgery on August 3, 2017 at Vanderbilt. The Doctor told him the surgery was successful and all the cancer was removed.

“My biggest fear was that it had gone farther than my prostate and into my body,” Sikes said of coping with cancer. “What kept me strong was prayer. I prayed a lot, my family prayed, citizens of this city prayed, it was unbelievable. They gave me strength.”

“Just before I was put to sleep the lady asked if I was scared,” as he was about to go under for surgery. “I said ‘no’ because I’ve had so many people praying for me. I still have people asking about my health.”

On March 9 of this year, Sikes got a clean report that he is cancer free. He will go back for retesting in September and have annual checkups each year.

His wife Carol stood by his side all during his journey fighting cancer. Sikes said he had a support group of men who had gone through cancer.

“I needed to hear what they had to say,” Sikes explained. “Now I want to share with other men. Take care of yourself. Get tested.”
During his treatment, surgery and recovery, Sikes praised his staff at city hall.

“My office staff and department heads stepped up to the plate and made sure the city was okay,” Sikes noted. “Vice Mayor Leon McNeal signed checks. We stayed in close contact, talking and texting. He was very helpful.”

Sikes invites all his friends and the citizens of Humboldt to take that short ride to Milan for Gibson County Relay for Life on Saturday, June 2 to celebrate life and to remember those who lost their battle with cancer.