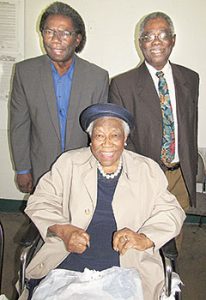 BURNETT AND SONS – Brooksie Burnett, who today celebrates her 100th birthday, was honored with a surprise birthday last Saturday. Two of Burnett’s sons were able to attend her special event. Seated at the head table with Burnett (center) were Freddie (left) and Eddie (right).

Brooksie Burnett, long-time contributor for the William Chapel column of the Humboldt Chronicle, was surprised last Saturday with an event at Bailey Park to commemorate her 100th birthday, which will be Tuesday, April 10, 2018.

Burnett, a life-long citizen of Humboldt, and current resident at Bailey Park Community Living Center, today celebrates her 100th birthday. Burnett is an avid reader and has published some collections of her work herself.

She began writing the William Chapel column of the Humboldt Chronicle in 1990 and continued writing faithfully until 2014. Burnett can be remembered for her colloquial style and remembrances of days gone by.

Saturday held an afternoon of celebration and honor for Burnett, a lady who has given much to the community.

Before Burnett was taken to her luncheon, ladies who hold her in the highest regard, gathered in her room at BPCLC and groomed her for the festivities to come. Friends Barbara Randolph and Marie Webb helped ready Burnett with clothing and makeup. Burnett was concerned that too much makeup had been applied.

“I don’t use a lot of makeup. I never did,” she remarked.

Her friends assured her that she looked beautiful. Niece, Phyliis Elliott, brought a hat for Burnett to wear, which completed the look that anyone who knows her, knows was just what she would have done for herself.

Before leaving the facility to attend the luncheon, Morning Star’s pastor, Quill Brabham, brought Burnett a bouquet of roses and balloons. Any reader of her column would recognize the words that came from her mouth as she exclaimed her trademark excitement phrase of “I thought I would fly out the window”, with “ I am going to fly out of this chair”, referring to the wheelchair she is now confined to.

The room at Bailey Park was filled to capacity with people who love and respect Burnett. The gathering place was decorated with love by those who hold her dear. There was a head table at which Burnett was seated along with two of her sons, Freddie Burnett and Pastor Eddie Burnett. Burnett’s other living son, Jimmy Burnett, who is also a resident at BPCLC, was unable to attend. Also at the head table were pastors who were part of the program.

Once Burnett arrived, many people were eager to take photos of her and with her. After the impromptu photo shoot, everyone settled to their places.

Bertha Perry welcomed everyone and then the official order of activities ensued. The Williams Sisters, a trio, sang a song loved by Burnett, that began with “What would my life be if it wasn’t for you Jesus?” Minister Joe Cox followed the Williams Sisters with another of Burnett’s favorites, “Jesus is Getting Us Ready for that Great Day”. This song was a crowd rouser with everyone in attendance singing along and clapping. The final song performed during this portion of the program was “Give Me My Flowers”. As this song was sung, a beautiful arm bouquet of roses what presented to Burnett, who was moved to tears of joy.

A scrumptious spread of food was ready and waiting for Burnett and guests after the food was blessed.

The City of Humboldt, represented by Marquita Patterson, presented Burnett with a proclamation in honor and recognition of the citizen she has been to Humboldt and her 100th birthday celebration. It was signed by Mayor Marvin Sikes.

Family and friends were prepared with speeches reflecting on the life Burnett has lived and all of the contributions she has made. Next, came the cutting of the cake, which featured a photo of Burnett. 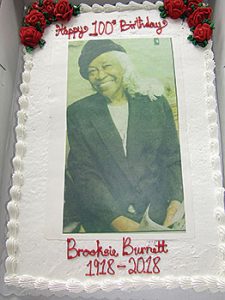 These days Burnett, who still attempts to write, spends most of her days with her son and fellow-resident at BPCLC, Jimmy. She sits by his side every day. She has lived and continues to live a life that sets the bar high for any who know her. She taught and encouraged many women during her lifetime, including friend Marie Webb, who Burnett mentored. As a result, Webb is also a contributor to the Humboldt Chronicle.

The last column Burnett wrote for the Humboldt Chronicle was June 25, 2014. It ended with a short poem by Christina Georgini Rossetti.

“If all were rain and never sun,

No bow could span the hill;

If all were sun and never rain,

There’d be no rainbow still.”

It is obvious that Burnett lived to know this to be true and perhaps Humboldt Chronicle readers would do well to reflect the same way.