The buzz—or should you say the cluck—of Tyson coming to Gibson County is still in the air. Humboldt and Gibson County residents are ecstatic about 1,500 new jobs and all the opportunities it brings. 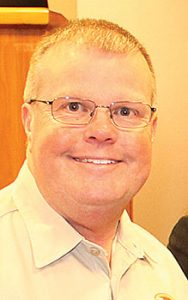 McCue, who comes from Marshall County, Tenn. has been with Tyson for 24 years. Also attending the meeting were live production manager, David Corvin, and Humboldt’s own Megan Reece, who is the administrative assistant.

Corvin’s responsibilities in Humboldt will be with the hatchery, the feed mill and the live contract producers.

“Everyone has treated me like they’ve known me all my life,” McCue of Humboldt and Gibson County opening the doors with open arms.

McCue said the Humboldt project will be Tyson’s first new plant since 1996 when the Obion County factory was opened. Both Humboldt and Obion County facilities are processing plant but each has its own specialty. Obion County makes chicken nuggets for McDonald’s. The Gibson County plant will make tray packs of fresh chicken.

McCue gave an overview of what people can expect once the facility is up and running. Most notable is the use of robotics in the factory. He noted this brings in specialized AMT (automated tech) jobs to run and maintain the robotics. The other seven Tyson tray pack plants do not utilizes robotics, so Humboldt will be the pilot robotics program.

McCue met with Jackson State Community College last week and said they have a good program that will fit with some of the robotics and AMT jobs needed at the Humboldt plant.

A few weeks ago it was announced Tyson was purchasing three Gibson County granaries in Fruitland, Dyer and Kenton. The company will close on those this week and should be operating in April. This is also a first for Tyson to own and operate their own granary elevators. A plus with these granaries is railroad access for shipping.

McCue said ground-breaking on the main plant has been pushed back due to wetland and stream that runs through the GC Industrial Park. Once all the state environmental permits are approved, ground breaking could be as early as April but won’t know until they have all their ‘chicks’ in a row.

Tyson will have a separate hatchery facility in the Humboldt Industrial Park beside American Woodmark and FedEx. As for now, Tyson headquarters are located on Main Street.

Currently, Tyson is in the process of building the management team with approximately 100 jobs available. They hope to begin hiring team members (employees) by mid 2019.

McCue offered the plans once the factory is up and running. They hope to be operational by April of 2020 and will start up slow, then add more production and staff. By the end of 2020, the Humboldt plant should be running at half capacity. The following year they hope to be a full capacity, processing 1,250,000 birds per year.

Inside the plant, different areas must be kept at certain temperatures.

McCue said the Humboldt production line will be more streamline. There will be a storage room large enough to hold 75 truckloads of boxed tray packs ready to be shipped out. This room will be kept just above freezing.

McCue said the shelf-life for chicken is 15 to17 days from being processed until it leaves the supermarket shelves and is on the dinner table. He noted that boxes of products typically leave the plant that day or the next day.

McCue said Humboldt has been great and going the extra mile to make sure all goes well with every aspect, from construction, all the way to start-up day and beyond.