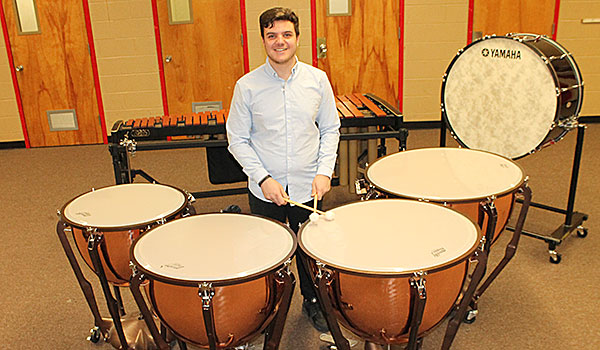 EXCHANGE STUDENT – Federico Pili, known as ‘Fede’ here in Humboldt, is an exchange student from Milan, Italy. Pili is living with his host family, John and Heather Glenn-Hoekstra, and taking band at Humboldt Jr./Sr. High School under her direction.

For one Humboldt student this year, being in the United States was a bit of culture shock. Federico Pili is an exchange student from Milan, Italy. His host family is John and Heather Glenn-Hoekstra, and their daughter, Laurel.

The Glenn-Hoekstras applied to be Pili’s host family last year while living in Clarksville, Tenn. When Heather accepted a job as band director at Humboldt Jr./Sr. High School, it created more paperwork in order to transfer Pili from Clarksville schools to Humboldt schools.

Pili said it was strange picking up and moving after three weeks attending school in Clarksville. He had just begun making new friends and getting a feel for the school.

Another hurdle in moving from Clarksville to Humboldt was finding a temporary host family while the Glenn-Hoekstras were packing up and moving back to her hometown. Luckily Lori Coleman agreed to be a host during the transition period.

“It was kind of weird living with one family, then another,” Pili admitted. “But after a few days we were all friends, laughing and talking.”

Living in the U.S., seven hours different from Italy, posed a small problem keeping up with his family in Milan. They would Facetime on weekends.

“I would call around 1 (p.m.) here, which was 8 (p.m.) there,” Pili said. “They would put the iPad at the table while eating. It was like I was having dinner with them” 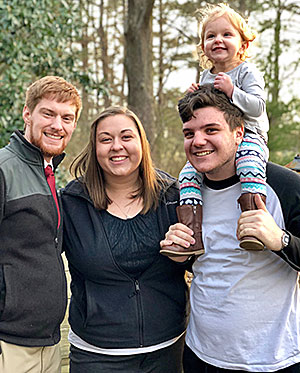 Moving from one school to another was another challenge. The exchange student program had to agree to the move. Top that off with coming into the school year late, there were limited classes available to take at HJSHS. His first semester here, Pili’s classes included economics, chemistry II, journalism and band (where Glenn-Hoekstra is director). This semester he’s taking history, applied mathematics concepts and AP English IV. Pili made the principal’s list (all A’s) with a 95 average.

Pili explained how school is different here in the states compared to Italy. Here, students take courses in order to receive credits needed to graduate. They change classes throughout the day and take new courses each year. In Pili’s school in Milan, students choose a path. Classes are built around that path and the same students may be in the same group for four or five years. They do not change classes during the day. They take tests to see how far along they are in their studies before moving to the next level.

Pili is taking mechanics in Italy where they study and train on manufacturing and robotics. Pili said he would be tested when he returns to school to see where he will be placed.

Here at Humboldt taking senior classes, Pili will walk during graduation ceremonies this year. When he returns to Italy, he will still be in school until he finishes the final mechanic course. He must pass the exams before he graduates.

Prior to coming to America, Pili had not taken band but that didn’t stop Glenn-Hoekstra from recruiting him to be a part of her band.

“He joined the band but had never played an instrument,” Glenn-Hoekstra said of her new student. “He played percussion and bass drum in marching band and plays all percussion in concert band.”

Apparently Pili took to music with ease. At a recent area competition, he received Superior Rating, the highest rating possible.

“There are no sports or band in school (in Milan), it’s only for education,” Pili said of another difference between cultures.

Now here for a few months, Pilli has made many new friends. That is the best part of the exchange student program, he noted.
His least favorite part of living here is no public transportation. In Milan, he could hop on a bus or train and get to any part of the city he wanted to go. Here Pili said he is dependent on asking someone for a ride.

When Pili arrived in the United State, he stayed in New York City for three days during an orientation period. Now after enjoying his experience so much, he has applied to be a summer ambassador for the exchange student program. Hundreds of exchange students apply to be summer ambassadors. Pili was among the 150 called to interview. He will know later this month if he is accepted into the program.

If he’s not accepted, he will return to his home in Milan in June. If he is selected he will stay an extra month in New York before returning home.

Being an exchange student is a once in a lifetime experience. Pili has made so many new friends who will continue to stay in touch.