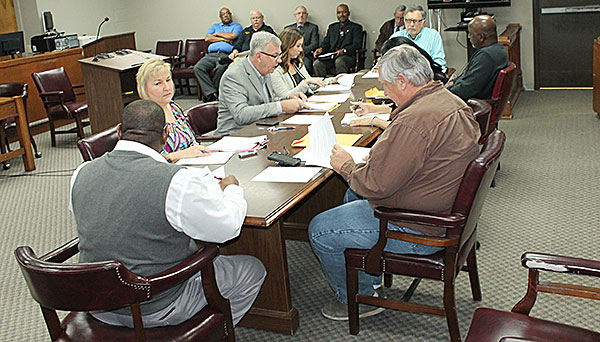 CITY BOARD AT WORK – The Humboldt Board of Mayor and Aldermen had a number of agenda items to tackle last week including the resignation of Police Chief Rob Ellis and appointing Reynard Buchanan as interim chief.

During last week’s Humboldt City Board meeting, board members were confronted with a major decision that will impact the entire city. Humboldt Police Chief Rob Ellis officially turned in his resignation.

Chief Ellis had made it known he would be retiring in April but officially turned in his resignation, which was on the meeting’s agenda.

“Chief Ellis has done an awesome job. It’s a hard job,” Mayor Marvin Sikes said during the meeting. “They deal with crime so we don’t have to.”

Ellis asked to address the mayor and board.

“I started in 1998,” Chief Ellis said. “Not by accident. The Lord called me to be a police officer. Four years ago I came in, first as interim, then chief. It’s a tough job with challenges every day.”

Ellis thanked the mayor and board for allowing him to serve the citizens of Humboldt. He also praised the police force he works with every day.

“We have a very good force,” Ellis said. “Are we perfect? Nope! Will we be? Nope! But that’s with all police departments. It’s been an honor to serve but it’s time to move on.”

While addressing the board, Ellis campaigned for Assistant Chief Reynard Buchanan to fill the position. Buchanan has been Ellis’ right hand man and second in command since Ellis became chief.

“Assistant Chief Buchanan has been loyal (to Humboldt) and does an amazing job.” Ellis told the board. “He knows the force. He knows the city. Let him do his job.”

As united as the board was to accept the chief’s resignation, they were not as unified on appointing his replacement.
Mayor Sikes asked the board to honor Ellis’ recommendation to move Assistant Chief Buchanan into an interim position.

But board member, Leon McNeal, wasn’t ready to turn the keys over to Buchanan. “We need to take applications,” McNeal said. “I want to give everyone a chance.”

Board member Bob Pruett asked why do it now since there is almost two months before Ellis’ last day.

“In my opinion, you do it now and let him ease into the job and get started,” Chief Ellis said. “You have the Strawberry Festival coming and we’ll get ready for that. He will have to get his chain of command.”

City attorney, Terri Crider noted the city’s charter states the Mayor and Board of Alderman shall appoint (a chief).

Alderlady Donna Johnson added, “Our charter says ‘appoint’, there will have to be a chain of command. There’s lots of planning.”

“It’s not a conflict with the charter if we post for the job, then appoint,” McNeal noted.

Mayor Sikes said the board should follow the charter and called the decision “plain and clear” with the board’s responsibility to appoint a chief.

McNeal said he doesn’t have a problem supporting Buchanan but he wants to give everyone a chance to apply for the position. McNeal added that he and Buchanan had talked. But McNeal refused to vote to appoint Buchanan as interim chief and said he would ‘obtain’ (abstain) from voting.

“We have a serious discipline problem in our department,” board member Don Graves said out of the blue and off topic.
After all the discussion, Pruett, Johnson, Shivers and Graves voted to appoint Buchanan as interim chief. McNeal said he “obtained” (abstained). Buchanan’s was appointed by a vote of 4-0-1.

•The board approved the sale of 26 acres at the Humboldt Industrial Park to Tyson Farms, Inc. at a cost of $260,000. Mayor Sikes said it is the property on the backside of city’s industrial park behind American Woodmark. He noted the property hasn’t seen any activity for years.

McNeal asked where this money would be used since it’s not in the budget.

•Over the past year or more, some board members had asked the mayor to have someone address the board on drug testing and background checks of city employees.

“I’ve talked with all my department heads and they don’t have a problem with it,” Mayor Sikes told the board of drug testing. “This will help with background checks as well.”

The board asked June questions such as how many clients his company has, if the tests are random and the costs.

June said he has approximately 600 clients throughout Tennessee such as factories—both small and large, several municipalities and businesses in both the public and private sectors. He said they offer both random drug testing and pre-employee drug tests.

The cost is $50 per test and you pay as you go, June told the board. There is no retainer to keep the company’s services.
He suggested testing be done for “safety sensitive personnel” such as police, firemen and CDL drivers. Mayor Sikes said he wanted the Public Works department to be included.

Since this agenda item was for discussion only to allow board members to gather information and facts, no vote was taken.

“This is not to be vindictive,” Mayor Sikes said. “We’ll vote at our next board meeting.”