Ten minutes.
It took less than 10 minutes for one deeply troubled kid to destroy the lives of 31 people and every person they ever knew or loved. At approximately 2:20 p.m. on February 14, a 19-year-old former student walked unchecked into Marjory Stoneman Douglas High School in Parkland, Florida, and took the lives of 17 students and teachers, and wounded 14 more.
In less than 10 minutes, the shooting was over. The killer had disposed of his weapon and blended into the frenzied mob as they desperately tried to escape from one of the few places they should expect to feel safe.
When parents of MSSD students tuned into the national news that night, they were shocked and saddened by the senseless loss of life. Their hearts broke for the families in Parkland, but from deep down, something whispered to them. A voice that echoes from the very core of every parent’s soul; one that can paralyze you with fear as you lie in bed at night.
The voice that reminds you, “That could have been my baby.”
That terrifying realization is one that many Milan police officers and MSSD staff members shared as they witnessed the tragedy in Florida unfold. The following day, Director of Schools Jonathan Criswell scheduled a meeting with law enforcement officials and administrators from each school to review the district’s course of action in the event that a similar attack should take place here in Milan.
“Most of my officers have kids in those schools,” said Milan Police Chief Bobby Sellers. “My kid goes to school here. We are going to so everything in our power to make sure Milan’s schools are safe.”
Fire safety procedures were the main topic of concern, after it was revealed that the Parkland shooter had pulled the fire alarm inside the high school. More than one school shooter has employed that tactic and Director Criswell stressed the importance of having a plan in place at all schools that would determine whether or not there was an actual fire before students were sent out into the hallways.
“We need to get eyes on that area before you send the student body outside,” Criswell told his administrators. Milan High School Principal Greg Scott noted that it would only take 5-8 minutes to identify the source of the fire alarm. Milan Middle School Principal Chris Jones also noted that his members of his staff have been equipped with walkie-talkies and could relay that information back to the administrators quickly.
The panel also discussed the possibility of conducting drills that would not only evacuate the students from the building as if there was a fire, but get them back inside quickly and under lockdown should there be a threat outside. The chaos that would ensue from such a situation posed a concern, but Principal Scott stated that he felt the teachers would maintain control of the situation.
“When something like that is happening, those 25-30 students that you’re in charge of are your world,” Scott said. “If something like that were to happen, we would much rather have a missing kid than the alternative.”
Teachers and staff in the MSSD have already begun to conduct active shooter drills, but Director Criswell took that one step further, suggesting that MPD officers begin conducting active shooter drills with both teachers and students present.
Principal Scott also stated that the staff at MHS has been running scenarios with his staff involving an unidentified person on campus. Scott stated that staff members from other schools who are not known to the MHS staff have assisted in the drills by attempting to gain access to the schools, and have done so unsuccessfully.
“The office staff knows our students and many of their parents, and I’m confident that we can identify anyone that does not belong on campus,” Scott said.
Transportation and Safety Supervisor Kevin Ellison, who was also in attendance at the meeting, also discussed preparedness should an incident occur while students are on the bus. School Resource Officer Nick Glenn, who is stationed at Milan High School, noted that students have several avenues to contact SROs and the police should they need assistance, but many on the panel felt that it would be worthwhile to train the older students in how and when to contact police. SRO Glenn stated that students would be reminded to use the School Tip Line – 731-388-3385 – should they witness suspicious or potentially threatening activity. Lt. Glenn also noted that the MPD routinely checks its social media accounts, and Chief Sellers stressed that all tips reported through the Milan Police Department’s smartphone app go directly to his cell phone.
The MSSD and the MPD will continue to work together in the coming weeks and throughout the year to make sure that students in all of Milan’s schools are safe and prepared for any and all threats. 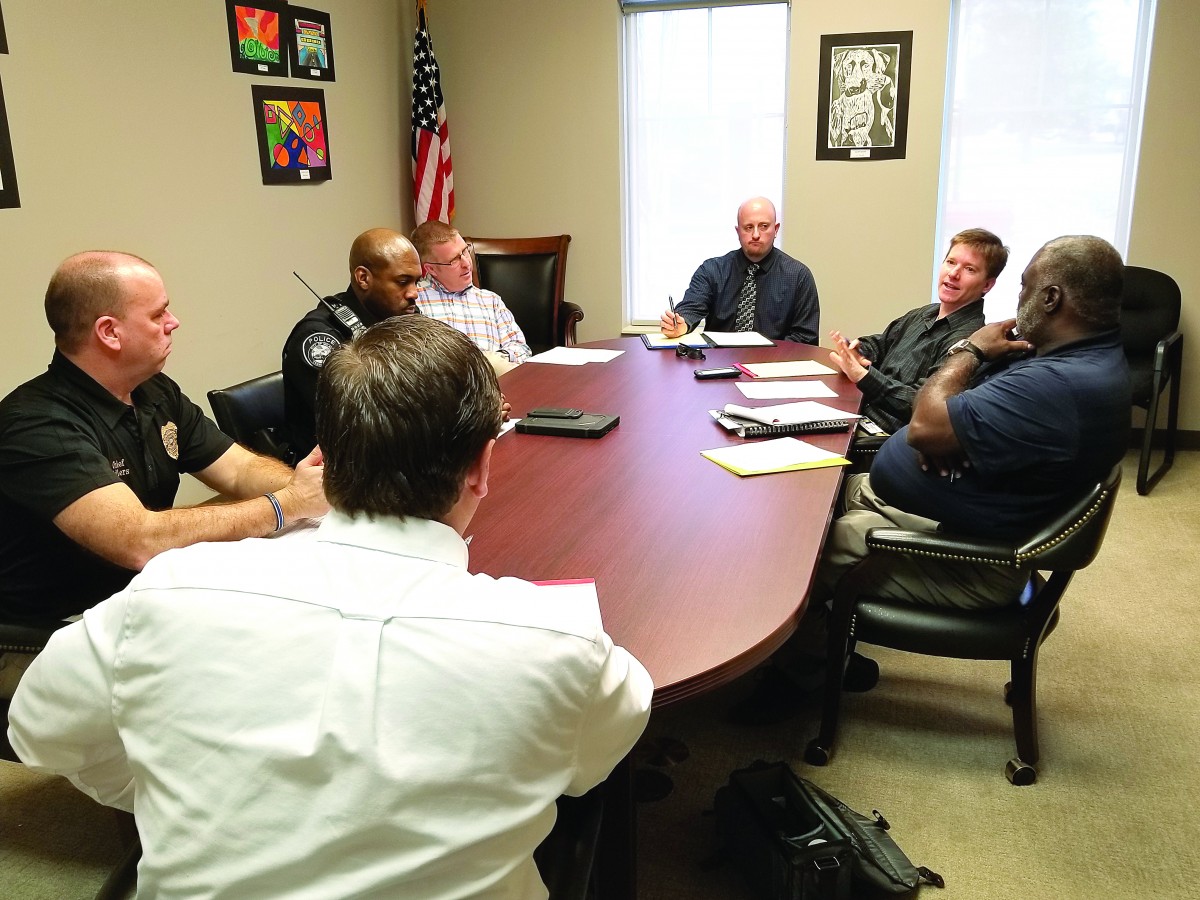