Comments made by at least one student from South Gibson County High School in a group Snapchat thread caused all three Medina schools to go on lockdown early Friday morning.
Sheriff Paul Thomas stated that the Gibson County Sheriff’s Office was made aware of the comments around 9:00 a.m., though no actual threat was ever made.
“The kids were all using aliases,” Sheriff Thomas said. “One kid asked another if they would ever shoot up the school. That kid replied, ‘No. Why would I ever do something like that. That’s not funny.’”
Sheriff Thomas stated that the second student started a new group chat, and told the other students in the group that the first student seemed to think school shootings were funny.
Sheriff Thomas stated that a student took screen shots of the comments, then informed SGC administrators and School Resource Officer Dwayne Clark.
Deputies with the GCSO and Medina Police Department officers maintained a strong presence at Medina Elementary, Medina Middle School and South Gibson throughout the morning until the lockdown ended shortly after lunch. Once parents received word of the lockdown, many rushed to check their children out of school.
The lockdown came after a number of schools in West Tennessee dealt with similar threats. Two students in Humboldt were arrested after filing a false report about a school threat that never existed. Obion County Schools and Union City Schools went into lockdown last Thursday following a threat on social media and, in the past week, two separate incidents have resulted in charges for students at Westview High School in Martin.
“It’s very disruptive. I guess these kids think it’s funny, but they’re walking a fine line,” said Sheriff Thomas. “We have to take all of these rumors very seriously.”
Sheriff Thomas stated that the GCSO had contacted Snapchat and requested the user’s identity from the first student in question, and would issue a subpoena for the information if necessary.
“Once we get that information, we will provide it to the District Attorney to determine if any criminal charges will be filed. The student that we were able to identify was very cooperative and did nothing wrong.”
Sheriff Thomas noted that Gibson County Special School District Director of Schools Eddie Pruitt had stated that once the user information became available, the system would take action against the student responsible. 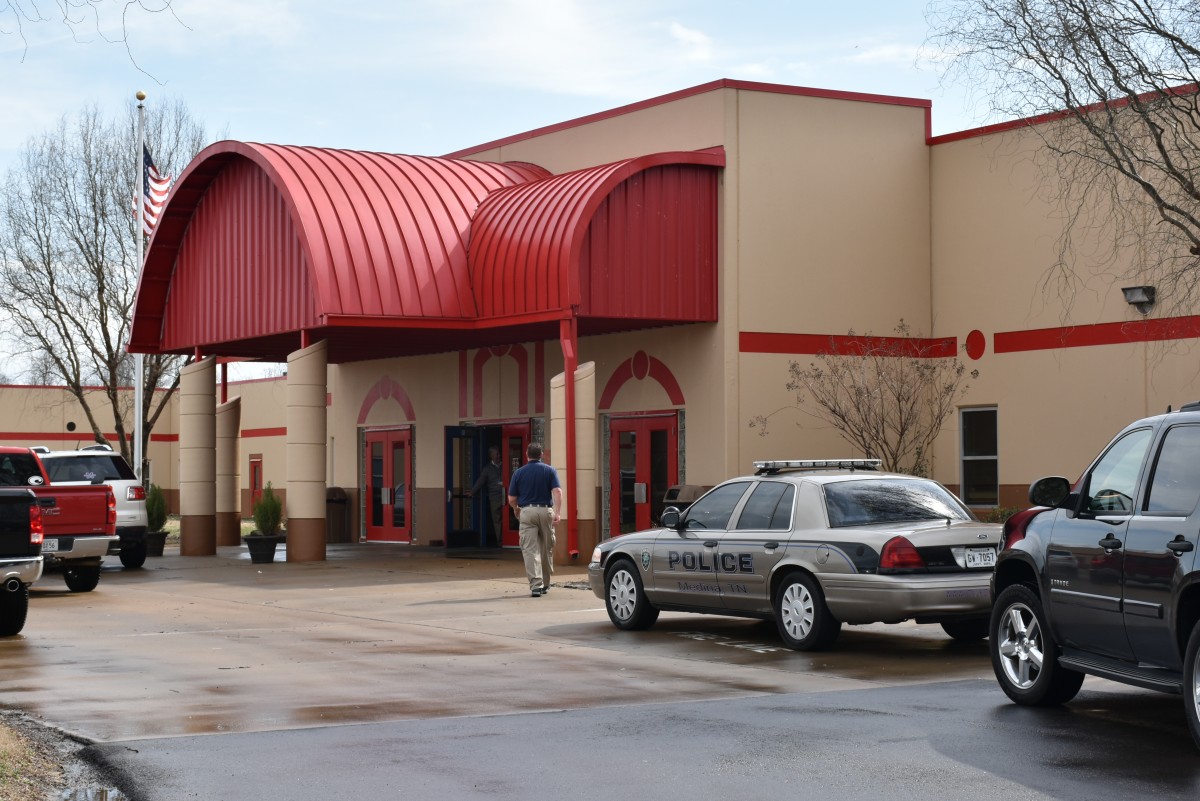 SCHOOLS ON LOCKDOWN – Medina Middle School Principal Steve Maloan stands at the front door, along with two armed officers from the Medina Police Department, as parents rushed to pick up their children following a lockdown at all three Medina schools Friday morning. The lockdown came after a student at South Gibson County High School reported Snapchat comments to school administrators. Photo by Logan Watson.