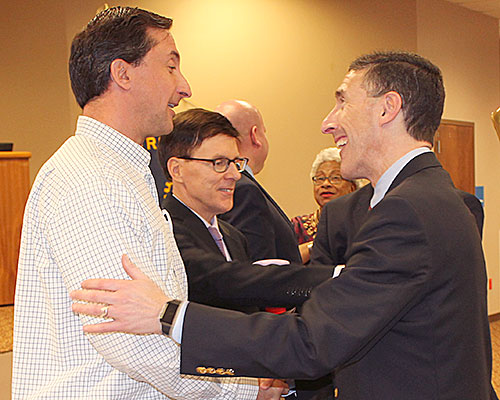 The Humboldt Rotary Club had the honor and pleasure of having Congressman David Kustoff as their featured speaker last Friday. It has been a long-standing Rotary tradition to have the sitting congressman address the club at the beginning of the year. Kustoff represents the 8th Congressional District.

Kustoff, who hails from Shelby County with his wife Roberta and two children, told the club that a lot has happened in 2017 in Washington D.C.

“The biggest, substantial vote was tax reform,” Kustoff said. “We haven’t had big tax reform since 1986 under President Ronald Reagan. It took them two and a half years to get it done. It took us less than a year.”

Kustoff said tax reform passed is good for the economy and noted it could not have been done without President Donald Trump.

“Taxes were cut at every level,” Kustoff added. “The net withholding is less, which put more money in your pockets. It’s a game changer.”

Tax brackets were lowered and widen as well, giving a married couple $24,000 tax deduction and $12,000 deduction for individuals.

“One company here in Tennessee is seeing employees getting $15 to $20 more each week on their paychecks,” the congressman said. “That’s around $1,000 a year. That’s not crumbs.”

On the corporate level, Kustoff said the U.S. is already seeing results with over 300 companies giving bonuses to their employees, raising wages, expanding their operations and making contributions to pension plans. The corporate tax rate was 39-percent, which was fourth highest in the world. But under the new tax bill, it is reduced to 21-percent, which is slightly below the world average of 22-percent.
Kustoff said many American companies had millions and millions of dollars parked outside the United States due to the high corporate tax rate.

Another big issue tackled in Washington was the rolling back harmful regulations, according to Kustoff. Over the past 10 years, regulations were out of control and the government was growing too big. He said 1,500 regulations were cut in less than a year under the Trump administration.

Kustoff briefly touch on welfare reform and believes it could be difficult to get a bill through. A bill being worked on by the House will focus on getting able-bodied people off welfare and into good paying jobs where they can contribute by paying taxes and have pride in themselves.

Technology and securing technology was another topic Kustoff touched on. He said the country is seeing more and more data breeches and hacks than ever before. People’s personal data is being stolen. Large companies are being hacked with information being compromised.

One big topic at the moment is President Trump’s plan for infrastructure.

“Our roads, bridges, waterways, utilities are in need of repair,” Kustoff said. “The President has proposed $1.2 trillion to revamp the country’s infrastructure. Of that $200 billion would come from the federal government and the remainder from public or private partnerships.”

Kustoff was asked his opinion on North Korea.

The final topic Kustoff addressed was immigration and immigration reform. There is a bill in the House, Securing America’s Future Act that has four key components, Kustoff said.

The first portion of the bill refocuses legal immigration on skills needed in the United States. This component would end the Visa lottery. It would protect the nuclear family of spouses and minor children but not allow cousins, aunts, uncles or other distant relative. It reduces the immigration levels by about 25-percent or by 260,000 per year while increasing the number of green cards for workers needed in the U.S. by 175,000. It would send additional ICE agents to more high-risk embassies overseas to vet visitors and immigrants.

The second component of the bill deals with securing our borders, both north and south. It includes building a border wall while adding more cameras, sensors and drone surveillance. There would be infrastructure for hard-to-reach areas of the border. It would improve and expand ports of entry along the southern border. There would be 5,000 additional border patrol agents and 5,000 CBP officers. It calls for transferring $33.5 billion from the U.S. Treasury to fully fund construction, personnel and technology.

The third segment of the bill deals with illegal immigration. Employers must check to see that they are only hiring legal workers. It authorizes the Department of Justice to withhold law enforcement grants from sanctuary cities and allows victims to sue the sanctuary cities that released their attackers. It enhances criminal penalties for deported criminals who return illegally. It allows the removal of illegal immigrants for being gang members, those convicted for aggravated felonies, not registering as sex offenders and those who have multiple DUIs.

The final part of the proposed immigration reform bill deals with DACA (deferred action of childhood arrivals). Individuals who received deferred action on the basis of being brought to the U.S. as a minor will get a 3-year indefinitely renewable legal status allowing them to work and travel overseas. No criminals, gang members or those with criminal convictions in juvenile court for serious crimes are eligible.
Kustoff told Rotarians his plans and areas of need the federal government must address.

“We have to work on infrastructure, healthcare and immigration,” he noted. “I’m ready to work with my colleagues to get this done.”