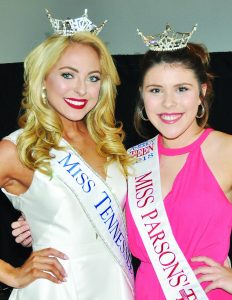 Girls from two to 92 worked the runway during the Miss Amazing West TN pageant in Trenton Saturday.

Maddie Vernon, a junior at Peabody High School, hosted the pageant for girls and women with special needs, with Miss Tennessee Caty Davis as her special guest.

Vernon is Miss Parsons and will compete in the Miss Tennessee Outstanding Teen pageant in Jackson in March. She chose Special Olympics as her platform because her aunt Debbie Reis has Down syndrome, and her mom Katey Vernon is a Special Education teacher.

Both Miss Tennessee and Miss Tennessee Outstanding Teen are part of the Miss America organization. Miss Amazing is also recognized nationally. It began in 2007 in Omaha, Neb. Jordan Somer, who like Maddie enjoyed volunteering with Special Olympics in her community, founded the pageant.

Vernon has been involved with Gibson County Special Olympics for years and volunteers at the annual Field Day. As Miss Parsons, she has hosted a fundraiser for Down syndrome awareness and a Special Olympics bowling day.

A trio of judges were tasked with encouraging participants and finding appropriate titles for each. They crowned the girls with monikers like Miss Shy and Kind and the women with titles such as Miss Luscious Locks. Every participant received a crown.

Miss Tennessee is spending her year as the Governor’s Ambassador for Character Education. Davis chose respect as her character trait and said it fits perfectly with Miss Amazing.

“Each individual is unique,” she said. “We all have different things to overcome.”

Davis travels the state speaking to school children and said she encourages them to practice kindness and be compassionate. During the Miss Amazing pageant, she announced the winners and took selfies with each participant.

“This means a lot,” she said. “This is an empowering place. I’m happy to be here.”