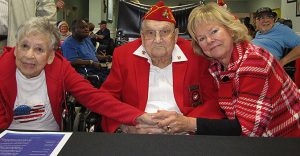 MARINE CELEBRATES 100TH BIRTHDAY – Bettye Pat Pallessen (left) is a sister to John Winsler (center), who celebrated his 100th birthday on Monday at the Tennessee State Veterans’ Home in Humboldt. They are joined by Winsler’s daughter, Benita Winsler Watkins (right).

Humboldt had the opportunity on Monday to celebrate another centenarian as John Winsler celebrated his 100th birthday at the Tennessee State Veterans’ Home in Humboldt.

In the company of friends, family and friends of the military and veterans, retired Marine Sergeant John Winsler, originally from the Memphis area, celebrated his 100th birthday on Monday, February 5, 2018.

Winsler voluntarily served his country during WWII in the artillery division of the United States Marie Corp. For 40 years after the war he ran his own hardware store. He raised his family in the Memphis area. The family thinks Winsler may be the oldest Guadalcanal survivor in Tenn.

Winsler has been a resident of the W.D. Bill Manning Tennessee State Veterans’ home for just over four years, after he broke his hip in a bicycle accident. Winsler’s daughter, Benita Winsler Watkins, credits the home with her father seeing his 100th birthday.

“They treat him like he is their own father,” Watkins said of the Humboldt staff. “It is a family here,” she added.

No less than two cakes were among the delicacies served in Winsler’s honor. An honorable program was dedicated to him. It included remarks and presentations by two USMC detachments, a governor’s proclamation made by TDVS Commissioner Many-Bears Grinder, a Gibson County proclamation presented by Sheriff Paul Thomas, a city of Humboldt proclamation offered by Mayor Marvin Sikes as well as remarks by TSVH Humboldt Administrator Shawn Wall.

It is a remarkable feat to reach the ripe old age of 100 years. Tennessee State Veterans’ Home and their invited guests went above and beyond in an effort to treat Winsler with all of the honor he is due for serving his country.