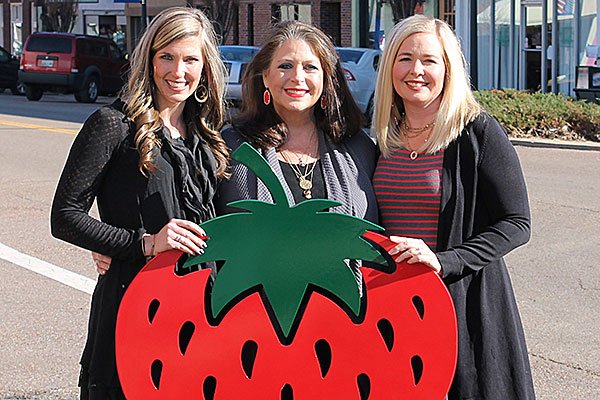 WTSF HONOREE – West Tennessee Strawberry Festival president, Melissa Swingler (right) and general chairman, Chelsea Caraway (right) proudly announce this week that Mary Key Roe will severe as honoree of the 81st Strawberry Festival. Roe says she can’t remember a time she was not involved in the festival one way or another. She was Hostess Princess in 1972 and has served and chaired several festival committees.

A former beauty queen and Humboldt royalty will add another jewel in her crown. Mary Key Roe will serve as honoree of the 81st annual West Tennessee Strawberry Festival this May.

Roe proudly wore the crown as Hostess Princess in 1972, the last year the pageant was held outdoors at the Horse Show area on Elliott St. Now as honoree she is following in her father’s footsteps. Parker Williams was festival honoree in 1998.

The process of asking Roe to be honoree was an awkward conversation.

“She works the graveyard shift,” Swingler explained. “I texted her and said can you call me? I need to talk to you about Strawberry Festival. Mary Key said, ‘What can I do?’ I said you don’t have to do anything, just be honoree!”

“The lady working next to me (at Jackson-Madison County General Hospital where Roe works) thought something was wrong,” Roe chuckled. “I immediately started crying. I told her I was fine.”

Roe accepted the invitation to be honoree right then and there over the phone. She follows in her dad’s footsteps, Parker Williams, who was also a festival honoree. 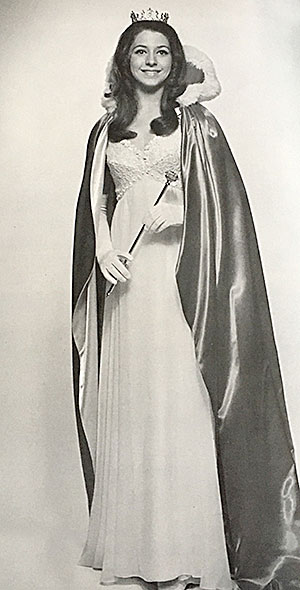 Roe has been involved with the Strawberry Festival her entire life.

“Growing up, I never remember a time I wasn’t part of the Strawberry Festival,” Roe said last week. “My parents built floats. I rode floats until I was in junior high.”

“Santa brought me the winning dress,” Roe recalled. “I got up early and saw the dress. I couldn’t go back to sleep after that.”

Even though she was crowned Hostess Princess, Roe said she wasn’t your typical pageant girl. Her only other pageant was competing for Miss Knoxville, which was a preliminary for the Miss Tennessee Pageant.

But her mother was always involved in pageants as a member of the Territorial Revue Committee.

“I assisted her while I was in high school,” Roe said. “We would work on numbers and decorations at home.”

After college and moving back to Humboldt, Roe continued to be involved with the festival. She stayed on to help the Territorial Committee with her mother. Years later, Roe became committee chair and still holds the position.

“We made sure Grey (Barker, her oldest son) rode on floats from the time he was seven,” Roe said. “Mary Elizabeth (her daughter) came along several years later and he (Grey) rode one more time so they could be together.”

Her youngest son, Will Parker Roe, also rode on floats and competed in the Junior Host and Hostess Revue.

During those years, Mary Key and husband Bill, built floats for several years. A few families would get together to build floats. One of those families was Mike and Lujuana DeBerry, general chairman Caraway’s parents. Mary Elizabeth and Chelsea were close to the same age and rode floats together.
Bill and Mary Key have always been hospitable, opening up their home to hundreds festival guests over the years.

“At the time we lived on Main Street where my grandmother grew up,” Roe added. “The night before the parade, I was so excited I would get up at 4 a.m. to sweep off the sidewalks. The men would pull the float at 3 a.m. to get in line. They stayed all night.”

Over the years, Roe has served on other festival committees including the Recipe Contest Committee, the Queens’ Luncheon Committee, the Magazine Committee and the Horse Show Committee where she was secretary. To this day, Roe says the Horse Show is one of her favorite events and assists in presenting the trophy and bouquet of flowers to the winning horse. But the Territorial Queen Committee is where her heart is.

“I started on the Territorial Committee in 1979 and been on it ever since,” Roe said. “I co-chaired with Tara Jones and then Mary Elizabeth came on board. Lujuana (DeBerry) and Nan (Sanders) were there too and did a lot of the work with the contestants and their mothers.

“Her personality—she’s always smiling,” Swingler said of Roe being the perfect choice as honoree. “She’s easy to talk to and tries to help everybody and make them feel special.”

“When I was in the Hostess Princess pageant, Mary Elizabeth won and I was her first maid. We all felt like queens,” Caraway echoed Swingler’s words of Roe making people feel special. “Her passion for the festival is so obvious.”

Mary Elizabeth was crowned Hostess Princess in 2002, 30 years after her mom won the same title.

With Roe being honoree and two younger generation ladies as president and general chair, there’s a good blend of experience and excitement ahead for the 81st West Tennessee Strawberry Festival.

“We want the Strawberry Festival to be new and exciting but not lose it’s tradition,” Swingler said. “We need more people like Mary Key.”

“I’m very humbled and feel very undeserving,” Roe said of being honoree. “But I can say there is nobody in this town that loves the Strawberry Festival more than I do.”