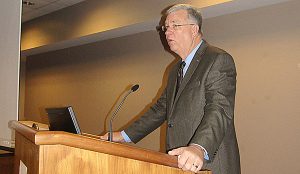 The third annual Mayor’s Business Breakfast held last Thursday was another success. Over 100 businessmen and women gathered for this meeting sponsored by the Humboldt Chamber of Commerce.

Mayor Marvin Sikes gave a 30-minute speech recounting the accomplishments of 2017 and what the city has to look forward to in 2018.

As everyone finished their morning meal, Love presented an eight-minute video featuring Mayor Sikes. The video was titled “What Do You Love About Humboldt?”.

In the video Mayor Sikes spoke about the future, stating that in his view, five years from now Humboldt will be a different city with new industry and new people. To accommodate the new growth, the mayor predicts there will be new homes built and utility expansions.

Sikes was introduced by Love as the day’s featured speaker. He immediately expressed his thanks to the best chamber in America, Humboldt Chamber of Commerce. Sikes thanked the

Humboldt aldermen that he works with, his office staff, department heads and city employees.

Sikes reiterated his stance, “It’s we, not me.” Sikes continues to credit the team effort that drives Humboldt forward and that this forward momentum is not solely due to him.

With his special humor that he brings to every encounter, Mayor Sikes recalled some highlights of 2017. He recollected on the eight weddings performed in 2017 (bringing his total weddings officiated since taking office to 22), his health issues of which he remarked, “Cancer is not nice”, meetings, church programs and funerals attended.

“I love being called Mayor,” Sikes added. “This is the best job I have ever had.”

His genuineness shines through as he attests his love for Humboldt and chants “Go Vikings!”

Bringing the meeting to 2018, Sikes spoke on the fact that he would be swearing in new school board members at the next school board meeting. This, said Sikes, goes to show the strength of the relationship between the city and the school system.

Continuing to speak on 2018 projections, Mayor Sikes said the city projects that sales tax will be up. The city collects $165,000, on average, per month. The city of Humboldt gets one-third of that. Retail sales are over $160 million per year with the largest retailer getting only $80 million of that amount. Sikes made the point that there is money being spent in Humboldt. Humboldt can and does support small businesses.

The city budget is very conservative. No money is spent unless it has been budgeted.

“In fact,” added the mayor, “We are in need of a trackhoe. It is not in the budget. So rather than pull from another category that needs its budgeted dollars, we are saving for a trackhoe.”

Sikes said that the next five years should be interesting.

“We don’t know where this is going, but we are glad it is going.”

The mayor believes that Humboldt has to get this right. Tyson is coming to Humboldt. He said this will require much planning and much thinking in order to get things right.

In 2018 McDonald’s will see a complete remodel.

A Mother’s Love is now part of the Humboldt Medical Center, addressing the opioid epidemic that the country is facing.

Vanderbilt Life Flight’s temporary headquarters were put in this week.

Jones Family of Companies, which has been here for 82 years and has multiple locations across town, looks great. 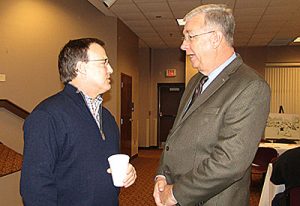 The mayor mentioned industry several times and that Humboldt values their commitment to investing in our community.

The mayor spoke for a moment about the $4.2 million school upgrade, which is complete except for the renovations at the former Jr. high building. The auditorium will have 546 seats and will be available for festivals and plays.

“The school system is on the move, doing a great job,” said Mayor Sikes, adding another “Go Vikings!”

Downtown will continue to see growth in 2018. A new coffee shop is coming, as is a bakery, an Italian restaurant, a children’s boutique and others.

At this point, Mayor Sikes noted, “Everybody gravitates toward a winner so people are gravitating toward Humboldt. It was not long ago the story was different.”

There will be more abandoned homes and buildings torn down in 2018. Eighteen have already caught the attention of Mayor Sikes.

There will also be some hiring at the Humboldt Fire Department. The fire department has a new drone with infrared capabilities. This will be an invaluable tool in searching for lost people.

“It will also be good for searching for the not lost that we want to find,” the Mayor jokingly added. Humboldt Fire Department will be able to share this capability with other communities.

In closing, Mayor Sikes thanked everyone for their attendance and urged action with his trademark, “Help me by planting positive seeds everywhere you go.”