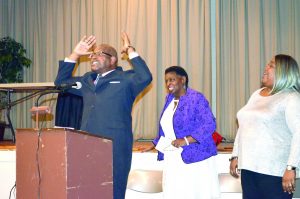 The program was originally scheduled for Jan. 15 but was postponed due to inclement weather.
The “drum major” theme derived from a 1968 sermon given by King in Atlanta, when he reportedly said: “If you want to say that I was a drum major, say that I was a drum major for justice. Say that I was a drum major for peace. I was a drum major for righteousness. And all of the other shallow things will not matter.”
Dr. King constantly fought against social injustice, unfairness and undeserved outcomes, said Rev. Wilburn as he quoted from multiple commentaries about King’s legacy.
“America has still not dealt with issues of racialized and radicalized social control,” said Wilburn. “America continues to be the leading nation regarding people being jailed and incarcerated, especially of minority or oppressed groups. America continues to be the place where minorities are singularly unable to receive due process – a terrible picture of a nation that prides herself as the moral compass of the world.
Wilburn noted that King’s final days before his assassination were spent supporting striking sanitation workers in Memphis who were seeking better pay and work conditions. When King met his fate on April 4, 1968, he was not meeting with the “high and mighty” of society, but with the poor, said Wilburn. “He stood with humble workers as he fought for justice,” Wilburn said.
“When America stops to commemorate Dr. Martin Luther King, Jr. each year, we tend to do a great disservice to the man’s legacy, by glossing over his final act as an anti-poverty crusader,” Wilburn added.
King advocated an end of poverty, racism and militarism, said Wilburn. King envisioned a “beloved city” where people were empathetic to each other’s needs.
King’s dream of racial equality has been continuously deferred by design, Wilburn added. “It’s time for individuals to begin to ask themselves, how might they make King’s dream a reality, as opposed to an ideal that is carried each year without any action,” he said.
“If I am to change my community, it’s not going to be by celebrating, but by pulling up our sleeves and getting our hands dirty,” said Wilburn. “Dr. King is calling us to take up the mantle and work. Our souls should be driven to action.” 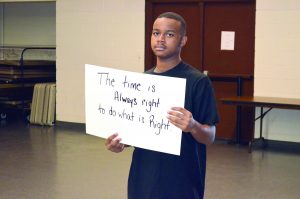 KING QUOTES – Memorable quotes made by Dr. Martin Luther King, Jr. were displayed on posters by youth members of the More Than A Few Good Men group during Sunday’s MLK Community Celebration program. Caleb Smith carried the poster with the quote: “The time is always right to do what is right.”

Youth skits
A highlight of Sunday’s program were dramatic skits performed by young people in the More Than A Few Good Men mentoring group. They highlighted chapters in Martin Luther King’s life, including a health condition crisis. Each young person carried a poster noting events in King’s civil rights advocacy, i.e. the 1960 sit-ins, 1963 Birmingham movement, the “I Have A Dream” speech in August, 1963, and the 1968 Memphis boycott for sanitation workers.
Posters held by youth were also inscribed with memorable King quotes, including:
“Darkness cannot drive out darkness; only light can do that. Hate cannot drive out hate; only love can do that!”
“Let no man pull you low enough to hate them.”
“Faith is taking the first step even when you don’t see the whole staircase.”
“The time is always right to do what is right.”
Leaders of the youth group are Shaun and Shereka Phinnesse. Mr. Phinnesse told the audience the struggle to realize Dr. King’s dream continues. He said people fighting for equality will never give up. “Everything we’ve been through is in our DNA,” he said.
Speakers
Mayor B.W. Beasley spoke after the audience heard a musically scored recording of Dr. King’s “Mountaintop” speech that was given in Memphis before he was killed.
“It’s great to hear the words of Dr. King,” said Beasley. “If you don’t have chill bumps after that you need to leave the room. It’s very powerful.”
The Mayor noted the recent hiring of the first African-American head football coach in Milan, Teddy Pettigrew. “I’m very proud of him,” he said. “When good things happen to good-hearted people, you’re glad about it. It’s a great thing for Milan, Tennessee. I love the man. We have more to celebrate in Milan every year.”
Alderwoman Tammy Wade performed an emotional, a cappella version of the hymn, “Precious Lord.” “It’s time for us to get together in Fourth Ward,” she told the audience. Wade also sang an impromptu song, “Ain’t Gonna Let Nobody Turn Me Around” following Wilburn’s speech. Ms. Wade said there are plans to have a group trip by bus to the Civil Rights Museum in Memphis on April 4, the 50th anniversary of King’s death.
Sunday’s event was sponsored by the Fourth Ward Activity Committee. Lee H. Kelley, president of the committee was one of several speakers. Kelley commended young people who performed the dramatic skits. He urged youth to turn to religious faith. “You can’t do nothing without God,” Kelley said. “When I got God, my life changed.”
Evangelist Lou Hawkins, organizer of the program, also led a congregation singing. Evangelist Norma Jean Burrow served as Mistress of Ceremony.
Tamala Wilburn introduced her husband as the guest speaker, noting that Rev. Wilburn, an Arkansas native, has been preaching for 34 years and received his doctor of ministry from the Memphis Theological Seminary in 1999.
County Commissioner Mark Flake led the singing of “Lift Every Voice.” James “Jake” Clark, vice-president of the committee, gave the invocation and words of thanks and encouragement.
Welcoming remarks and acknowledgments were given by committee members Ruby Walker and Julie Herron. Military veteran Richard Webb led the Pledge of Allegiance. 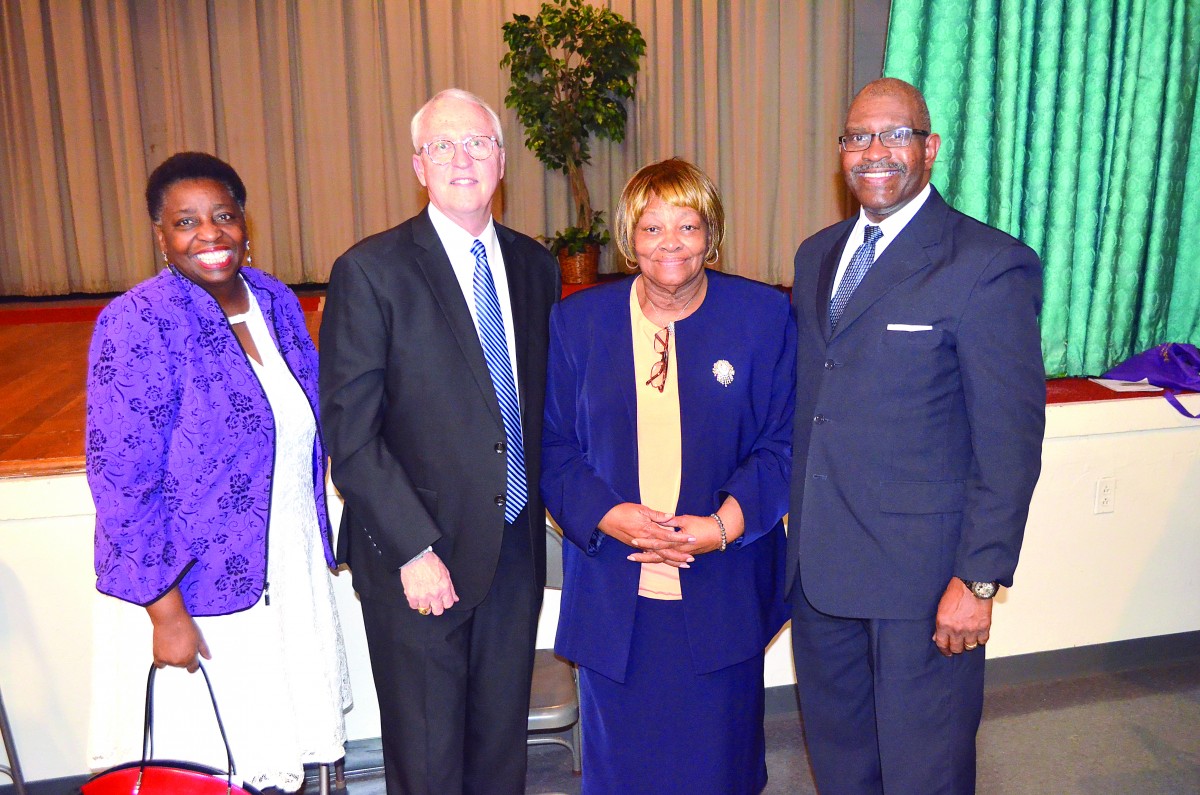