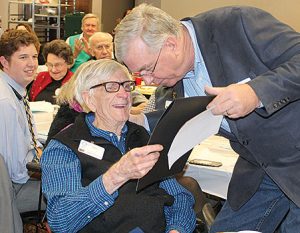 BOYTE HONORED – The Humboldt Rotary Club honored their eldest member last Friday, celebrating the 50th anniversary of Griffin Boyte (left) serving as club president. Club member, Mayor Marvin Sikes, told some history about Boyte’s time in the U.S. Marines before reading a proclamation proclaiming January 19, 2018 as Griffin Boyte Day in Humboldt. Mayor Sikes presents the proclamation to Boyte with a heartfelt pat on the back.

A local civic club honored their longest active member last week. Griffin Boyte has been a member of the Humboldt Rotary Club for over 70 years.

During Friday’s meeting, Boyte was joined by his wife of 65 years, Carol, and their children George Boyte and Kitty McKee along with grandson, Miller McKee. Their other daughter, Bonnie Capsuto, was able to participate in the meeting from Melbourne, Australia using Skype.

The club decided to honor Boyte this year, the 50th anniversary of his term club president. He served as president in 1968-69 and became a Paul Harris fellow in 2000 on his 75th birthday. Paul Harris was one of the founders of Rotary International. Being named a Paul Harris Fellow is one of the highest honors in Rotary.

“Rotary has always been an important part of our family,” Bonnie said while Skyping. “My grandfather, Hubert Boyte, was a member. George was a Junior Rotarian.

Bonnie said her mother, Carol, always fixed her dad’s lunch. When he joined Rotary, she got a day off on Friday, Bonnie said with a laugh.

“I’m proud of you and proud to be your daughter,” Bonnie said of her father.

At 92, Boyte has lived an eventful life. He graduated from Humboldt High School and enrolled at Vanderbilt University in Nashville, Tenn. But Uncle Sam had other plans and drafted him. Boyte became a Corporal in the U.S. Marines where he fought in the South Pacific during WWII.

Humboldt Mayor Marvin Sikes, who is a fellow Rotarian, spoke during Friday’s ceremony. He told of Griffin and his good friend, the late Charles Lee Harris. Both were in the military at the same

Boyte noted that all five arrived the same day too.

“I’ve worked for Griffin Boyte for over 27 years,” Scates said. “He always emphasized confidentiality in the law office.”

Scates told a story of how a man came into the office demanding to see on one of their clients. Scates went to the filing cabinet, pulled the file and set it on top of the cabinet. She knew she could not divulge information on one of their clients. She walked back to her desk and told the man the file is not in the filing cabinet. When he left, Scates went back and put the file back into the cabinet.”

That tale brought laughter from the crowd.

“I appreciate and enjoy his wit,” Scates said of her former employer. And I appreciate his dedication to his clients.”

Other accomplishments include being Humboldt city judge and later Humboldt city attorney from 1973 until 1983. He was president of the Humboldt Jaycees. Boyte was Humboldt Chamber of Commerce president in 1971-72.

He served on the Gibson County Commission for many years and was also a member of the Tennessee Constitutional Convention 1959-1965.

The Boytes are members of First Baptist Church where he served as church clerk and superintendent of Adult Sunday School Department. He is a past president of the Humboldt Golf & Country Club and one of the founders of Bailadores, a men’s social club.

Two other Bailadores’ members, T.O. Lashlee and Dr. Herman Ray Stallings offered stories about the club and about Boyte.

“It started in the 60s with 10 men,” Lashlee recalled. “It was the glory days for Humboldt. Business was good, we were raising new families. But we needed to have some fun so we organized a worthless organization that does nothing except to get together twice a year to have one heck of a good time.”

Stallings spoke of how for 60 years, Boyte sits two rows in front of him in church. Boyte was never seen when he wasn’t in a suit and tie, Stallings said of his friend. He was always polite to the ladies calling them Mrs., followed by their last names.

Up until lately, Boyte rarely missed a Rotary meeting but his health of late has caused his attendance to be sporadic.

Closing out Friday’s meeting, club president, Christine Warrington, announced Boyte will be the club’s first Emeritus member and was presented a certificate noting the honorary status.

The elder Boyte has earned the respect of the club members. That is evident from the joyous handshakes shared with Boyte at every meeting.

Celebrating and honoring Boyte on his 50th anniversary as Rotary president was a day that every club member will not forget. 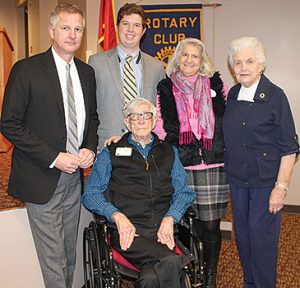 BOYTE FAMILY – Humboldt Rotarian Griffin Boyte (seated) was honored by the club last Friday to celebrate his presidency 50 years ago. Boyte’s family (from left) son George Boyte, grandson Miller McKee, daughter Kitty McKee and Griffin’s wife, Carol, attended the celebration. Boyte’s other daughter, Bonnie Capsuto, was not able to attend in person, but participated in the program while Skyping from Australia.