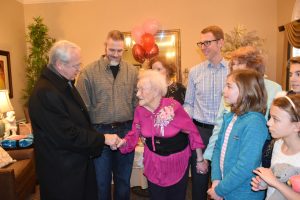 Lucille King looks back on a century in Gibson County
King celebrated 100th birthday on Dec. 30

After 100 years on the goodness of God’s green earth, Lucille King couldn’t have hoped for a better place to spend her life than Gibson County.
King celebrated her 100th birthday on December 30, surrounded by her family and friends, as well as bundles of flowers and balloons in honor of her big day. Well-wishers packed the lobby and dining room of the Dogwood Pointe assisted living facility, which King now calls home, including Mayor B.W. Beasley, who wanted to wish Mrs. King happy birthday personally.
It’s not every day you turn 100. Moments of that magnitude deserve some recognition, but in her younger days, Mrs. Lucy likely would have been content to spend the day at home.
Lucille King was a simple country girl. She didn’t ask much, she didn’t take much, and she was pleased as punch with her happy little life.
Mrs. Lucy was born in the countryside of Northeastern Gibson County, between Mason Hall and Yorkville, on her family’s farm on Dec. 30, 1917.
“One of my first memories was of my daddy’s car,” King said. “Very few people around there had a car at that time. There weren’t any stores in that area,” King said. “We were on the backside of nowhere. I remember when Rutherford got a factory in 1945. It was the first one around. That was when they started making the main roads and all the little towns sprung up.”
“We farmed all our lives,” Mrs. King said, recalling her childhood. “We had cotton, corn, wheat…I did all kinds of hand work. I got to ride the combine, too. When I was growing up, there were a lot of sharecroppers. It was a small farm, and I lived there all my life until I moved out and got married.”
Even when she moved out, King didn’t stray too far from home. Lucille and her husband, Harry, bought some land and built their home two miles from where she grew up.
“We got married at a preacher’s house in Rutherford, and we were married for 76 years,” King said. “We got a place in 1956, and built a house on that spot. We were living in a small house when the girls were born. Dr. Gray delivered them. He was just a country doctor, and he got paid with eggs or fish or whatever people had. He told us that since I had twins he was going to charge me $15.”
When two people keep a marriage alive for that long, one cannot help but ask if there is a secret. Mrs. Lucy’s response boils down to keeping it breezy and having a good sense of humor.
“My husband wasn’t much of a fusser,” Mrs. Lucy smiled. “He’d come in from working in the fields and start to say something, but I would tell him, ‘Harry, you might was well hush, because I know.’ I was nine months older than he was.”
“We got married in the Depression times,” King said. “We didn’t have anything. That was an every day thing. When we got money, we didn’t know what to do with it, so we spent it. I did quiet him down on spending money, though.”
“We would go out visiting for fun more than anything else. We went out to eat every now and then, but we mostly ate at home. One time, we were having dinner with some friends and we were all talking about how good the fish was; how fat it was. Harry looked over and said they were getting fat because they had the fish in a pen. Harry was a jokester.”
Mrs. King chuckled to herself, remembering more of her husband’s quips.
“He went blind, which meant that I had to drive,” Mr. King laughed. “He said the worst thing about it was that he had to be driven around by a woman. After he had his cataracts removed, he looked at me and said, ‘You’ve got more wrinkles than I thought you had.’”
“We had a good time,” Mrs. Lucy said through a wistful smile. “Harry had four brothers and a sister. I was very close with his sister, since we were about the same age and were together a lot. We’d all go to St. Louis a couple of times a year. We went to church at the Church of Christ on Old Kenton Road in Dyer County, then we’d come home.”
It might have been humble at times, but Mrs. Lucy is  thankful and gracious for the life that she’s had, and to be a part of the lives of her kids, grandkids and great grandchildren.
“Gibson County was always very likable country with likable people,” she said. “It’s a great place to have a family.” 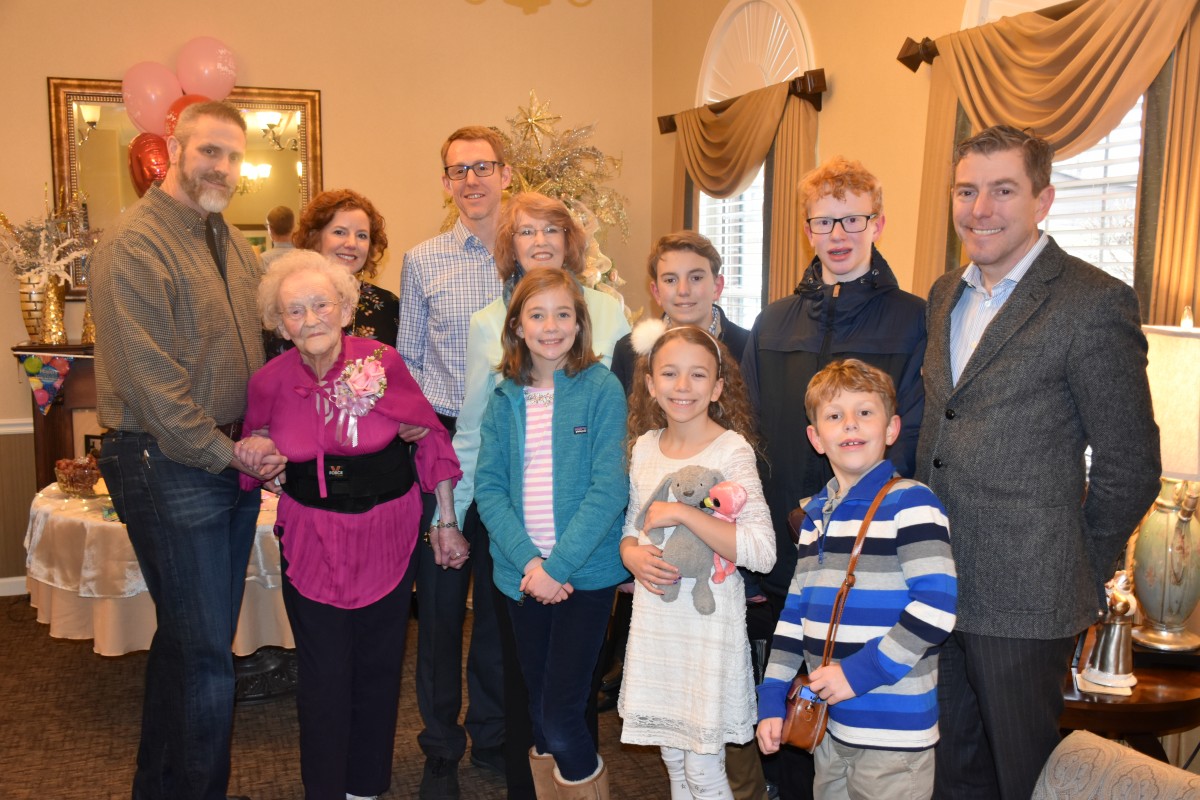 A CENTURY OF LOVING LIFE – Mrs. Lucille King was joined by her family and friends at Dogwood Pointe on December 30 to celebrate her 100th birthday. Mrs. King received a visit from the Mayor and sat down with the Mirror-Exchange to talk about her earliest memories in Gibson County. Pictured with Mrs. King are her family (back row) Erin Lackey, Jon Tate, daughter Mynonne Tate, Hoyt Crowder, Jackson Lackey, Time Crowder, (front row) Ken Tate, Lucille King, Nora Tate, Audrey Crowder and Cooper Lackey. Photo by Logan Watson.