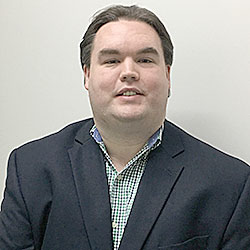 John Blankenship, Humboldt resident and current curator of the West Tennessee Strawberry Festival Museum in Humboldt, was appointed by the Gibson County Commission Monday morning January 8 as the new historian for Gibson County.

Blankenship succeeds the late Fred Culp, who served in the position for many decades.

“He’s a history buff and has shown a great deal of interest in the Historian position,” said Mayor Witherspoon. “I think he would be a great person for the position.”

“I look forward to serving the county,” Blankenship told commissioners.

He said he hopes to revitalize the Gibson County Historical Society. He also is looking toward planning events to commemorate Gibson County’s 200th birthday in the year 2023.

Blankenship, a 2000 graduate of Humboldt High School, is the general manager of two radio stations at Grace Broadcasting, which is based in Crockett County. He said he works three days a week as the curator at the Strawberry Festival Museum at the West Tennessee Regional Art Center building in downtown Humboldt.