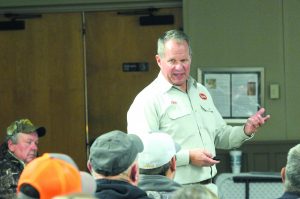 When Tyson Foods announced last month that it would be bringing a new plant to the Gibson County Industrial Park, county and city leaders rejoiced at the prospect of 1,500 new jobs being created. However, the company’s investment in Gibson County does not stop at the creation of a new facility.
After all, those chickens have to come from somewhere.
Representatives from Tyson Foods met with dozens of local farmers last week to discuss the potential of creating partnerships for poultry producers. Roughly 300 people attended a series of informational meetings at the West Tennessee Agricultural Museum recently, outlining Tyson’s production process and providing specifications to landowners that were interested in working with the company.
Tyson Foods is currently seeking farming locations for pullets, breeder hens and broilers within a 50 mile radius of the future facility in Humboldt, and will handle all major aspects of the management process themselves. Feed, vaccinations, transportation and management programs for all poultry types will be provided by Tyson. Tyson will also hire consultants to help producers with the permit process through the Department of Agriculture and the Tennessee Department of Environment and Conservation.
Pay scales vary based on the types of birds that each grower will farm. Pullet farmers are paid by the square foot. Each pullet farm will contain roughly 41,000 pullets and 6,150 roosters. Two 60 x 600 foot houses would yield 72,000 square feet, and pullet farms will generate 2.2 flocks per year on average.
After 21 weeks, pullets would arrive at breeder hen farms. Each farm would contain approximately 39,600 hens and 3,960 roosters in three 42 x 600 foot houses. Egg production begins around 24 weeks, and growers would be paid by the dozen, with hatch bonuses and pullet pay. Normally one flock is placed per year, with four weeks of pre-production, 36-40 weeks of production and 8 weeks of downtime between flocks. Eggs will be collected by the grower.
Producers that choose to build broiler farms will have six houses, with a total square footage of 194,400 feet. Growers will receive 228,600 chicks per farm from the hatchery, and will be paid by the square foot with incentive pay per pound based upon the “relative ranking of standard cost”. Broiler chicks will be reared for approximately 50 days with a minimum of two weeks of downtime, producing 5.5 flocks per year.
One of the chief concerns about the grower farms is the impact each location will have on the surrounding area. Each barn will require seven acres of land, and must be situated at least 500 feet from public wells and residences other than that of the grower. Growers are encouraged to plant buffers such as evergreens or Miscanthus grass if their neighbors are between 500-1,000 feet away. Farms must also be located no less than 1,500 feet from schools, churches and other public areas, as well as incorporated city limits. Further restrictions also require that farms be 100 feet from 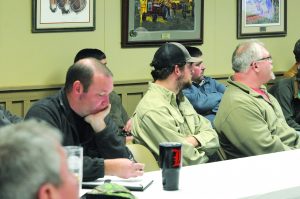 property lines, streams, wetlands, and flood plains, and 150 feet from public roadways.
Tyson representatives also noted that farms must be accessible day and night via all-weather roadways.
Tyson Foods is offering 15-year contracts for farmers capable of sustaining their chosen operations. Producers will be required to furnish the labor, materials and utilities needed to house and produce the poultry. Tyson will retain ownership of all livestock, and producers are prohibited from owning or producing other chickens.
The estimated average net income for pullet farms is just over $75,000 per year. Net income for breeder hen farms is more than $114,000, and broiler farms could produce between $90,000 and $180,000 per year based on the number of houses per farm. Representatives stated, however, that these dollar amounts were not guaranteed and that individual farms would have a number of variables that would change the average yearly income.