MSSD Board to hold Special Meeting regarding coaching position 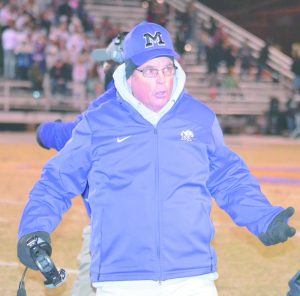 FORMER MHS HEAD COACH JEFF MORRIS stepped down from his role after the Bulldogs’ season ended in mid-November. Morris had led the program for 22 years. His successor will likely be named in the coming weeks.

The Milan Special School District’s Board of Education will be holding a Special Called Meeting this week to approve a new teaching position and coaching supplement at Milan High School for the next Head Coach of the Milan Bulldogs.

The meeting, which will be held this Thursday, December 28, at the MSSD Central Office, was announced late Tuesday night by Certified Board Secretary Lisa Springer. The meeting will begin at 5:30 p.m. inside the large conference room and will be open to the public.

The meeting’s only agenda item is to approve a new teaching position and coaching supplement, pending the new hire’s classroom certification. The board will not discuss the candidates for the position and the floor will not be open for comments from the public.

Interviews for the position began on December 19, with 43 prospective coaches submitting applications. According to MHS Principal and Athletic Director Greg Scott, many of the applicants “have head coach experience or quality assistant coaching experience within successful programs”.

Principal Scott stated that the Board needed to approve the budget amendment before the job could officially be offered, but could not state exactly when the new hire would be made official, stating simply that the new Head Coach would be announced “as soon as we have one.”