Thee Lady Rebels opened the game with Jacey Davis making a lay-up to give McKenzie a 2-0 lead. The Lady Pioneers followed with an 11-0 run with Hannah Ball making a three-pointer and a lay-up. Ashton Lannom and Catherine Watts both hit long three-pointers to give Gibson Co. an 11-2 lead it would never relinquish. With 57 seconds left in the first quarter, Shelby Butler made two free throws to pull McKenzie within four points (13-9).

McKinley Burkett made back-to-back baskets under the goal to give Gibson County a 17-9 lead to end the first quarter.

The Lady Pioneers came out in the second quarter playing aggressive defense and held the Lady Rebels to only one basket.

KJ White, Macey Neal, Jaci White and Alaina Hunt all connected on three-pointers with Watts and Burkett going six for six from the free throw line to take a 41-11 lead at halftime.

The Lady Pioneers began the third quarter with sophomore Kaci Sweatt hitting a three-pointer from the left wing; Ball with a steal and lay-up; Burkett a turnaround jump shot and Hunt hitting a three-pointer from the top of the key to extend their lead to 51-13. White, with a six foot jump-shot, finished the scoring for the Lady Pioneers to give them a 56-22 lead at the end of the third quarter.

The fourth quarter was played under the mercy rule with the entire Lady Pioneers roster seeing playing time. 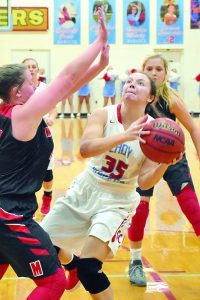