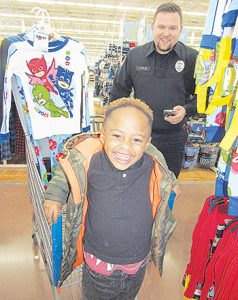 RIDING ON THE BUGGY – Javahier Evertt (front) rides the front of his shopping buggy as he shopped with Patrolman Hodge during the Shop with a Cop event held last Tuesday.

Several Humboldt kids had the opportunity to meet police officers, but not for doing something wrong. Now in its fourth year, the Shop with a Cop program in Humboldt continues to grow.

Each year, the program broadens its reach to the community. Last year the Shop with a Cop event included eight children.

Last Tuesday night, 11 lucky children had the opportunity to enjoy milk, cookies and cupcakes with Humboldt police officers and firemen. However, that is only the beginning of where this fun night would take them.

Once all of the children arrived at the basement of the Humboldt Police Station and photos had been made, they boys and girls were treated to snacks served to them by Humboldt’s finest men in uniform. From there, the children were loaded into police cars and driven with lights flashing and sirens wailing, all the way to our local big box store.

Each child was then assigned either a Humboldt police officer or fireman to assist them as personal shoppers. The children were able to get many of the needs they have such as clothing, including coats, pajamas and school uniforms.

Next, they shopped for the fun stuff which was mostly  toys. Some children made quick work of the decision process while others contemplatively made their selections. 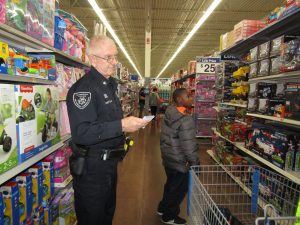 In addition to the 11 children served last Tuesday night, the Humboldt Police Department has enough funds to continue helping children in need from now until Christmas. These funds are raised by the department’s annual shot gun raffle. Once again, they expanded their reach by soliciting donations from local businesses, which were eager to help.

Humboldt police department and fire departments want to let children know policemen and firemen are there to create a safe place. These men and women see first-hand the needs of our city and the impact it has on our children. 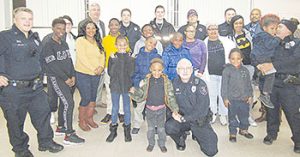 SNACKS BEFORE SHOPPING – The Humboldt Police Department added a fun element to their night of shopping with Humboldt children for Christmas. This year the officers (upper photo) served them milk, cookies and cupcakes for the kids in the basement of the Municipal Building before the shopping began. 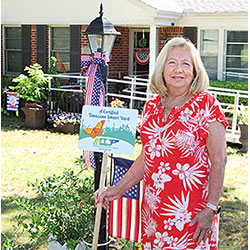 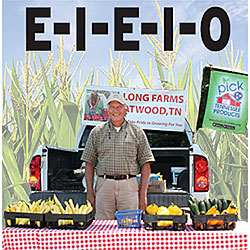