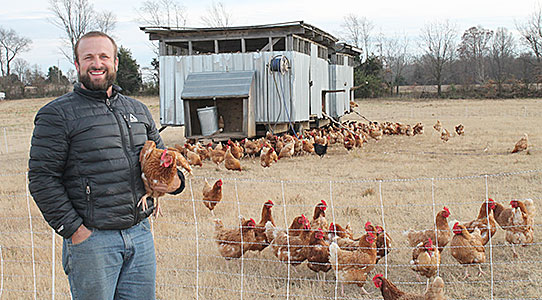 EGG MOBILE – Caleb Curlin, owner of Marilu Farms outside of Fruitland, raises chickens on the farm. He uses what he calls the egg mobile, a movable chicken coop. Curlin said the birds lay eggs, are fed and roost in the egg mobile. It has slatted floors for their droppings to fall through and fertilize the soil, and is moved to a new location every day.

Marmilu Farms near Fruitland is owned and operated by Caleb and Betsy Curlin. They raise cattle, chickens, pigs, sheep and goats. The farm is only 25 acres but the Curlins rent around 200 acres from neighboring farmers.

The name Marmilu was derived from three of their children, Margo, Micha and Lucy. After the farm got started, Josie was born.

Now in their second year on St. Rt. 420, Marmilu Farms is a pasture-based, multi species livestock organization that uses no chemicals in their meat and eggs. They go beyond government guideline.

“The cattle are not grain fed,” Mr. Curlin said. “We move the cattle to a different pasture almost everyday.”

The concept is based on rotating groups of livestock to different areas of pasture using portable electric netting and fences creating paddocks.

It begins with cattle that are herded into a small paddock for grazing. Over time, Curlin has learned how large or small an area the cattle can graze to nearly completely devour the grasses. They leave their droppings, which creates a natural manure fertilizer. He then moves them to the next paddock.

Next he moves 1,000 Highland laying chickens into the recently vacated cattle paddock. Highland is a hybrid chicken bred as a good laying hen. They also raise chickens to eat. 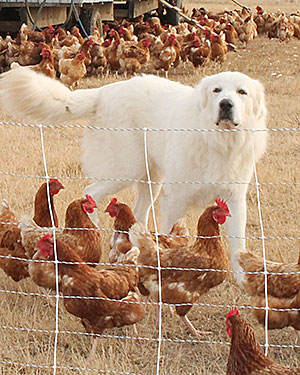 LITTLE BOY – This gorgeous white Pyrenees dog named Little Boy is not quite so little. He is one of the workers on Marmilu Farms and helps keep the livestock inside their designatied locations on the farm.

“They fertilize the land for free,” Curlin said of the process. “It gets layered. The chicks use pasture sanitation and spread the manure around. They eat fly larva and put their own fertilizer down.”

So how does he move 1,000 chickens at a time, one might ask? He uses what he calls the egg mobile. It’s basically a chicken coop on wheels. Curlin used an old cotton trailers, built three coops on then with slat floors so the droppings fall to the ground.

Chickens lay their eggs in the egg-mobile and are fed there. At night they roost inside where Curlin closes the doors. He can then hook up the egg-mobile trailer and move it to another locations. The egg-mobile must be moved often in order to not saturate the ground underneath with chicken droppings that could over-fertilize the soil.

Marmilu Farms has two guardian dogs that help keep the livestock together within their designated paddocks. Little Boy (who is far from little) is a beautiful white Pyrenees breed. Cienna is a Maremma sheep dog, which is an Italian breed.

The cattle bred on the farm are a hybrid called South Poll. These are a medium size cow with shorter legs but stocky bodies.

The farm currently has around 120 head of cattle but he hopes to increase the production to around 500 if he can find the land. The females are used for breeding and the steers are removed from the herd until weaned when they rejoin the herd.

There are 40 hogs currently on the farm, a breed called Duroc. This breed is not a large pig but has a good muscle to fat ratio, Curlin explained. Curlin purchases the piglets from a farm in Selmer and raises them from eight weeks to eight months. They also graze on grass but are also fed a soy-free, non GMO (genetically modified organisms) feed as a supplement. 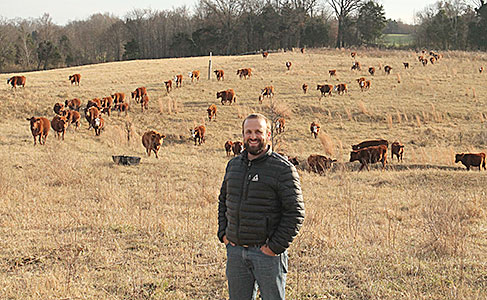 BRINGING IN THE HERD – Marmilu Farms’ owner, Caleb Curlin, brings in his herd of cattle, ready to move them to a new location on the farm. Curlin rotates his livestock to and from designated areas of the pasture (paddocks) where they graze and lay down natural fertilizer for a very organic method of farming.

Marmilu Farms has around 60 female breeding sheep and a goat but will be adding more goats soon.

“The sheep and goat will eat all the stuff the cows don’t like,” Curlin said with a laugh. “Sheep and goats are raised for their meat.”

With hundreds of acres in the farm operation, Curlin strategically moves the livestock from paddock to paddock, mapping out every move. Once the paddock has been used to fullest, it sits for 90 days to replenish with lush grasses. Optimally, Curlin would like to give the grass 100 to 120 days but 90 days is sufficient, he said.

Curlin said with so many people today having allergies and not able to eat certain foods, his farm is producing food that many of those people are able to eat. Everything on the farm is natural, from the grass pasture for grazing, natural fertilizers from animal dropping, to the organic processing of their meats. 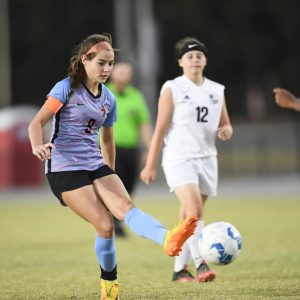