When Jeff Morris announced last month that he would be stepping down as Head Coach of the Bulldogs, it created a vacuum in one of the most highly-regarded football programs in West Tennessee. 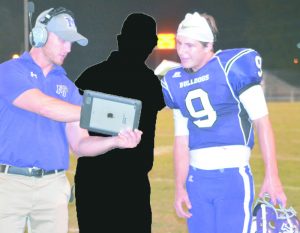 Now, Milan High School Principal and Athletic Director Greg Scott is faced with the monumental task of filling a position that arguably carries more clout in the city than some elected officials.
“Football is part of the fabric of our school,” Scott told the Mirror-Exchange. “All of our sports are important to us, but if you asked someone from outside of our community, someone from Nashville or Atoka, a quality high school football program is something that they associate with us.”
Scott stated that decision is not one that he is taking lightly and that he will be bringing in help from within the Milan Special School District to ensure that the right person is chosen to carry on the legacy that Morris has created with the MHS Bulldogs.
“Jeff has been the longest standing head coach at one school in West Tennessee for two years now,” Scott said. “He can’t be replaced, and I’m not going to try. I can’t look around and say, ‘Where do I find the next Jeff Morris?’, or, ‘Where do I find the next John Wade Tucker?’ I have to find the best fit that benefits our students and our community.”
In order to find that candidate, Scott has assembled an advisory committee of former coaches and players to assist him in the vetting and interview process. Along with Scott, who has 12 years experience in the role of Athletic Director, the committee will consist of Director of Schools Jonathan Criswell, a former standout quarterback for Trenton Peabody and Murray State University, the Milan Police Department’s Sergeant Nick Glenn, a Division I coach with the UTM Skyhawks, Bulldogs Head Baseball Coach Todd Holden, who spent close to 20 years as a member of the Bulldogs football coaching staff, and the MSSD’s Transportation, Safety and Attendance Director Kevin Ellison, who also possesses high school coaching experience.
“The committee serves only to provide feedback and insight from their particular areas of expertise,” Principal Scott noted. “They will not be ranking or voting on any of the applicants.”
“We’re looking for someone with the character, integrity and experience to lead our program,” Scott said. “Our student-athletes in any sport reflect the values of their coaches. Our band and our sports teams represent us to everyone outside our city. We are looking for someone who push our players to play harder, work harder, and do so with high morals, ethics and integrity. Raw talent comes and goes, but if you have players who consistently work hard and play with character, those are the teams that are successful over time.”
It’s been roughly three weeks since Coach Morris announced his resignation, and according to Principal Scott, the applications for the position began rolling in almost immediately. Last Wednesday, Director Criswell estimated that the MSSD had received more than 20 applications for the job, which has no doubt grown in the intervening week.
“We have plenty to choose from,” Scott said. “I don’t go two days without an application or a resume coming across my desk. The backgrounds of the applicants have been very encouraging.”
Scott stated that he and the advisory committee are currently in the process of sorting through the applications and determining which candidates will be brought in for interviews. Scott said that he has not set a concrete hiring date, but plans on making the hire within a reasonable time frame for the next coach to get acclimated to the program.
“We definitely want to give them enough time to get here in time for spring conditioning and workouts so we can maintain the fidelity of the process,” said Principal Scott. “Coach Morris’ contract does not expire until June, and he has stated that he is willing to help in whatever capacity the next coach requires.”
“Coach Morris has won a lot of games here and he did it the right way,” added Sgt. Glenn, who also serves as the School Resource Officer at Milan High School. “He led with integrity and class, and that is something that we want the next coach to uphold. Bulldog football has a rich tradition, and we want that person to pick up that tradition and grow it to become even better.”