FacebookEmail
| logout
Milan’s oldest church plans new building near S. First and Meadowbrook
By Steve Short
Milan’s oldest church is planning to move to a new location on S. First Street, following approval with stipulations by the Planning Commission Nov. 13.
Members of New Hope Primitive Baptist Church, located on West Main St., presented plans for a new 4,800 sq. ft. building that would be located on a 2.3 acre on the east side of S. First near Meadowbrook Dr. and the Meadowbrook subdivision.
The lot is zoned R1 Residential, which is primarily for single family residences. R1 allows use by a church, library or school on appeal, if approved by the Planning Commission. 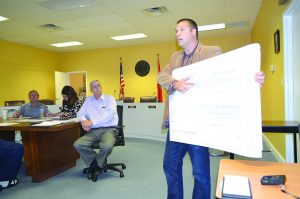 “People are worried (the lot) is going to be rezoned,” said Chairman Ronnie Black. “It’s not. It will still be R1.” He said he understood residents’ concerns about rainfall drainage and adding to traffic in the area.

Commission member Morris Chandler drafted the motion to approve the S. First property as the new location for New Hope. Approval could apply to another church in the future. The lot was approved for use by a church subject to restrictions: (1) Drainage issues would be addressed by a competent engineering firm, and specifications would be approved by Milan Public Works; (2) A green space no less than 10 ft. wide would be provided in the rear of the lot with foliage no less than 7 ft. high; (3) An access drive along Meadowbrook would be approved by the Milan Planning Dept. and Milan Public Works prior to construction being done, (4) Setbacks on the property would be a minimum of 40 ft. and include the green space buffer.
Voting to approve the church use were Mr. Chandler, Joe Woodson, Ronnie Black, and Jimmy Burgess.
Church will ‘fit in’
Josh Arnold, member of the New Hope church, outlined plans Monday for the new building for the Planning Commission and concerned residents.
Arnold’s father, Lynn Arnold was the real estate agent marketing the property. They both told residents attending the meeting and members of the Planning Commission that the church will fit in to the area.
“We want to try to make it so it acclimates well with the neighborhood,” said Josh Arnold. “We’ll consider options to make it reasonable for neighbors. We’ll take suggestions and try to make something that works.”
Real estate developer Lynn Arnold said he had turned down two convenience stores and one restaurant that “offered a lot of money” for the property. Arnold said there was too much traffic congestion in the area to accommodate a commercial business.
“When this (church) deal came along, I thought that would be something the neighbors could see as positive,” said Arnold. He said the building would be small, and the parking area would allow for about 40 vehicles. The church meets Sunday mornings and nights and Wednesday nights.
“This is a small church,” said Arnold. “It will look so good as you’re coming into town. This will be a good thing for Milan. A change to a commercial zone ain’t going to happen. It will not be rezoned. I felt like this was the perfect place for the church to locate for lots of reasons. It will fit the community. It will not increase traffic per say. This will be the most non-intrusive thing that could go on that lot. This is the best thing that could ever go there, that will look good and still not do harm to the neighborhood.”
Residents concerned 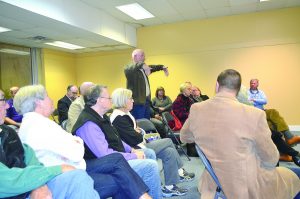 Residents in the neighborhood of the proposed site for the New Hope Primitive Baptist Church voiced concerns about the new building and how it will affect traffic in the area. Photo by Steve Short.

A large crowd attended the Planning Commission meeting at City Hall. Several residents expressed concerns about a church building adding to “nightmarish” traffic congestion, flooding problems, impact on residential property, and the possibility that the property or part of the lot might be rezoned in the future for commercial purposes.
The church lot is adjacent to the Meadowbrook subdivision. The Cumberland Presbyterian Church is across S. First.
Fred Collins, former Milan City Attorney resides on S. First about a block from the new church location. He spoke Monday, saying he has opposed proposals for many years to rezone the S. First-Meadowbrook lot for commercial use. Collins had spoken to Lynn and Josh Arnold about the church’s proposal. He was concerned part of the lot could be sold for commercial use. Rezoning of the property would have to be approved by the Planning Commission and City Board.
“I would not oppose this,” Mr. Collins told the Planning Commission. “I don’t have specific objection to it, based on assurances from Lynn and Josh. I told them I wouldn’t oppose it.”
After the vote, area residents and church members seemed pleased with restrictions on the property and plans for the church.
“I think they will be very good neighbors and we will be too,” said Jim Szopinski.
“It will be good for the city of Milan,” said pastor Elder Mike Roberts. He has led the church for seven years.
“We’re thrilled,” said church Deacon James Glidwell after the vote.
The church hopes to break ground for the building in the spring. Jerry Belew is the tentative contractor for the project.
Historic church
The New Hope Primitive Baptist congregation can claim to be Milan’s oldest church, predating the founding of Milan. Methodists built Milan’s first church building in 1868. New Hope Primitive Baptist Church was organized decades earlier in 1825 in a village known as Shady Grove between present day Atwood and Milan, currently the Milan arsenal. The church was located on the south fork of the Obion River. An old cemetery still can be found near this spot where many pioneer settlers of this area are buried. After the Civil War, the church was moved to the Whitthorne community on Hwy 104 a few miles east of Milan.
The church remained in the Whitthorne community until 1941, when the U.S. government purchased all the land in that area to build the Milan Arsenal. Being forced to sell their church house and acreage, the church purchased a lot and built a new church house on West Main Street in Milan, where the church is presently located.
The church has about one hundred members with forty to fifty people attending services regularly.
New Hope Baptist Church on Hwy 79 east of Milan near the West TN Ag Museum, with a predominantly African-American congregation, came out of New Hope Primitive Baptist Church at Shady Grove. First Baptist Church of Milan also came out of New Hope Primitive Baptist Church after an ideological split over “missions.” 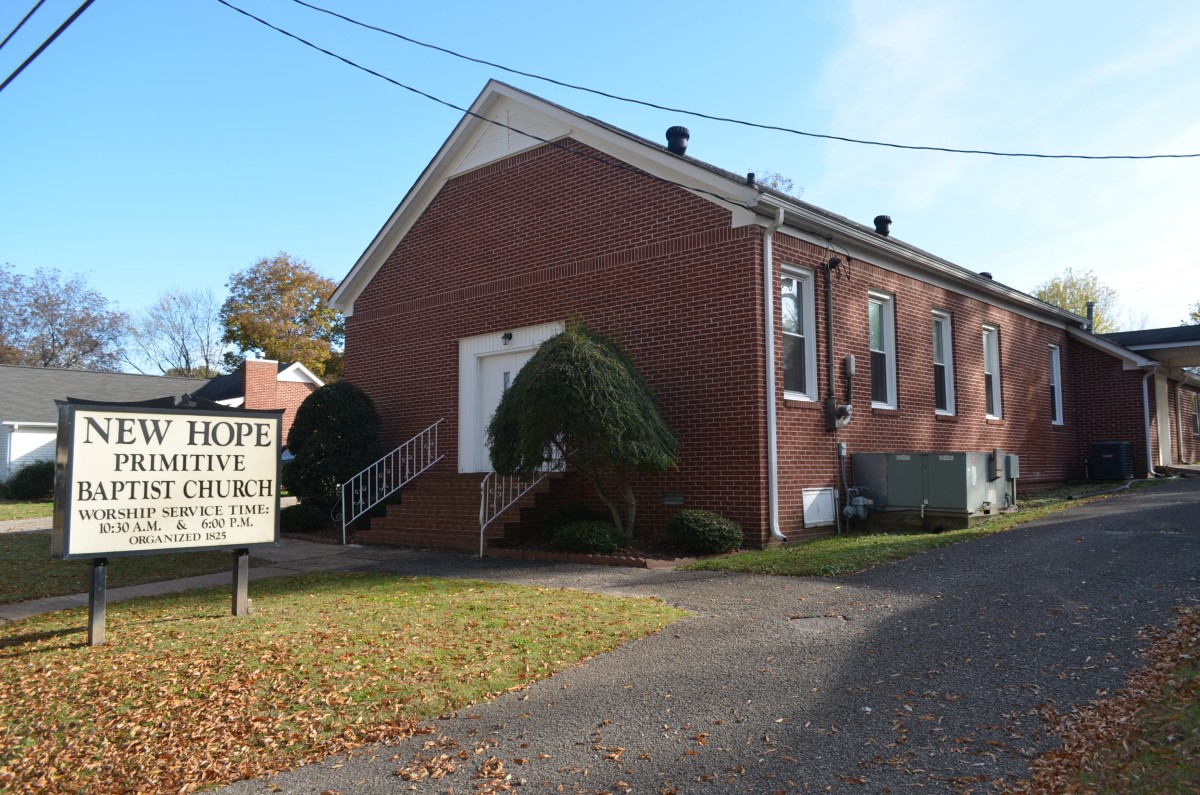