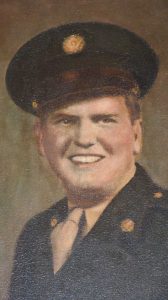 The Distinguished Flying Cross is awarded to a soldier who distinguishes himself or herself in support of operations by “heroism or extraordinary achievement while participating in an aerial flight.”
At least two men from Milan have earned the award. And George Fain was close to both of them – his lifelong friend, J. Ralph Jones, and Fain’s own son, Dan.
Mr. Fain, 90, paid tribute to the late Mr. Jones last week when he presented a painting of the Memphis Belle B17 bomber to Jones’ family members: widow, Gladys Creswell Jones; son, Johnny and daughter, Kathy Jones Carroll.
Jones, who passed away in 2003, earned his Distinguished Flying Cross during World War II in 1944 after flying 25 bombing missions over Germany in a B17 flying fortress like the “Belle,” the legendary plane that was in Jones’ 8th Air Corps Bomb Group.
“That was some of the fiercest combat we’ve ever had,” said Mr. Fain about bombing raids launched from England against shipyards, harbors, railway yards, aerodromes, oil refineries, aircraft factories, and other industrial targets in Germany, France, the Netherlands, Belgium, Norway, Poland, Hungary and Czechoslovakia.
“We lost more aviators than we did infantrymen,” said Fain. “In just one day, they lost sixty flying fortresses and six hundred air crewmen. If they had failed, I don’t know when that war would have been over.”
Jones, a 91st Bomb Group Army Air Corps Staff Sergeant, was a waist gunner on a B17 bomber. Crews had to fight off attacks from German ground artillery and fighter planes.
“Daddy said the flak was so heavy it looked like a thunderstorm,” recalled Johnny Jones.
“Ralph said the B17 bomber won the war,” added Gloria Jones. 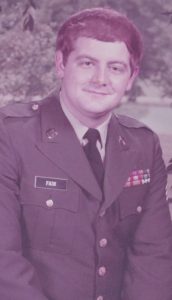 “Ralph was one of the few who flew on those highly dangerous missions; only one third of the men would make twenty-five missions,” said Fain, a Marine “ground pounder” in the Pacific in WWII, and Army officer. After the war Fain and Jones became lifelong friends.
Jones was issued the Distinguished Flying Cross on Feb. 25, 1944 for “extraordinary achievement,” according to his medal citation signed by Maj. Gen. Jimmy Doolittle. Jones’ Distinguished Flying Cross citation read:
“To John R. Jones, Staff Sergeant, 338th Bombardment Squadron, Army Air Forces, U.S. Army: For extraordinary achievement while serving as Right Waist Gunner on twenty-five heavy bombardment missions over enemy occupied Continental Europe. Displaying great courage and skill, Sgt. Jones, fighting from his gun position, has warded off many enemy attacks and has materially aided in the success of each of the twenty-five missions. The courage, coolness and skill displayed by Sgt. Jones on all these occasions reflect the highest credit upon himself and the Armed Forces of the United States. Home address: Milan, Tenn.”
Jones also received four air medals, the Bronze Star, the American Campaign medal, the European-African medal, Middle Eastern Campaign medal and WWII Victory Medal.
During one bombing raid, members of Jones’ crew were unconscious because of lack of oxygen. Jones dragged his tail gunner to an oxygen source. The soldier later credited Jones with saving his life.
“The reason they got back from the war, was just because it wasn’t their time,” said Gloria Jones.
Back in Milan, Ralph Jones became a civic leader and director of Bodkin Funeral Home.
“I admired Ralph’s military duty and civilian duty; he was an outstanding civic leader,” said Fain. “We went to church together. He was active in the Presbyterian church as a deacon and elder, and he was a member of the Lions Club.”
Fain first became close to the Jones’ family in the early 1940s when he moved from Ducktown, TN to Milan and lived with Ralph Jones’ parents (Sam and Jenny) and half-brother, Dwayne before Fain joined the Marine Corps.
Jones’ Distinguished Flying Cross medal took on added meaning for George Fain after his son, Dan also won the combat medal for heroic actions in the Vietnam War. Dan purchased the painting of the Memphis Belle, and the presentation to the Jones family was from George and Dan Fain, who retired after 25 years as a Memphis policeman and resides in Sebring, Florida.
“Dan experienced a similar situation as Ralph, even though the wars they were in were more than twenty years apart,” said George Fain. “Both of them were door gunners on aircraft, Ralph on a B17 bomber and Dan on a helicopter.”
Dan Fain, an Army SP4, won the Distinguished Flying Cross for heroic actions on Feb. 28, 1971, just eighteen days after arriving in Vietnam. According to his account given to the Milan Mirror newspaper, Fain was flying over Laos when enemy gunners killed a fellow soldier. According to Fain’s citation, Fain’s chopper encountered mortar fire flying above a landing zone.
“His aircraft spotted the mortar tube and was hit numerous times while destroying the position,” read Fain’s DFC citation. “Leaving the area, the lead aircraft was shot down. He then laid down suppressive fire to cover the downed crew until they were rescued.” Fain’s crew was credited with killing 34 Viet Cong soldiers that day.
“(Dan) went into a hot zone that was in the enemy’s hands,” said George Fain. “When his sister aircraft went down they went in and picked those guys up. They got out of there under so much fire they deemed it was heroic to go in and get the other crew. They picked them up without getting shot down themselves.”
Fain and his crew of four flew many combat missions and were shot down twice over enemy territory. In addition to the Distinguished Flying Cross, Dan Fain received 12 air medals, the Bronze Star, and Vietnamese Cross of Gallantry.
“I don’t know of any others in Milan who won the Distinguished Flying Cross,” said George Fain. “I hope there are others and hope that they would let people know. That medal is definitely to recognize valor and gallantry in combat.”
“I wish young people would remember what these soldiers sacrificed during wars,” said Kathy Jones Carroll. “People need to realize that these men fought for our freedom.” 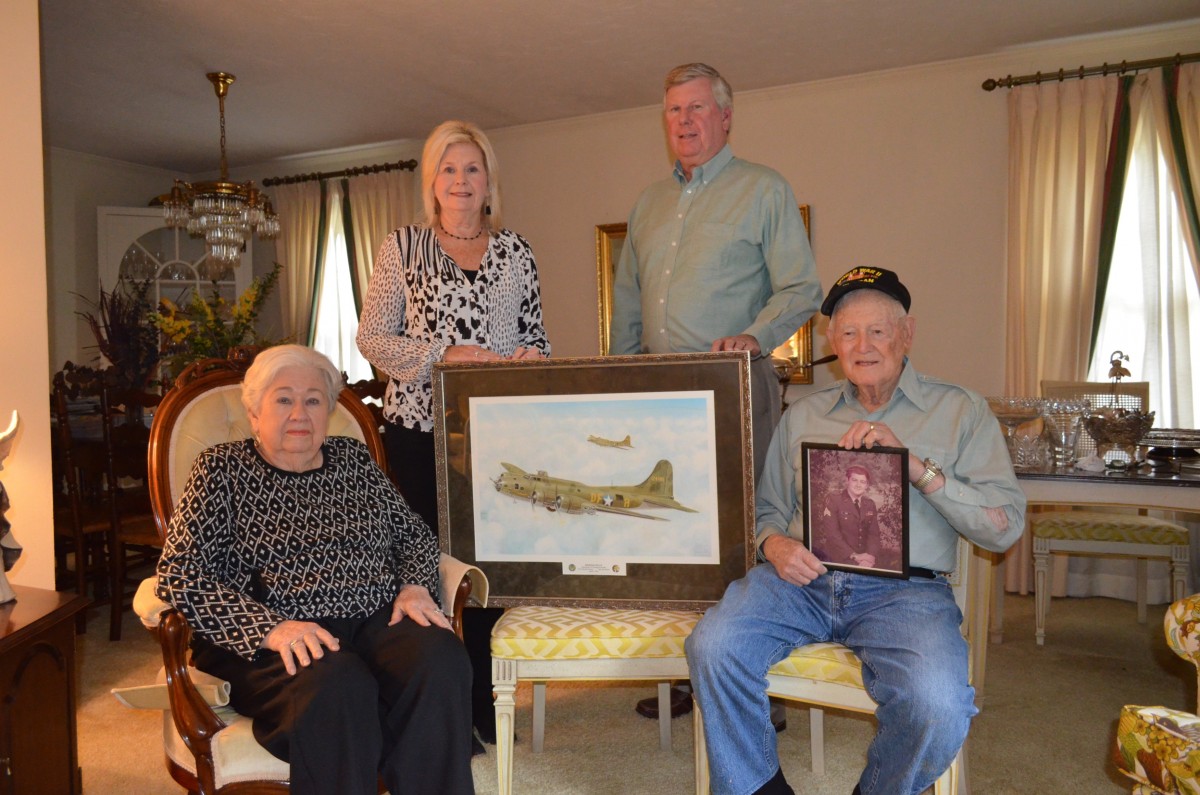 FAMILY OF MEDAL WINNER HONORED – The family of the late Ralph Jones was recently presented a painting of the Memphis Belle B17 bomber as a tribute to Jones’ heroism during WWII. Mr. Jones received the Distinguished Flying Cross, Bronze Star and eight other military medals for his heroic actions as a gunner on a B17. The painting was presented by George Fain (seated, right), retired LTC, AUS, (Army of the U.S.) Brigadier General State of Tenn., and Fain’s son, Dan Fain (in picture), who was awarded the Distinguished Flying Cross while serving as a gunner on a Huey Helicopter gunship during the Vietnam War in 1971. Pictured are (from left) widow Gloria Jones and (back) children Kathy Jones Carroll and Johnny Jones.