The Gibson County Marching Pioneers captured the Tennessee Division I State Championship this past Saturday at Riverdale High School in Murfreesboro.

he band has now won six state championships and this is the first year they swept every first place trophy in both preliminary and finals competition.

Along with all of these great awards, several seniors received scholarships to further their education.  Libby Thetford, Hannah Patterson, Mackenzie Eddlemon, Madeline Powell, Kaley Taylor and Taylor Guinn received a combined total of $167,500 from schools including Austin Peay State University, Carson Newman College, University of Tennessee at Martin, Union University, Bethel University and David Lipscomb University.  Libby Thetford also received the Division I Corporate Scholarship to use at a school of her choice.

The GC Marching Pioneers Band was escorted back to Gibson County High School by Gibson County Sheriff Department Sunday afternoon around 5 p.m. Family, friends, students and faculty members outside of the school greeted them. GC teachers Sally Baird and Tammy Lovell with help from GCHS cheerleaders Madison Baird, Courtney Cole, and Sierra Lee line the driveway to the school with balloons and also decorated the gym for a small celebration for the State Champs. During the celebration GCHS Principle Jim Hughes said, “What made the band so successful was they had great directors, great set of parents and great group of band members. “ He added he was so proud of them but also was envied of their talent. Next band captain Henry Todd thanked all the directors for never given up on them, even when they didn’t want to be out there. He also thanked all the parents for their support and added without them this wouldn’t be possibly. Band captain Caitlyn Watts told the band members I know at time we pushed hard but you pushed back and that is one of the reason we are State Champs.

The 2017 Gibson County Marching Pioneer State Championship production was titled “In Pursuit Of…” The show begins with Aaron Copland’s “The Promise of Living”, than the show transitions into a spirited playing of Copland’s “Simple Gifts”. Next was “A Time for Us” from the timeless classic “Romeo and Juliet” than the percussion section performing Meatloaf’s “I Would Do Anything for Love”. The band performs Puccinni’s “Nessun Dorma” (translated “None Shall Sleep”) and closed the show with Bernstein’s “Ode to Joy”. Solos and duets for the show feature Libby Thetford and Jarrett Stephenson and Kayley Taylor performs a dance solo. Gibson County Marching Pioneers Band was led by GCHS Band Director Jeremy Tate and assistants by Tico Parson, DeDe Johnson, Sharon Lee, Trevor Mayhall, Kari Howard. Bill Laarz, Frankie Congiardo  , Samantha Dobson and Joseph Agee.

The directors, band boosters, students and families of the GCHS Marching Pioneers want to give special thanks to Mr. Eddie Pruett, the GCSSD Board, Jim Hughes, Chris Lownsdale, Amanda Cary, sponsors, community members, fans, family, bus drivers and anyone who had a part in helping and supporting them during this year championship marching season.

Jeremy Tate, GCHS Marching Pioneers Director said, “I’m extremely proud of what these band members have accomplished. This is the best playing band, but during our season we kept coming in second place in competitions. But they continue to come back each week and work very hard.” 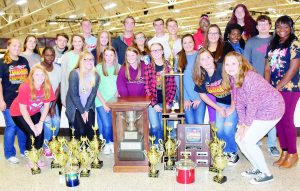