“Why is rural West Tennessee left out of everything?”

Mayor Chris Young asked at last week’s Dyer city board meeting. “You have $121 million going to a museum in Nashville that the taxpayers must pay for and you start leaving small towns and small areas out of everything. There’s a problem somewhere. The whole distance of the county, north to south has to be built together.”

Street repairs prompted the discussion. Younger said $40,000 would only get a quarter of a mile.

Younger said, “Where can we cut to come up with the money for repairs? We are not spending frivolously.”

Younger continued, “Our problem right now is that south Gibson County is being built up and for the simple reason that it’s close to Jackson.”

Alderman Ray Carroll added, “If we were able to get factories in Dyer, we wouldn’t have the workforce to get the job done.”

Younger said it’s going to take him and City Recorder Nathan Reed and the Rutherford city board to make a stand. Working singularly is no longer the answer.

“It’s time to stand up and say we need some help,” he said.

City Attorney Bill Barron said, “It’s obvious when you cross the river, it’s a whole different world. All the jobs go through Nashville and they aren’t going to send them down here. FedEx went to Memphis because half the population of the country is within a 500-mile radius of Memphis. It only seems natural that they would want to come into West Tennessee but they don’t. Weakley and Obion counties have good roads. If Brownsville gets that big car manufacturing plant, it would help the whole surrounding area.”

Younger said, “The problem is maybe we’re not screaming loud enough. It really bothers me. I stay up all night long thinking about this stuff.”

PRI, a Milan company that is here to repair the potholes in the city, has arrived. Mayor Chris Younger mentioned there are two locations at Rocky Point and one on West College Street, and there will be one more. The board approved the additional $5,943.

City Recorder Nathan Reed said it works out to about $11/square foot. Alderman Michael Barron asked how many areas PRI is doing to which Mayor Younger said 35 locations plus these.

Younger said, “These 35 are of the worst in town. We know we will not be able to get them all done because of money constraints.”

Fire Chief Ryan Shanklin addressed the board detailing a first responder course that eight people are interested in taking. The cost is $300 per person. He doesn’t know if all eight would be able to pay for the course themselves. Some of the first responders have stopped going whenever a call goes out. He said it is a difficult course and it begins January 8 The total cost would be $2,400 for the eight. The training would get them their first responder’s license. Shanklin said there are only three first responders answering calls right now.

Younger said the problem too is availability of ambulances. They called for an ambulance recently, and it took an hour and a half for it to arrive from Jackson. Younger said that if the chief is on his fulltime job, the city only has two responders.

Younger said, “I think our citizens really depend on the first responders so the more we have, the better off we are.”

Alderman Ray Carroll asked what happens if a person takes the course but doesn’t pass the test. Shanklin said they have three tries to pass it. Then they would have to take a refresher class to get three more tries.

Reed said, “Several years ago, we had a lady at church that collapsed. Seeing [Gibson County Fire Chief] Bryan Cathey come up the stairs on the first responder call was a great relief.”

The board approved the cost for the course.

Shanklin said the fire department needs new L.E.D. Flashlights. The cost of 25 flashlights is $2,800. A grant will pay $1,250. The city would pay the remainder. Everyone on the department will get a flashlight. The board approved the purchase.

Shanklin asked for new software and paperwork for the department. He said right now they could not do an inventory. The price is over what was budgeted so Shanklin will try to get a better price.

Trunk or Treat is coming up Tuesday, Oct. 31. Volunteers should arrive at 4 p.m. The event will begin at 6 and end at 8. They need coolers. There will be no makeup date.

Younger announced that the city needs to buy some hand tools to equip the trucks for the street department. Water Department Supervisor Randy Gregory is compiling a list of the tools needed. The total cost is not yet worked out but shouldn’t exceed $2,000.

Younger said tools on the trucks would be color-coded. Employees will be responsible for their car. Alderman Ray Carroll suggested to Gregory they etch “City of Dyer” into each tool. Motion was made by Ivie to approve up to $2,500 for tools; motion passed.

The city street crew was supposed to clean out the storm drains the last two months, but it seems not to have been done. Street Supervisor Willie Caton said from here on, paperwork would be done daily and storm drains and locations would be annotated. 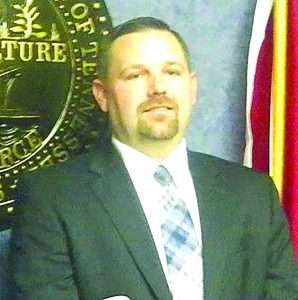