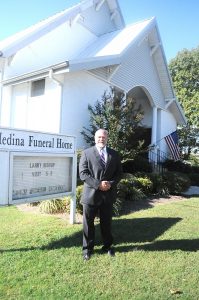 MURPHY EYES RETIREMENT – Steve Murphy, owner of Medina Funeral Home and Cremation Services, will be stepping into a managing partner role after selling the business he created in 2008. Murphy will transfer ownership to Chris Mayberry over the next ten years so he can spend time traveling and being a grandfather. Photo by Logan Watson.

After years of service, Murphy looks toward retirement

For close to 30 years, Steve Murphy has stood beside his friends and neighbors through the worst days of their lives, but the time has come for him to focus on beginnings rather than endings.
Murphy began his career on September 27, 1989, when he moved to Nashville to follow his dream of becoming a mortician and bringing some light into the darkness.
“It was a big change, a country boy moving to Nashville,” Murphy recalled. “I lived in a three bedroom upstairs apartment over a funeral home on Weston Avenue. It was the safest place in town. No one wanted to be there.”
Being a mortician is not a glamorous profession, but a necessary one, and one that Murphy has felt called to do since his older brother, Jeff, did a book report on it in high school.
“I was fascinated by it from that point on,” Murphy said. “Honestly, I spent the first five years trying to figure out how to get out. It took the next five years for me to figure out my purpose.”
“I was looking for the type of ministry where I could help people, rather than be locked into a nine-to-five job,” Murphy said, and being a funeral director offered him just that. “I meet people at one of the most difficult times in their lives, and it’s my job to make that time as easy as possible. As people, it’s a process that we go through, on average, twice in our lives. I do it every day, so I’m there to take care of the little details and prepare them for the days and weeks to follow.”
“About seventy percent of what I do is counseling,” Murphy said. “It’s a business, but it’s not a business. I’m there to help people.”
Murphy opened Medina Funeral Home and Cremation Services after returning home to Gibson County in 2008 to focus on serving the community, but now his goals are changing.
“My daughter Hannah is expecting her first child in March,” Murphy said. “I know my role, and that is to pick that child up, spoil her rotten and take her home. I turn fifty next year, and I plan on traveling and seeing my grandchild. That’s what’s most important.”
“I built this from the ground up,” Murphy said. “That’s not an easy thing to do in the funeral business, but thanks to the community, we’ve found success by really embracing cremation and providing services that others do not.”
Murphy stated that roughly 2/3 of his business now involves cremation services, and Medina Funeral Home and Cremation Services is on pace to do 180 services this year, only 60 of which will be casket burials.
“The culture has changed,” Murphy said. “Everything is instant. Traditional funerals are a 3-5 day process, but cremations can take as little as 24 hours.” In addition to the convenience and lower cost of cremations, Murphy also feels that the expediency of the process better helps the bereaved process their grief.
“It speeds up the grieving process,” Murphy said. “It’s easier for them to move through than the traditional burial process and provides them with more options. People can bury or scatter their loved one’s ashes in a special place, or keep them so that they don’t have the disconnect of burial.”
While he will be stepping into the role of Managing Partner, Murphy wished to ensure families will still be in good hands with new owner Chris Mayberry.
“It wasn’t an easy decision to make,” Murphy said. “The people I work with have become like family and we want to take care of the families we serve. None of that has changed. Murphy reached an agreement last month with Mayberry that will transfer ownership of the funeral homes over the course of the next 10 years. “Chris made the decision a lot easier. Chris and I have been friends for over 30 years. We started mortuary college together in 1987. I knew Chris would do what he says and take care of our employees and families.” 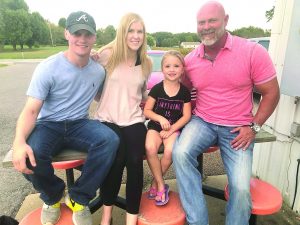 FAMILY FIRST – Murphy stated that his decision to retire was influenced in part by the upcoming birth of his daughter Hannah’s first child, Maylee Jade Long, in March. “Poppa Steve” said that he plans on spending as much time with his family as he can, as well as traveling and “living life”. Pictured are (from left) Jon Long, Hannah Long, Anny and Steve Murphy.

While Murphy may be looking forward to taking some well-deserved time off, he made it known that he has not hung up his suit just yet.
“I want to let people know that I’m not gone,” Murphy said. “I’m available any time and all of our pre-arranged funerals will be honored as written. I’ll make sure everyone is taken care of.”
Mayberry also owns funeral homes in Camden, Covington, Dyersburg, McKenzie and Parsons.
Murphy also wished to thank some of the people in his life that helped him reach this point in his career.
“I want to thank Mack Woods and Johnny and Ralph Jones. They’re the first ones to give me some experience in the business. Charles Johnson and the late Charles King had faith in me when I was starting out. Most of all, I want to thank my brother, Kevin. He told me early on that I was a really good funeral director and embalmer, and without him I never would have had the confidence to start my own business.”
“What you do comes back to you tenfold,” Murphy said, “and I want to thank the community for giving me the chance to serve them. My dad always said, ‘It doesn’t matter where you end up in life, or what you have. It’s the people you can positively impact along the way that counts.’ That’s what I’ve tried to do.”