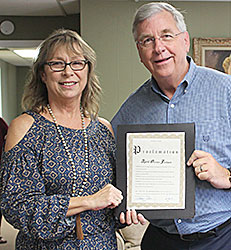 PROCLAMATION – During a reception last Thursday for April Jackson, retiring publisher/editor of the Humboldt Chronicle, Humboldt Mayor Marvin Sikes read a proclamation stating October 19 as April Garner Jackson Day in Humboldt. Dozens of Jackson’s friends and family attended the reception in her honor. Jackson has worked in the newspaper industry since her high school days at Peabody. During her career, at one time or another, Jackson worked at every newspaper in Gibson County. 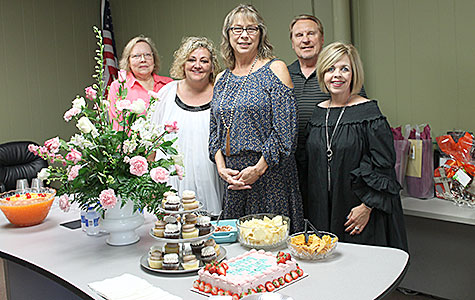 COWORKERS – The staff of the Humboldt Chronicle hosted a retirement reception for publisher/editor April Jackson. Jackson’s last day on the job was last Thursday. It was a bittersweet day for the staff who will miss Jackson but wish the very best in her well-deserved retirement. Staffers are (from left) Cindy Mitchell, Kim Forbes, (Jackson), Danny Wade and Lee Ann Butler. (Not pictured are Barry DeLoach and Lenford Carr)