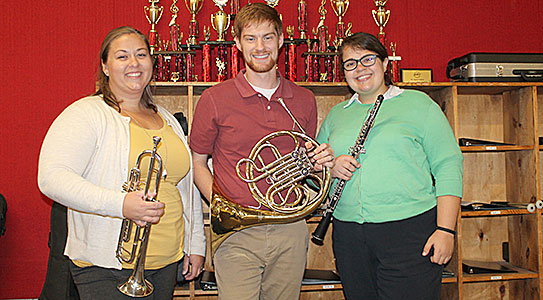 BANDING TOGETHER – Former Humboldt band student, Heather Glenn-Hoekstra (left) is now the new band director at Humboldt Jr./Sr. High School. She is thrilled to have the opportunity to come back to her alma mater to oversee the band department. Her husband, John Glenn-Hoestra (center) has also been hired as an assistant. Assistant band director, Delaney Naffziger, welcomes the couple and the three will work as a team to build the program.

A former Humboldt High School band student has moved back to town, not as a student, but as band director.

Heather Glenn-Hoekstra is the new director and her husband, John Glenn-Hoekstra, is the new band assistant at Humboldt Jr./Sr. High School. Current assistant director, Delaney Naffziger, is still on staff as well. All three will work as a team.

Heather graduated from Humboldt High School in 2008 and attended Austin Peay State University, graduating in 2013. She is elated to be back in her hometown, doing what she loves, teaching and playing music.

When former band director, Matthew Sanders departed, the band program had a void. Naffziger filled in admirably but being in charge of both high school and junior high programs is a huge undertaking.

Glenn-Hoekstra’s first day on the job was Monday, September 25, during homecoming week.

“I hit the ground running,” Glenn-Hoekstra said. “The Saturday before, I actually began teaching an entirely new halftime field show. Tuesday and Thursday we worked on the show from 5 to 7 p.m. each night and performed at Friday night’s football game.”

This is the first time this year the band has performed at halftime. The band marched and performed Michael Jackson’s “Thriller” along with the fight song as they marched off the field.

“This was completely new,” Glenn-Hoekstra said of the band learning the field show. “They’ve done a great job, their energy level is high and they are focused.”

For those unfamiliar with creating a marching field show, the three directors explained a typical process last week.

“There’s usually a week of music prep before band camp,” John said. “Then at band camp, you hope to have one song complete including drill and a start on the others.”

After that, there’s about three to four weeks of rehearsal as the school year begins. Typically, the first halftime field show of the football season is only halfway complete, depending on the number of songs in the show. Most field shows have four musical numbers.

“We asked them to get the first number in less than a week,” Glenn-Hoekstra noted. “And have the entire show ready with three weeks of rehearsal.”

The other two songs in this year’s show will be “Danse Macabre”, which will be performed by an ensemble of seniors Christopher Bryson, Katherine Shields, Courtney Hutchison, Trinity Holzkopf, Diona Edwards, and sophomore Kylah Melton. The show’s finale is Katy Perry’s “Dark Horse”.

When asked what brought her back to Humboldt, Glenn-Hoekstra’s eyes lit up, “John and I taught private lessons to students in the area and in Clarksville. Hands down, Humboldt has the most raw talent. When I heard there was a director position open in Humboldt, I wanted to come and add stability to the program. The past five years there have been three directors.”

She said it’s not about earning a paycheck but a bigger vision. That vision included a list of about 20 bullet points she presented when she applied for the position of band director.

She and John touched on a few of the bigger points of their vision. Tops on that list are to re-establish a culture of pride and excellence in everything they do as a band and directors.

Making the band more active again with band trips, lessons in the Humboldt community and the music community as a whole is another goal.
They know it will be impossible to get the numbers of band students like it was many years ago simply because the number of kids in school is down.

“We want to build a program at East (Elementary School),” John said. “We will work with (music instructor) Stephen Watson to get the kids interested in band. Our plans are to perform at East and have a presence at the elementary level.”

Part of that plan could include afterschool lessons for 5th and 6th graders, working with the Boys & Girls Club and hosting rehearsals at Humboldt Jr./Sr. High School.

“The key to growing (a band program) is starting early,” John noted. “We have to have a constant presence and mold the students to be part of the community.”

With the end marching season nearing, the trio is planning for a Veterans Day program and a Christmas concert.

After that, contest season hits. This is when the focus goes from the band as a whole to an individual performance with honor band and solo competitions for students.

“This is when you see kids shine!” Glenn-Hoekstra said with a smile. “This is also when we get seniors ready to seek scholarships, both music and academic. We want students to continue playing music, whether it’s college, in bands or as professionals. We want them to have high expectations for themselves.”

After concert season come parades. The Glenn-Hoekstras and Naffziger want the band to be active in area parades.

The final part of their vision is to revive the HHS Alumni Band. They will be reaching out to former band students and hopefully march in the Strawberry Festival next year.

With three dedicated instructors leading the Humboldt band program, things are looking up for Humboldt students. Let the music play! 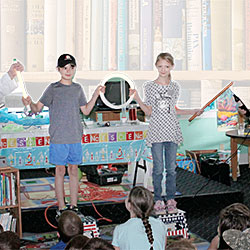 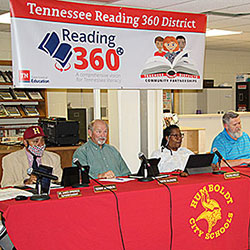 School board votes to get paid