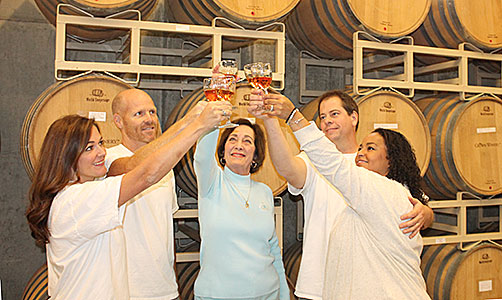 The queen has left the building or in this case, the Tuscan villa!

Humboldt’s most famous beauty queen, former Miss Tennessee Rita Howard, is no longer the queen of Crown Winery. The Humboldt winery and vineyard have new owners.

Scott and Dawn Fallert, and Andy and Christine Horner purchased Crown Winery and HRH Vineyard on September 22. They are excited about continuing the winery’s success and building it up to be even more successful.

“Our vision is to continue the hard work Rita and Peter (Rita’s late husband) put into the winery,” said Mrs. Fallert, who will manage the day-to-day operations. “We want to succeed and grow the business.”

The Fallerts and Horners also own a pizza business.

“We wanted to start a business around pizza but didn’t want a store front,” Andy said. “This worked out—partnering pizza with the winery.”

“We were interested from the start,” Scott said of buying the winery when it was on the market.

“We had talked about starting a business for a while,” Christine added.

The Howards purchased the 40-plus acre Hamilton farm in 2005.

“I thought he wanted to put cows on the farm,” Howard said of her husband’s plan. “Then Peter said he was going to plant a few grapes.”

That’s when HRH Vineyard was born, first with five acres of grape vines. Later more acres were planted and the couple built the Tuscan style villa, Crown Winery. More acreage was purchased adjacent to the vineyard. Now almost 30 acres of grapes are grown in Humboldt with seven different varieties. It is the largest vineyard in Tennessee.

Prior to Peter’s passing, the Howards had talked about selling the winery and vineyard in early 2016.

“We decided to slow down and put it on the market,” Howard recalled. “We had a dozen or so show interest and almost had a buyer.”

When that sale fell through, Eric Botbyl, who owns Botbyl Pottery and Companion Gallery located on the vineyard grounds, told Rita he has some friends who might be interested in purchasing the vineyard and winery. The Horners and Fallerts were indeed interested.

The two couples had previously met the Howards while attending Wine Downs at the winery.

“Scott and I, many years ago, said we would like to own a winery,” Dawn said. “I read a book on how to start a vineyard; but it takes a lot of work getting started.”

With the Horners and the Fallerts yearning to open a new business and hearing the winery was for sale, they saw the potential and decided dive right in especially the groundwork was already done. Vines were established and producing grapes. The beautiful winery was built and thousands of bottles were already being produced each year.

Growing the business is tops on their list. It is already a top venue for weddings but much of that business comes mostly from the Memphis and Nashville areas, Howard said. The Horners and Fallerts see potential in pulling more local business. Part of that plan includes adding different events.

“We need to make it more about the community through pizza night, farm-to-table dinners and offer something to pull in the local community,” Andy explained, “A harvest festival next fall is in the plans. We want people to buy a bottle of wine and enjoy themselves and feel like this is theirs.”

“We want to grow it as an attraction in the local area,” Scott noted. “We have to get our wine and venue exposed as much as possible.”

The couples want to maintain the website, www.crownwinery.com, and keep it current and updated.

Scott and Andy dabble in making home brew beer and would like to expand the winery by adding a brewery in the future.

They are also passionate about giving back to the community by partnering with local charities.

“It’s all about helping and giving back locally,” Andy said.
The potential for growth is already in place. Currently the vineyard produces more grapes than the winery can bottle wine. They sell their extra grapes to other wineries in the area.

“We are the largest vineyard in Tennessee and make amazing wines, Scott said. “We have to get distribution and utilize all these acres of grapes.”

On average, the winery produces approximately 50,000 bottles of wine per year. But the vineyard easily produces enough grapes to make 75,000 to 80,000 bottles.

Howard said the Fallerts and Horners make the perfect buyers for the wine operation.

“They are the perfect age and each are strong in their professional careers,” Howard explained. “Scott is a chemical engineer, which will be good for making wine. Andy is a mechanical engineer so he can keep the equipment running. Christine is in human resources so she knows insurance and personnel. And Dawn has worked events and is great with people.”

Even with four capable professionals, Howard isn’t leaving them high and dry. Now, weeks after the sale, she still is onboard showing them the ropes, inside and out. The new owners have taken the reins while Howard is still there to share her knowledge of the business. 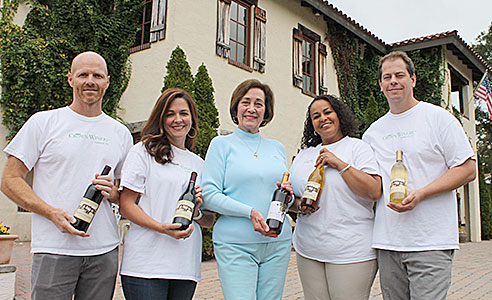 NEW OWNERS – Scott and Dawn Fallert (left), and Andy and Christine Horner (right) are the new owners of Crown Winery and HRH Vineyard. Founder Rita Howard (center) and her late husband, Peter, began their venture in wine-making in 2005 and built the business into Tennessee largest vineyard that produces 50,000 bottles of wine per year.