The 50th Annual Davy Days parade kicked off Saturday, Oct. 7 in downtown Rutherford despite a chance for rain.

The weather proved to be beautiful, and everything went off without a hitch.

The local police and sheriff’s departments led the parade route with sirens announcing their arrival. Dyer Cub Scouts Pack 41 carried the American Flag and stopped before the judges stand to lead the crowd in The Pledge of Allegiance.   County officials decorated their cars and participated as well.

Rutherford, Dyer, and Kenton Fire Departments sounded their sirens and waved for the crowd.  Business owners advertised as they drove through the route with their tastefully decorated vehicles.  The Gibson County Marching Pioneers proudly played “Rocky Top” for the all the onlookers.

Even a casket of Davy Crockett on an old buggy came through town followed by mourners of Volunteer Insurance.

Beautifully decorated floats, including the Class of 1967 and the Northwest Gibson Co. YMCA, really put on a show for the judges.  The horses, of course, pulled up the rear and finished the parade.  A Glo-Run 5K was set for the evening and then the grand finale fireworks display.

The day started with a car and tractor show.  Many participants showed up and showed out with their restored automobiles and tractors.  The local tennis courts were home to a pet show.  Adults and kids entered their family pets to be judged.  A hedgehog even participated.

Vendors were available on just about every corner to provide delicious treats for the hungry masses.

Emma Davidson and Sadie Davidson of Rutherford are the proud handlers of a one year old female hedgehog by the name of Willow. Willow won second place in the most unique and smallest pet categories.

Lilly is a seven year old poodle who resides in Rutherford with her owners Leslie Watson and Brian Watson. She won a couple of awards including a two-way tie for first place in talent and second place in the pure breed contest.

Peyton Foster traveled to the pet contest from Memphis. He is the proud owner of Shiloh, a one year old blue tick coon hound whose pedigree boasts of being a half-sister to Smokie, of UT Vols fame. Shiloh won a two-way tie for first in talent as well as winning first place for pure breed dogs.

Biscuit won the best costume award. She is shown by Emma Dean and Jason Eddlemon.

Oscar, a ten month old bearded dragon took home the ribbon for most unique pet. He was shown by owner Connor Bell of Dyer who remarked that cleaning the cage for his pet is the hardest thing about owning a bearded dragon.

The best of show ribbon went to Ridgely, a police dog for the state of Tenn. Ridgely is trained to sniff out arson. Photographed with Shiloh is Allie Shanklin of Dyer. 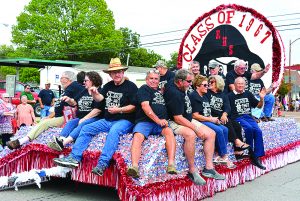