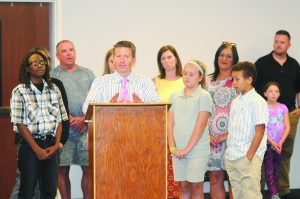 CELEBRATING SUCCESS – Director of Schools Jonathan Criswell and the MSSD Board of Education recognized the faculty, staff and students of Milan Middle School for helping MMS earn a TVAAS score of Level 5 last Monday night. Principal Chris Jones (center) brought some of the many excellent MMS students and teachers to the meeting. Photo by Logan Watson.

The Milan Special School District’s Board of Education gathered for a brief meeting last Monday night, celebrating recent achievements by Milan Middle School and the MSSD.
The Board recognized a number of teachers and students from MMS who were in attendance, congratulating them on helping the school achieve a Level 5 score from the Tennessee Value-Added Assessment System (TVAAS).
“This is just a small group of the students and staff at the middle school that make us such a great school,” said MMS Principal Chris Jones. “I’m excited that we were recognized by the state.”
During the Public Comment portion of the meeting, MMS Physical Education teacher Scott Paterson applauded his fellow teachers, as well as Principal Chris Jones and Assistant Principal Dana Rainey.
“I’d like to say congratulations to the middle school,” Patterson said. “We really have a team there. We have good educators that really care about the kids and really care about each other. Mr. Jones and Mrs. Rainey say nothing, so I want to recognize them. Without them, we wouldn’t have a very good team. They’re really humble, but they mean a lot to us as well.”
Director of Schools Jonathan Criswell noted that a Level 5 score is the highest ranking possible for a school, and while Milan High School received a Level 1 designation, he is still pleased with some of the outcomes from the evaluation. A gain of 0.6 percent was made in the average ACT scores from MHS, which Criswell said is more important for the students than the school’s TVAAS score.
“The high school ACT scores came back a lot higher than they have been in the past,” Director Criswell told the board. “They really raised ACT scores back to the level that’s expected here in Milan. That puts us right at the state level. The high school really has put an emphasis on the ACT, because that’s what students get into college with now.”
Director Criswell also congratulated the Science and Social Studies teachers throughout the MSSD for earning TVAAS scores of 4 and 5, respectively. MHS earned a score of Level 1, making the MSSD’s district-wide score a Level 3. TVAAS scores for Milan Elementary were not available because, due to the problems with TN Ready, the school was not tested last year. 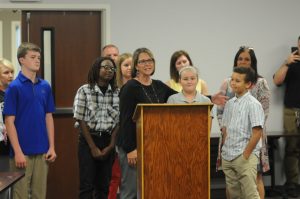 “What I’ve conveyed to Mr. Scott is that we want to be at least a three,” said Director Criswell. “As long as we’re a three in value-added on the state test and our ACT scores continue to improve, that’s what we want. We want the ACT scores to improve because that’s the greatest benefit to our students.”
The board also heard reports from the Seamless Summer Meals program and the Alternative School. Vickie Dunaway reported that over a period of 29 days between June and July, SSM served a total of 2,418 breakfasts, 6,107 lunches and provided 3,933 snacks. The program was based out of the Milan Middle School cafeteria and had a total of eight serving sites throughout the district. In those 29 days, the SSM program brought in $35,869.33 in revenue and spent a total of $25,616.28.
According to Mr. Kevin Ellison, the Milan Alternative School served a total of 68 students during the 2016-17 school year. Five students were repeat offenders and two were transition students. 43 of the students were referred from Milan High School (two transition and two repeat offenders). Milan Middle School referred 20 students (two repeats) and Milan Elementary referred six students, one of whom was a repeat offender.
Mr. Ellison stated that some of the offenses included continuous misbehavior, bus violations, theft, fighting, bullying, pornography and weapons. There were 27 black males, 19 white males, 11 black females, 9 white females and two Hispanic students.
The Alternative School also hired two new teachers this year, Ms. Angela Smith, a certified teacher, and Mr. Terrell Green, a teacher’s assistant.
HIRING OF AFRICAN AMERICAN TEACHERS – Director Criswell notified the board that MHS has hired Ms. Dimitria Sanders as a teacher’s assistant. Ms. Sanders will take the place of Dominique Moore, who resigned his position and joined the Milan Police Department.
POLICY APPROVALS – The board voted to approve the second reading of policies 1.407 (School District Records), 2.500 (Deposit of Funds), 2.703 (Audits), 3.201 (Safety), 3.202 (Emergency Preparedness Plan), 3.400 Student Transportation Management), 4.201 (Credit Recovery), 4.301 (Interscholastic Athletics), 4.502 (Parental and Family Involvement), 4.600 (Grading System), 4.700 (Testing Programs), 5.200 (Separation Practices for Tenured Teachers), 5.201 (Separation Practices for Non-Tenured Teachers), 5.202 (Separation Practices for Non-Certified Employees), 5.600 (Staff Rights and Responsibilities), 5.701 (Substitute Teachers). Policies 4.402 (Selection of Instructional Materials Other Than Textbooks) has been deleted. The TSBA also recommended a new policy, 5.203 (Recommendations and File Transfers).
The board approved the second reading of policies 4.601 (Reporting Student Progress) and 6.200 (Attendance) to reflect changes recommended by the MSSD Policy Committee. Language concerning the Modified Block Schedule and 9-week progress reports was deleted from policy 4.601. Language in policy 6.200 was changed to state that students will be required to make a passing grade in four out of five full unit subjects in order to reclaim their driver’s permit or license after having it suspended due to unexcused absences.
AUDIT CONTRACTS – Finance Director Sharon Petty informed the board that the time had come to renew the MSSD’s audit contracts with Alexander Thompson and Arnold. The contract for the audits of the individual schools increased three percent from the 2016-17 school year, while the cost of the district-wide audit increased by six percent. The MSSD audit will cost $21,195 and the school audits will cost $11,950.
EXECUTIVE MEETING – Prior to adjourning the meeting, the board members in attendance left the room to meet behind closed doors with the School Board Attorney, Judge Collins Bonds. The Mirror-Exchange was not privy to their discussion. 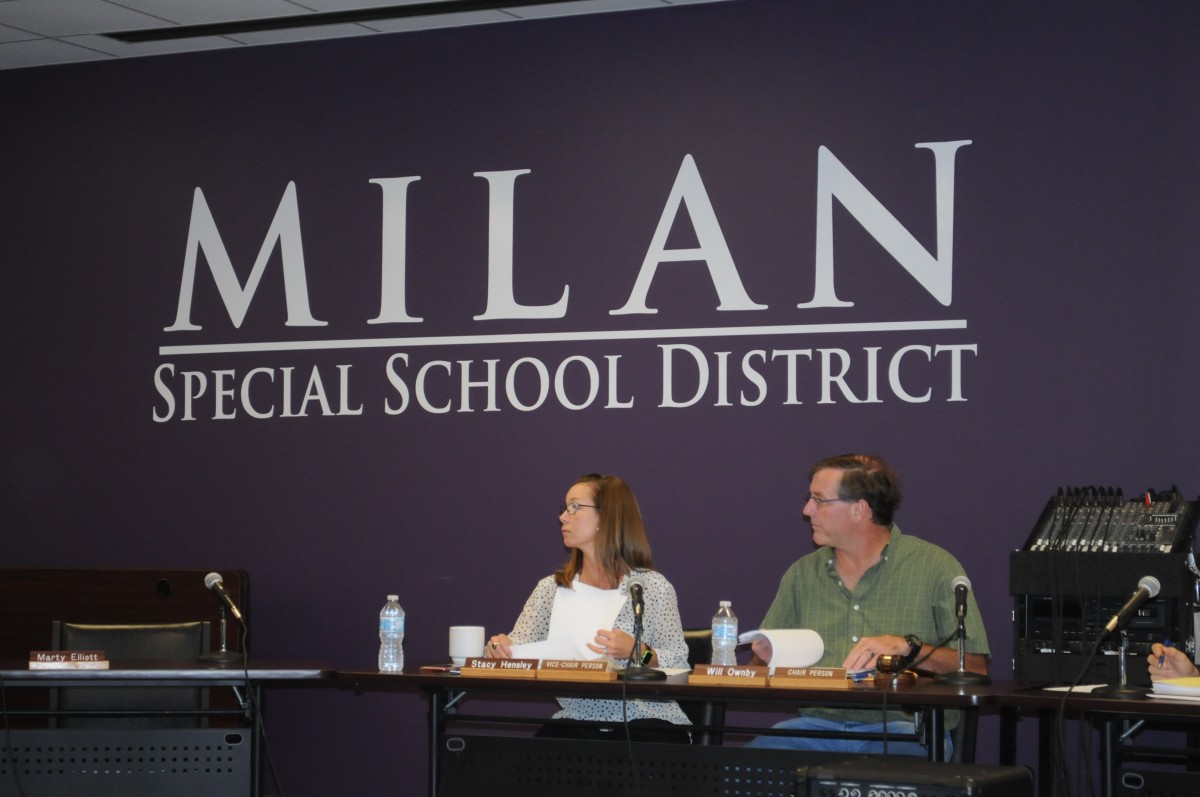