Citizen Lavern Parnell thanked the mayor and board for getting the ditch cut and cleaned by her home. Mayor Robert White said the city is in the process of doing all the ditches in the city.

“There is no way we will get them all cleaned by the time of the Davy Crockett Days but we are making good progress. Limbs are being picked up the first and third Mondays.”

Water Supervisor Eddie Watkins said citizens are supposed to come to city hall and pay $10 to have cardboard boxes picked up by the city.

White noted the new tractor to replace the 30-year old John Deere 2240 has not yet come in but it has been shipped.

Fire Chief Rob Rahm reported the fire department responded to 627 McKnight Street on September 2nd for an oven on fire. They also assisted Gibson County on a wreck on September 17th involving a motorcycle.

Police Assistant Chief Tim McGarrity reported the police had responded to 200 calls since the last board meeting.

Watkins also reported the town lagoon was shut down for the month of August; there was no discharge. They opened it back up the second week of September due to all the rain. Over on Knox Street, a sewer line camera had to be physically retrieved after getting hung on the tap at 521 Knox Street. The camera is worth $25-35,000 dollars, Watkins said. The street was dug up to retrieve it.

On the West side of Callis Street, there are holes developing right beside the road. Watkins suspects there is a culvert system underneath it that’s collapsing.

Barbara Hunt of Volunteer Insurance in Rutherford reported she had a recent conversation with TML about Davy Crockett Days and the town of Rutherford is not in compliance with their guide-points. Street vendors that set up and sell goods should be required fill out an application TML has supplied. Before they can set up and sell in Rutherford, they have to show proof they have insurance. The city of Rutherford will no longer be responsible; they must have privatized insurance.

Alderman Van Don Greer said some vendor could apply their homeowners insurance to this requirement.

If they are not a business they may be able to use their homeowners insurance. TML rules say that a business must have $1 million worth on their insurance, Hunt said.

Alderman James Roach asked if churches will be responsible for insurance. Hunt answered in the affirmative.

“We suggest individuals call their homeowner’s agent to see if they are covered,” Hunt said.

Insurance coverage for the new backhoe was discussed. The first year payment is for complete coverage. With the insurance it brings the total cost to $65,500. Its basically extended warranty, Mayor White said.

The board is considering purchasing a truck on GovDeals and the board authorized up to $10,000 on an online purchase. 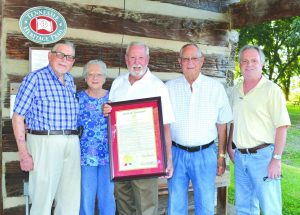