FacebookEmail
| logout
Arsenal cleanup achieves EPA milestones for success
By Steve Short
The cleanup of hazardous waste in the Milan arsenal area reached major milestones for success this year, engineers reported during the third annual public review Sept. 20 at the Senior Center.
In July, EPA (Environmental Protection Agency) officials congratulated parties involved in the cleanup for completing significant remedial actions and compliance.
This year the cleanup earned “Preliminary Closeout” status from EPA, a major step toward removal from the EPA Super Fund site list.
The Milan project will also meet another significant EPA target in October – “Site-wide Readiness for Anticipated Reuse.”
“We are very excited to have gotten under our belt our preliminary closeout report, which is a big milestone for EPA,” said Anna Cornelious, environmental engineer from EPA’s Region 4 office in Atlanta. She attended her first meeting in Milan last week.
“What the (Preliminary Closeout) basically means, is that Milan has done everything they said they would do in that ROD (Record of Decision) and those millions of RODs they had,” Cornelious explained. “They’ve done it, and things have been constructed as prescribed, and EPA is happy. Not a lot of Super Fund sites meet that target. Milan passed with flying colors. We were very happy to have that as part of our EPA highlights. We’re looking forward to using our PCOR milestone as part of their big highlights and big deal, success stories moving forward.” 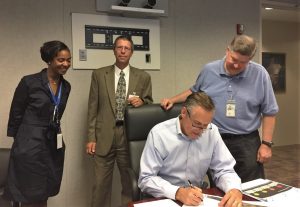 ARSENAL CLEANUP PROJECT ACHIEVES MILESTONE – The cleanup of hazardous waste and toxic substances in the Milan arsenal and city limits achieved a major milestone in July, 2017, engineers reported during an annual public meeting last week, Sept. 20 at the Milan Senior Center. Officials with EPA (Environmental Protection Agency) congratulated parties involved in the cleanup for completing many remedial actions. The project, which dates back to 1978 and has cost more than $190 million, earned Preliminary Closeout status from EPA, a major step toward removal from the EPA Super Fund site list. Marking the moment in July, 2017 with a ceremony at the EPA Region 4 office in Atlanta were (from left) Anna Cornelious, EPA; Bill Corrigans, MLAAP Restoration Programs Manager; Randall Chaffins, Deputy Division Director for EPA Region 4, signing documents for Franklin Hill; and Carl Froede, former EPA Programs manager.

Contamination of soil and groundwater in the arsenal occurred during the making of ammunition between 1942 and 1978. The cleanup effort began around 1980 and has cost nearly $200 million.
Ms. Cornelious and Bill Corrigan, MLAAP Restorations Programs Manager, said fewer than five Super Fund sites in the U.S. have earned Preliminary Closeout status due to cleanup progress.
“Another target that we’re going to be able to meet by the end of October is the ‘Site-wide Readiness for Anticipated Reuse,’” Cornelious added. “That means, once you’ve done everything that you said you were going to do in the ROD (Record of Decision) as action – all the caps and the groundwater network – then you have to go into another step, and say, we’ve got the groundwater under control. It’s not migrating off site. It’s not getting worse. Milan is eligible for that. Congratulations! It’s been a very productive four months.”
Cornelious commended the “great teamwork” and “healthy partnerships” of groups involved in the Milan cleanup – including the Army, arsenal leaders, and regulators from EPA and the Tenn. Dept. of Environment and Conservation. “You’ve done everything that we’ve asked you to do,” she said. “This type of partnering didn’t exist twenty years ago.”
Bill Corrigan said the EPA milestones indicate that workers on the Milan project have properly implemented and operated remedies to treat the contamination. Ms. Cornelious said many Super Fund sites in the U.S. are far from meeting EPA’s goals for closeout and anticipated reuse.
A 5-year review of the Milan project will be done in two years, and Ms. Cornelious said the “great work” done in Milan could lead to the arsenal property being fully ready for reuse and redevelopment.
Groundwater treatment
Fred Santos, Project Manager with the ECC environmental firm from Boston, reviewed long-term monitoring, treatment and maintenance activities done in the past year.
Mr. Santos summarized work at two groundwater treatment plants, OU3 and OU4, which are located on arsenal property. OU3 is near former production lines B and D in the plant and receives water from 7 extraction wells. OU4 is close to Milan City Park and Hwy 104, and receives groundwater pumped from 9 extraction wells.
The groundwater treatment plants operate around the clock, removing explosives from groundwater that is pumped from below ground to the plants. Engineers plan to operate the plants until the year 2030, while groundwater monitoring may continue for 60 years.
During the July 2016 – June 2017 time frame, the OU3 plant treated 575,850,000 gallons of groundwater at a rate of 1,200 gallons per minute. 4,653 pounds of explosives were removed from the groundwater.
The OU4 plant near City Park treated 642,220,000 gallons of groundwater at a rate of 1,300 gallons per minute during 2016-17, removing 689 pounds of explosives. Engineers explained the near 4,000 pound difference in explosives by saying contamination is lower in the OU4 area.
Santos said ECC engineers hope to increase flow rates at both treatment plants next year, pending approval from EPA and the Tenn. Dept. of Environment and Conservation. 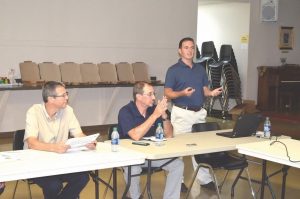 ENVIRONMENTAL ENGINEER Fred Santos (right), Project Manager for the environmental cleanup at the Milan Army Ammunition Plant, spoke at a public meeting Sept. 20 at the Senior Center, giving a review of progress during the past year. Officials from EPA awarded the cleanup program two major milestones for success.

Engineers measure groundwater contamination with extensive sampling. Last year, July 2016 – June 2017 – was the eighth year for a Long Term Monitoring Program. A total of 276 monitoring wells were sampled for explosive contamination.
28 groundwater samples showed that some toxic explosives, such as RDX, are breaking down through natural attenuation into nontoxic substances.
Maps showing contaminated groundwater plumes in the Milan arsenal and city limits area were displayed at the Sept. 20 public meeting. The contaminated groundwater is far below the surface, an estimated 125 feet in some places, and does not pose a threat to the city’s water supply, because city wells are located miles south of the city. Ordinances prohibit residents from getting drinking water from private wells.
The OU4-R1 groundwater plume, with high contamination levels, is below ground in the vicinity of the high school baseball field at City Park. Contamination levels in the plume of the toxic explosive RDX range from 100 parts per billion to 1,000 parts per billion. Bill Corrigan said the contamination is deep below ground and not a health threat or threat to Milan’s drinking water.
The ECC firm is also collecting surface water samples at three locations on the Rutherford Fork of the Obion River near the OU3 treatment plant. Results of tests were positive, showing that groundwater plumes are not contaminating the river, said Mr. Santos.
Mr. Santos also reviewed land use controls and city ordinances which prevent the public from coming into contact with contaminated soil and groundwater.
Posted in Mirror Exchange Breaking News, News