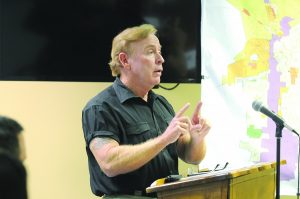 ZONING FOR THE FUTURE – Milan Building and Codes Officer Jim Pillow discusses the rezoning of an area of South First Street with Mayor Beasley and the Board of Aldermen. The change would not affect businesses already located in the zone, but would enhance the city’s opportunities to entice businesses to locate in the area. Photo by Logan Watson.

The Milan City Board voted to green-light a zoning change for a swath of land along South First Street last Tuesday night, setting the city up for future growth on the southern side of town.
The area, which stretches from Steve Marsh Ford to the city limits at Denton Fly Road, was rezoned from B-2 (Retail Business) to B-4 (Commercial Services). According to Mayor B.W. Beasley, the change will not negatively impact the businesses already located in the zone.
“They lose absolutely no privileges,” said Mayor Beasley, who stated that he discussed the change with all of property owners that would be affected. “It’s really just a forward-thinking move. It enhances our economic development potential on that side of town.”
Ordinances creating the new Commercial Services zoning designation, rezoning the property in question and amending Title 8 of the Municipal Code regarding distance requirements for on-premises beer permits, off-premases beer permits and retail package liquor store certificates were passed 7-0 on the first readings. Building and Code Enforcement Officer Jim Pillow stated that the amendment would only apply to the new B-4 zoning area.
“The B-4 designation really makes it more conducive to the development of chain restaurants in the South First corridor,” said Pillow. “It reduces the distance required for alcohol sales from places of public gathering.” Pillow noted that if the city were to land a major chain restaurant like Chili’s or a similar business, the new B-4 zone would allow that chain to locate in the area without stifling any other form of growth.
NEW POLICE EQUIPMENT – The Board also voted to approve bids received by the Milan Police Department for new equipment, including 11 new bulletproof vests, three new vehicles and the installation of equipment in those vehicles. Police Chief Bobby Sellers stated that the vests are only good for a period of five years and cost roughly $870 each. A grant program through the Department of Justice covers 50 percent of the cost for vests. The bid was awarded to GT Distributors, Inc. for the amount of $11,160. Sellers told the Mirror-Exchange that the MPD will also be purchasing three new vehicles in the future. The department will also be selling three of the older-model, high-mileage vehicles currently in the fleet and replacing them with police-ready Ford Taurus models. The bid for the vehicles was awarded to Steve Marsh Ford. Chief Sellers stated that it would be beneficial to both the department and the city to purchase the vehicles locally, as fewer officers would have to be taken off the street in the event that one of the cars needed to be serviced.
The board also awarded a bid in the amount of $12,685 to Privitt Services to outfit the department’s new vehicles with the proper radios, sirens, lights and other law enforcement equipment. 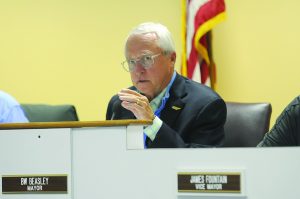 LANDFILL FEES – The board also discussed whether or not to waive landfill fees for Dale Nelson following the demolition of old buildings on Williamson Street. Some Aldermen were split on the discussion, as it seemed to show preferential treatment for Nelson. Nelson’s request did, however, include a stipulation that the amount only be waived if he began construction of a new commercial building on the site within one year of the demolition.
Building and Codes Officer Jim Pillow stated that it would have cost the city approximately $30,000 to demolish the building on its own. Pillow noted that the building had been condemned for close to two years before it was purchased by Nelson. Landfill charges to dispose of the rubble totaled $13,439.25. Alderman Jay Black stated that the building was a “potential lawsuit waiting to happen” and several other board members agreed that the city should show Nelson “a good faith effort” since he was committed to building a business downtown. Mayor Beasley stated that the removal of the landfill charges was no different than the concessions made to industries that chose to locate in Milan. The motion was approved by a 5-2 vote. Alderman Jack Cunningham was absent.
OTHER BUSINESS – The Board also voted to approve Phase I of the ADA Transition Plan and to award a low bid of $12,958 for two new lift stations received from Bar Environmental. The board also voted to adopt the 16th edition Safety Manual of the American Public Power Association, with the caveat that the city carry over suggestions from the 15th edition so that linemen would not have to wear gloves until they reached a certain proximity to the lines. Director of Milan Public Utility Jason Griggs stated that requiring the linemen to wear gloves would hamper their ability to climb the utility poles because of the current climbing equipment being used. 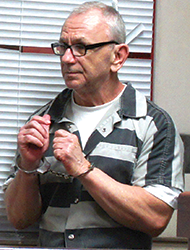