The Tennessee Department of Education’s annual report cards were released today, and Milan Middle School passed with flying colors.
The school achieved a Level 5 designation from the state, classifying the school as “Most Effective” and acknowledging that the students at MMS are making “substantially more progress than the Standard for Academic Growth”.
“Milan Middle School is honored to be one of the few schools that achieve such a high rating from the state,” said MMS Principal Chris Jones. “We have an outstanding staff that works hard to ensure our students are successful and prepared for the future. I am truly fortunate to be part of such an amazing team.”
The Tennessee Value-Added Assessment System (TVAAS) measures the impact schools and teachers have on their students’ academic progress. Rather than measuring whether or not students make proficient scores on the state’s assessment tools, TVAAS scores measure student growth from year to year and helps educator’s identify best practices and implement programs that meet the needs of their students.
MSSD Director of Schools Jonathan Criswell also reported that Milan High School received a Level 1 designation from the state while Milan Elementary did not receive a TVAAS score at all.
“A value-added score requires two years of testing data,” said Director Criswell, explaining that last year’s TN Ready testing snafu caused a break in the data. “MES students will not have a value-added score since the state test was not scored in 2015-2016 for grades 3-8.”
“Several changes have occurred during the past year that will provide a foundation for the high school to improve their impact on student learning,” Criswell continued. “The overall value-added scores were better than last year, but were still below the state average.” According to Director Criswell, the schedule at MHS has been changed to reflect a more student-friendly day and the recent change in leadership should provide stability for years to come so that a culture of excellence can be re-established.
As a district, the MSSD received a Level 3 ranking, showing a marked improvement over last year’s Level 1 score. A Level 3 designation shows that the MSSD is performing on average with the other schools in the state.
“We are glad to see that our investments in professional development over the past year are impacting student learning,” Criswell said. “We continue to strive to make the necessary adjustments to ensure that our students achieve at the highest of levels.”
The district also received high marks in the subjects of Science and Social Studies, earning value-added scores of 5 and 4, respectively.
In addition to the composite TVAAS scores for the individual Milan schools as well as the Milan Special School District released today, the MSSD received preliminary ACT scores, showing a composite gain of 0.6 percent.
“Gains were made in all four subject areas of ACT scores,” said Criswell. “A gain of 0.5 percent is considered a huge gain on the ACT. As a more in-depth analysis of scores is released, we will explore strategies that were implemented that impacted our scores.”
“This is the first score the middle school has received on the new standards,” Criswell told the Mirror-Exchange. “The middle school faculty, staff and administration have done a great job on adapting to the new standards and tests. They’ve created a great culture there and everyone has bought into that culture. I think MES has transitioned well, and teachers have addressed the change in their teaching strategies and the high school is continuing to make the necessary adjustments to those new assessments. We look forward to continued success at MMS and hope that the new administrative staff at the high school can provide that crucial support.” 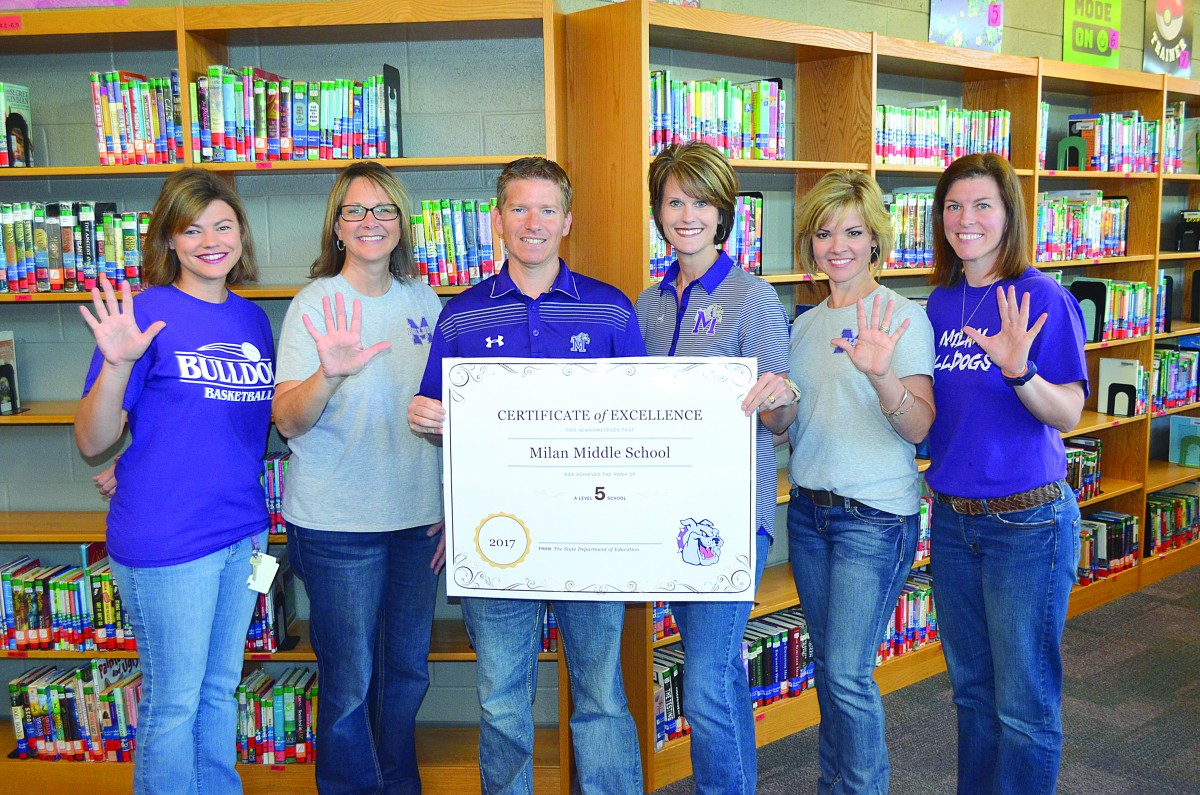 LEVEL 5 SCHOOL – The administration, staff and faculty at Milan Middle School received a Level 5 designation from the state on their annual TVAAS report card last week. A Level 5 school is considered the most effective and shows that the students are progressing at a higher rate than the state’s Standard for Academic Growth. Pictured are (from left) Emily Bryant, Janet Robbins, Principal Chris Jones, Assistant Principal Dana Rainey, Tara Miller, and Ashley Seavers. Photo by Victor Parkins.