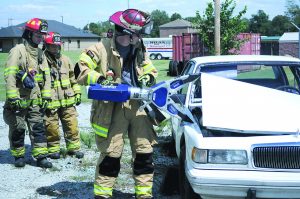 SAVING LIVES – Firemen Jeremiah Thompson and Jason Wall watch on as Daniel Butler uses the MFD’s new spreader to pry open the hood of a vehicle in order to access the battery. The new battery-powered extrication tools are more powerful and more reliable than the hydraulic set previously used by the department. Photo by Logan Watson.

The “Golden Hour”.
It’s a term used by firefighters, first responders and other emergency personnel to describe the first hour after a traumatic injury. Getting the victim to a hospital or trauma center within that time period is crucial to their survival, and Milan Fire Chief Steven Dillard doesn’t want to waste those precious minutes in the field worrying about outdated equipment.
Firefighters with the MFD spent last Wednesday afternoon training with new, state-of-the-art, battery-powered extrication tools that will be replacing the hydraulic equipment that they have relied on in the past.
“It’s not every day that we get those calls, but when you need it, you really need it,” said Chief Dillard of the MFD’s extrication equipment. Commonly referred to as the “jaws of life”, these tools are essential when serious accidents occur. “We hope we don’t ever have to break them out, but the reality is, we do.”
Thankfully, according to Chief Dillard, serious calls like those are few and far between, but when those accidents do happen, he needs to know that his men have the proper equipment. Chief Dillard says his department generally gets fewer than 10 extrication calls per year, but has been called to assist other departments outside the city limits.
The MFD purchased an electric cutter, spreader and ram made by Hurst, with a price tag of more than $27,000.
Chief Dillard also noted that the new tools have more spreading and cutting power, which is important when dealing with newer model vehicles. To meet requirements for safety and fuel efficiency, many vehicles began using a lightweight, ultra-high strength steel called boron. Boron can be found in most vehicles made after 2004. However, reenforcing those weak points on vehicles has made it harder for first responders to gain access to people injured in accidents. The MFD’s new cutter is capable of fracturing those boron components and the spreader can generate around 147,000 pounds of pressure. 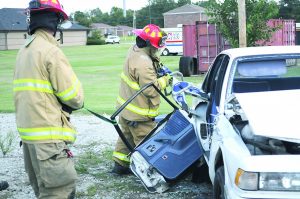 Chief Dillard said that the electric tools also reduce the amount of noise at the scene of an accident. “Less noise equals better communication, which makes the scene safer for everyone.” The MFD will likely replace their remaining set of hydraulic tools in the future.
“These tools put us two steps above where we were,” Chief Dillard said. “Battery powered tools need less maintenance than the hydraulic ones, they don’t have hoses and we won’t have to maintain an engine just to pump the water. Our tools were 20 years old, and cars have changed a lot since then.” 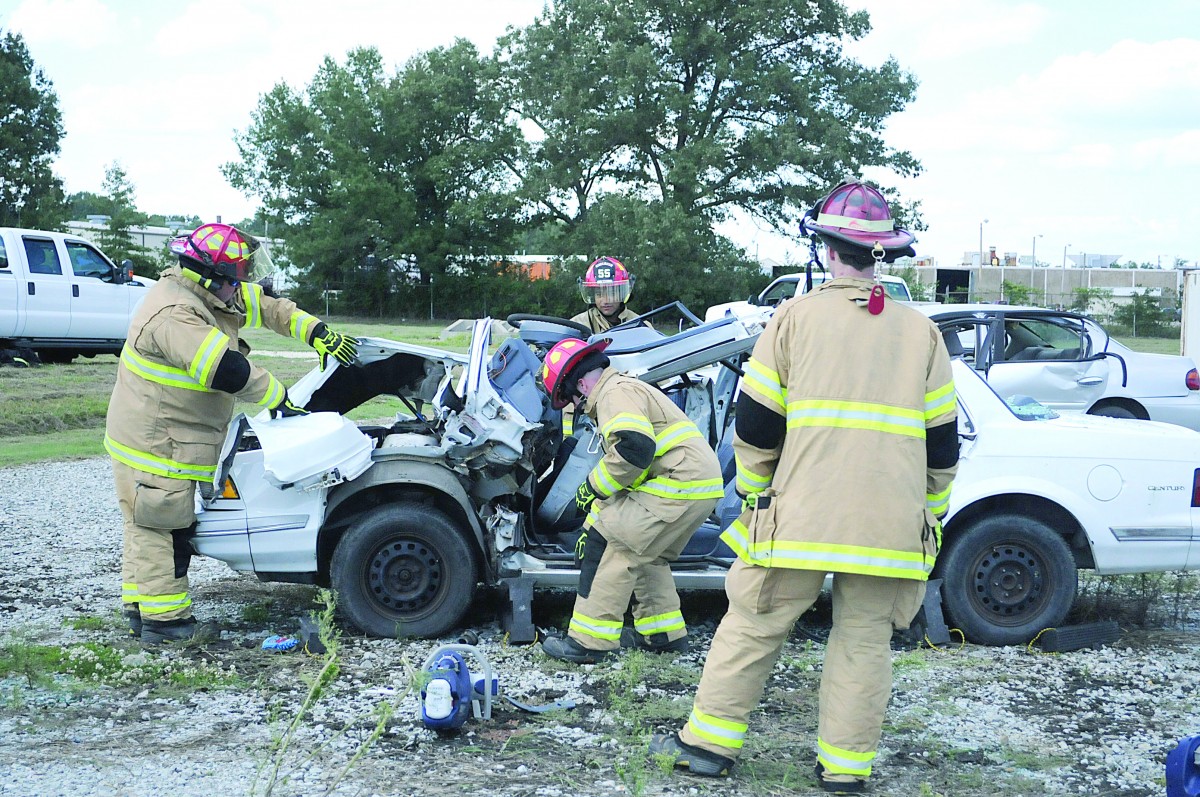 NEW TOOLS – In just minutes, firefighters with the Milan Fire Department used their new tools to shred this previously undamaged Buick Century. Fire Chief Dillard says these new tools will be more reliable and help reduce the amount of time it takes to remove a victim from the scene of a serious accident. Photo by Logan Watson.