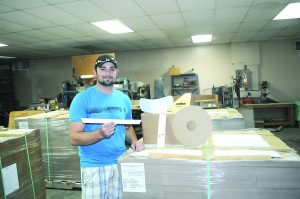 D&M CHIPBOARDS has been converting huge rolls of paperboard down to specific sizes and shapes in Milan since 1984. Here, Cody Townsend displays a variety of paperboard products the company ships out each day.

Ever wonder where that thin strip of cardboard tucked behind the collar of your new shirt comes from?  Or how about that paperboard stuffing you pull out of a new pair of boots or that big, flat piece of cardboard that covers the top of a wooden pallet?

Chances are, they were made right here in Milan, Tennessee.

For 33 years now, D & M Chipboards has been buying truckloads of rolled paperboard and converting it to whatever size their customers need.

The business was founded on December 1, 1984 by Dale Townsend and his partner Mike Wilson with $10,000 and a drive to succeed.  They started the operation in the old feed mill on Cedar Street before expanding to their current location on East Van Hook.

In 1991, Townsend bought out Wilson’s interest in the company and brought in his wife, Melinda as a partner.  About 12 years ago, their son, Cody, joined the business so his dad could partially retire and play more golf.

“In the beginning, we had no idea what we were doing,” joked Townsend while sitting behind his desk in their 18,000 square foot building.  “I was the plant manager of Rock Tenn when it burned in 1984 so I knew a little bit about the packaging business,” he said.

Although the knowledge of the paperboard industry came over time, D & M knew enough about customer service and modest pricing to get their business up and going.

“In all of our years of business, I probably haven’t had 10 complaints about the product we deliver,” said Townsend.  “We’ve always had very fair pricing and taken good care of our customers  We don’t mind a bit telling them what our profit margin is.” 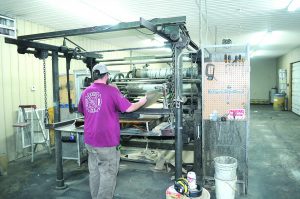 D & M will cut paperboard down to any size, for just about anyone and ship it anywhere.  Keeping a diversified customer base has helped the company thrive.

Rather than employ outside salesmen to grow the business, D & M chose to stay small and let their reputation of customer service and specialized products drive the company.  Almost all of their business comes from word of mouth or repeat customers.

“We’ve never relied on just one kind of business or product,” explained Townsend, who employs 5 full time workers.  “We’ve cut paperboard a jillion different sizes and shapes.  We could have gotten really big over the years but decided not to.  We didn’t want to tie up all of our money in equipment and people and we learned that there’s a better profit margin doing what we do.  We’ve kinda found a niche that works for us and we’ve stuck with it,” he said.

Over the years, D & M has converted paperboard from huge rolls down to custom sizes for companies like Fruit of the Loom, Ms. Sullivan’s Pecan Pies, General Cable, American Paper and Twine, Diversified Paper and Crowne Packaging.  During an average week, the company will cut over 42,000 pounds of paperboard.

Flipping through his orders using a unique index card filing system, Townsend pointed to one customer that has purchased over 850,000 pieces of 8.5X11 paperboard since January 1 of this year.  Those thin pieces of paperboard will soon be used to back and separate stacks of shipping labels.

“It’s really mind boggling how many uses are out there for paperboard,” noted Townsend about all the uses of the products he’s shipped out over the years.  “I have no idea where half of this stuff goes.  We’ve had a lot of success but a lot of good people have helped us and the good Lord has blessed us.”

D & M outgrew their original location in 1993 and purchased the Van Hook location (where Townsend started his career) at auction.  The building has been expanded several times to accommodate loading docks and warehouse space.

Townsend admits that his equipment is outdated, pointing out one piece that is around 50 years old.

“What we do hasn’t really changed that much over the years,” he said.  “Most of our equipment is older than I am but it serves us just fine.”

While a new stamping machine could cost well over $150,000, Townsend said his company has had good luck over the years buying used equipment that works just as good.

“I’ve had people to laugh at my equipment it’s so old,” he added.  “But I’ll look around and find a good piece of equipment that’s used at an auction for maybe $10,000.”

As for the future of the company, Townsend referred to his son, Cody.

“I really have no idea where it’ll go—that’s up to Cody,” said Townsend.  “There’s plenty of business out there if he wants it.  As long as people are packaging and shipping things, there will be a need for our products.”

Products:  D&M converts large rolls of paperboard to whatever sizes or shapes their customer needs. 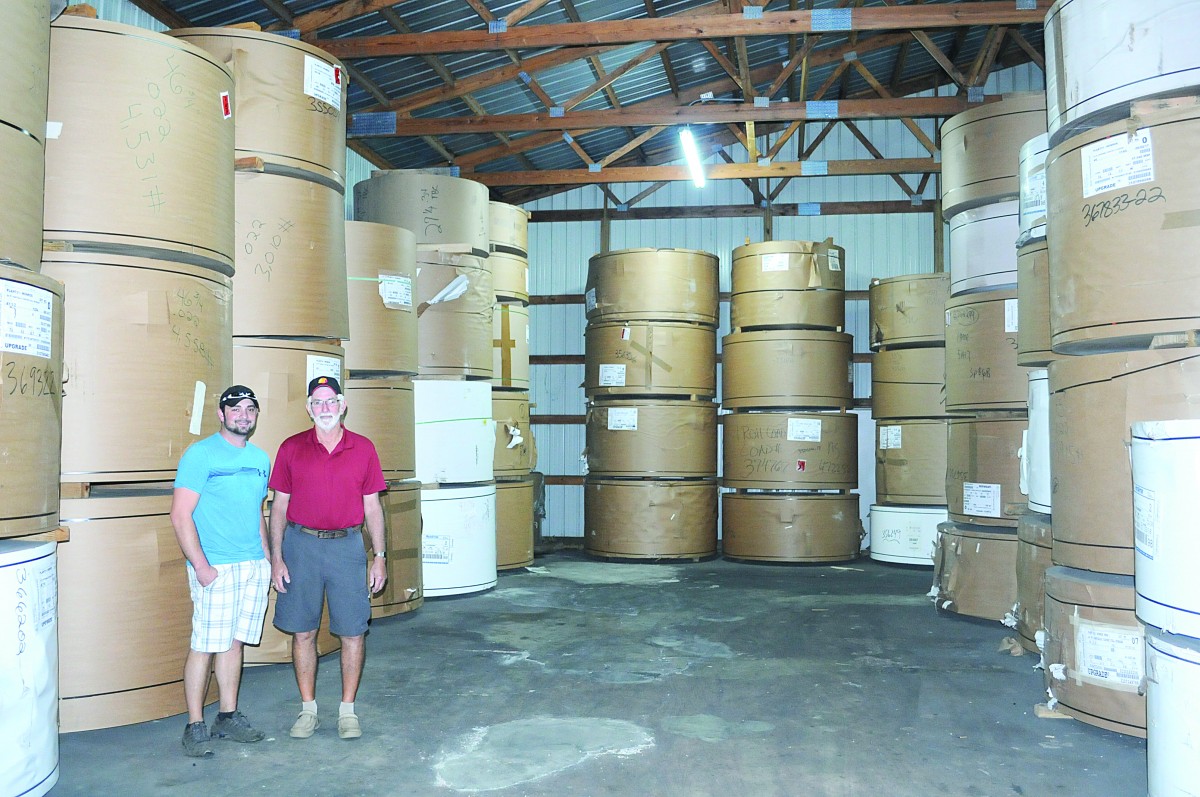 CONVERTING PAPERBOARD TO SIZE – D&M Chipboard owners Dale and Cody Townsend stand in front of giant rolls of paperboard inside their warehouse on Van Hook Street.