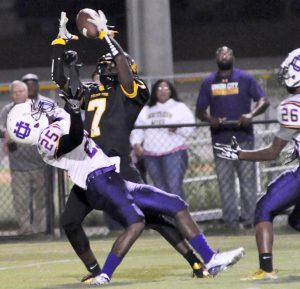 As expected, Friday night’s Region 7-2A match-up between Peabody (ranked No. 3 in Class 2A state poll) and Union City (rated No. 5) proved to be a slugfest.

The Golden Tide managed to take a 14-0 lead late in the first half, but the Tornadoes retaliated with 21 consecutive points to establish control for a 21-14 win.

Peabody’s stout defense played well early, but when Union City finally got its offense in sync the Tide defense could not get off the field. The Tornadoes powerful veer offense hammered the PHS defense 57 times for 304 yards rushing (an average of 5.1 yards per attempt) and three touchdowns.

Time of possession was an important factor in determining the outcome of the game. The PHS defense was relegated to staying on the field for the majority of the game due to Union City’s time-consuming running game and the fact that the Tide offense failed to consistently sustain drives, especially in the second half.

Trenton’s offense managed 30 rushes for 69 yards (2.3-yard average) and 105 yards on eight-of-17 passes for a total of seven first downs.

“It was a slugfest and our guys played hard. I felt like, coming in, we were the better team and I still believe we are the better team. We look forward to getting another opportunity at these guys in November,” explained Peabody Coach Shane Jacobs.

Junior Courtlen Wade started for injured quarterback Cooper Baugus, who is sidelined due to a hip injury sustained in the Milan game. The athletic dual-threat quarterback engineered a pair of scoring drives on

Peabody’s second and third possessions of the contest. Powerful running back Jarel Dickson capped a six-snap, 61-yard series with a one-yard touchdown plunge, and Wade connected with wide receiver Je’Nevee Robinson on a fade route for a 20-yard touchdown pass. Zach Grooms kicked both extra points for a 14-0 lead.

Late in the first half, Union City finally got its offense in gear with Andrew Easley’s 12-yard touchdown run around the right perimeter to culminate a 10-play, 69-yard drive. Jaden Woods booted the extra point to cut the visiting squad’s deficit to 14-7 at halftime.

The second half was all Union City as the Tornadoes defense limited Peabody to three-and-outs on five-of-six possessions, and the offense contributed a pair of touchdowns. Easley scored on a seven-yard option pitch to highlight a four-play, 56-yard trek, and Trey Jones scored on a four-yard blast up the middle to punctuate a nine-snap, 39-yard series. Woods tacked on both extra points to make the final score 21-14.

“Union City made some plays there when they needed to, and we had the opportunity to make some plays and we did not make them quite like we should have. We wish we could have some of those plays back, but that is part of it. Some times you don’t play as well as you like on Friday nights and that is kind of us. I am not down on these guys. I still think the world of them, and I know we will get better. I know they are frustrated, and I understand that. We are all a little frustrated because we feel like we let one get away from us. We will come back next week and get better and learn from this. It will give us an opportunity to play these guys again in November,” predicted Coach Jacobs.

Several of Peabody’s most critical mistakes were made by young sophomores who weren’t battle-tested against experienced Union City players.

One of Peabody’s busiest players of the night was punter Hunter Hudson, who kicked five times for a 36-yard average. The Tide lost its only fumble, and the Tornadoes relinquished two-of-five bobbles.

Offensive leaders were: Peabody – Jarel Dickson with 17 rushes for 31 yards and one touchdown; Courtlen Wade with 10 scrambles for 17 yards; and Jacquez Wilkins with four attempts for 27 yardss; Union City – Trey Jones with 21 carries for 131 yards and a touchdown; Braxton Waddell with 20 keepers for 107 yards; and Andrew Easley with nine attempts for 44 yards and two touchdowns.