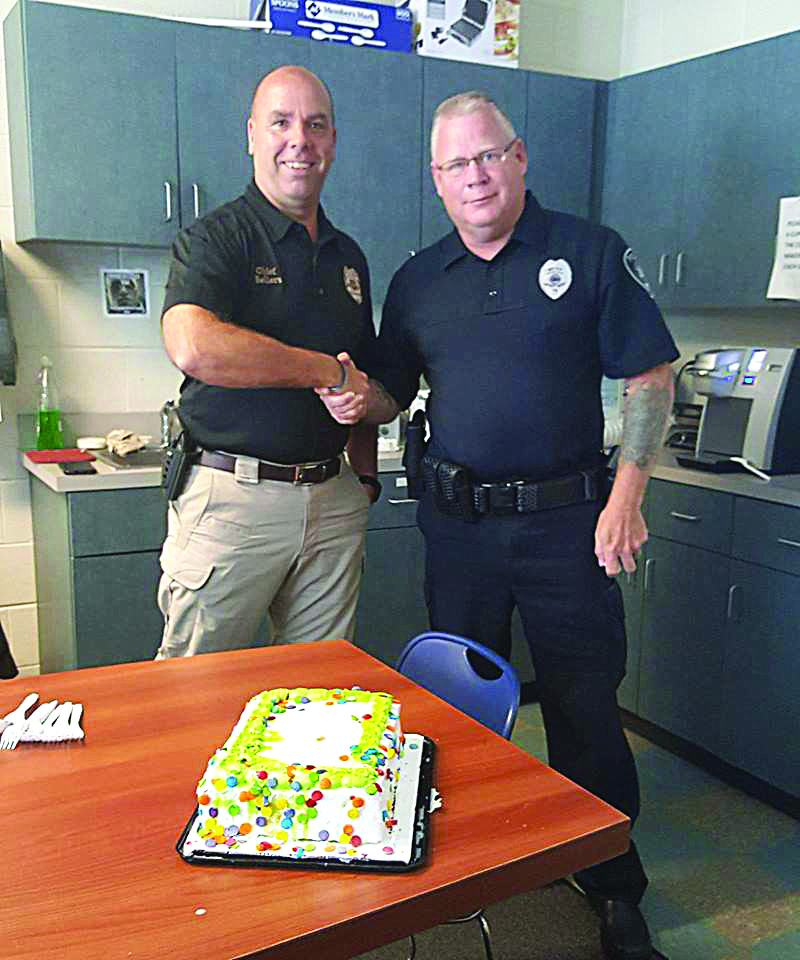 Behind the Badge: Jones looks back on 25 years with MPD

The life of a police officer is filled with moments and images that they would rather not remember. They are there for our worst moments. When lives are lost, when children are hurt, they are often the first ones on the scene, and those memories never die.
In his 25 years with the Milan Police Department, Milan native Terry Jones has seen it all, but still managed to keep his smile and his servant’s heart without losing any love for his community or his fellow man.
Like many other law enforcement officers, Captain Jones began his career with the MPD in 1992 after serving his country in the Armed Forces.
“My stepfather was in the military,” said Captain Jones. “We talked, and he said it would give me a good place to start in life.”
“I think a lot of it is the structure,” Jones said of the link between law enforcement and the military. “It’s already a semi-military environment, and a lot of the skills that we learn in the military carry over. But not everybody wants to be ‘the police’. It’s something you have to want to do.”
Jones served in the U.S. Army for seven years, but found the workaday civilian life lacking when he returned home.
“I think I spent about a week working in a factory before I decided that it wasn’t for me,” Jones said. “One of the things I liked about the Army was that we were working outside and constantly moving. I didn’t want to be confined to offices or factories, and a police officer is one of those jobs that offers a lot of freedom in your work environment.”
Jones joined the MPD under Chief Bratton, taking the streets as a patrol officer back when the police department was located on South First Street, on the current site of Beard’s Auto Sales.
“Back then, you had to buy your own firearms and gear,” Capt. Jones remembered, smiling. “I had to take out a $1,000 loan, and the Chief told us that if we didn’t pass the academy, we wouldn’t have a job. I had to pass, because I didn’t know how I was going to pay that money back.”
Jones never had to worry about the loan, as he graduated from the police academy and went on to become one of the most senior officers on the force, behind Chief Bobby Sellers and Lieutenant Jeff Goad, and second in command within the MPD.
“I’ve worked under five Chiefs and four mayors,” said Captain Jones, who was trained by former Police Chief Tim Wright. “The city has changed a lot over the years. When I started, there were 14 or 15 bars in town. Now it’s closer to eight. Crack cocaine also hit Milan hard in the early nineties, so it was a pretty busy time for us.” 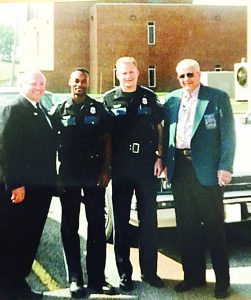 JONES THE ROOKIE – This photo of former mayor Don Farmer, Brock Jones, Terry Jones and MPD Chief Bratton was taken after Jones graduated from the Police Academy in 1992. Photo submitted.

The years have seen the crack epidemic replaced with methamphetamine and opiates, but Captain Jones says that crime in Milan has remained mostly the same, revolving around drugs. Jones has worked his share of drug cases over the course of his career, spending five years as a K-9 handler with MPD police dogs Kilo and Buck, which he recalled as some of his most enjoyable times on the job.
“When your dog is working, it’s kind of like coaching a football game,” Capt. Jones explained. “It’s a great feeling to trust your partner and see all of your training pay off.” Jones’ training and trust in his dog paid off in one memorable instance when, during an arrest, a suspect attempted to escape.
“The guy was part of a motorcycle gang from Kentucky on his way to make a large buy. We caught him with a small amount of cocaine, a gun and more than $10,000 in cash. He hit me and took off running, but the dog caught him and brought him down.”
Captain Jones has gotten into a few scraps while on duty, but neither the dangers of the job nor the requirements of his rank have kept him off the street, even with plenty of younger, more athletic officers around to handle unruly criminals.
“When I have to run someone down, I’m carrying 20 extra pounds of gear. They’re wearing shorts and tennis shoes. It’s not much of an accomplishment if they get away from me,” laughed Jones. “For the past few years, I’ve split my time between being in the office and being on the street. I’ve been offered Detective positions before, but I wanted to stay out in the community as much as possible.”
Along with the freedoms it affords, one of the main reasons Capt. Jones has chosen to stay on the street is his love for his hometown.
“Overall, the people of Milan are really good people,” said Jones.”It’s been a great place to work and we don’t have any real problems with the community. Being from here can make it difficult to do your job sometimes, but just because you grew up with someone doesn’t change the fact that what they did was wrong.” Under Chief Sellers, the Milan Police Department has focused on being more visible and active in the community, a change which fits well with Jones’ personality. 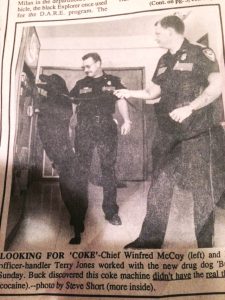 MAN’S BEST FRIEND – Captain Jones stated that one of his favorite jobs during his tenure with the Milan Police Department was working as a K-9 handler. Jones (right) is pictured here with his dog, Buck, in a clipping from the Mirror-Exchange. Photo submitted.

“The department has grown a lot,” said Jones. “We’re very pro-community now and I think it works. It lets us get to know people rather than just be a face in a car. As long as you treat people with respect, they will remember it. It’s really nice when you walk into a place and everybody knows you by your first name. I like that when people have a problem, they ask to talk to me, but there’s nothing more rewarding than having someone that you arrested come up later and tell you that you saved their life.”
In addition to saving lives, Captain Jones stated that one of the high points in his career was the time he helped bring a life into the world.
“I helped deliver a baby once in the nineties,” Jones said, smiling . “I’ll always remember that. It was in a car just off of Culpepper. The girl was a senior in high school. The baby came before the ambulance, so the First Responders and I delivered it. I wasn’t there for the birth of my kids, but I was there for hers.”
Jones’ sons, Jesse and Cooper, have followed in their father’s footsteps. The youngest works for the Gibson County Sheriff’s Department; the oldest is currently serving in the Navy. Jones also has a daughter, Bridgette, and plans on seeing more of them, as well as the rest of the world, when he retires in six years.
“When I got back from Iraq in 2010, I made it a point to take more vacations,” said Jones, an avid hunter and fisherman. “I plan on packing up my motorcycle and seeing things that I’ve never seen before.”
Twenty-five years is a long time on the job, but while Jones is looking forward to his retirement, he said there is nothing he would have rather done than serve and protect his small town home.
“I’ve dealt with ice storms and murders, even removed possums and snakes from people’s attics,” he said. “I’ve been to 17 countries and 40 states, but I always find myself back in Milan.”