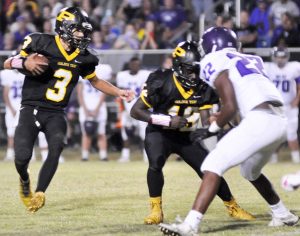 While Milan’s football team was built in the “Dawg Daze” of summer, Peabody’s squad was constructed in the “Winter Phase” of the off-season.

“You are not born with toughness. A lot of guys are naturally strong, athletically gifted or fast, but they are not born with toughness. You either want to be tough or you don’t. You let people get you tough and show you how to be tough. We have 38 of the toughest, grittiest dudes I have ever coached. No matter the adversity, we are going to tough through it. That is what we talked about in the off-season. We were in the fieldhouse right here in December, January and February. When other teams were doing other things, we were in there getting after it, working hard and fogging the windows, getting prepared for August. Games like tonight were what it was for. This was the moment we were waiting for and this is where we wanted to get coming into the season,” explained Coach Jacobs.

Milan fielded one of the most explosive backfields in the state. The Bulldogs rushed for 131 yards on 24 carries for a 5.4-yard average, but the Tide defense rose to the occasion and allowed only one big play rushing touchdown, a 70-yard sprint by Anthony Ballard. The Milan running backs earned everything they got against Peabody’s stout defense.

“As our defensive coach, Tab Vowell is a tremendous workhorse, with the hours he puts in and the way he does, he gets 100 percent of what we did on defense. The rest of us just coached our tails off as hard as we could, but that defense played hard for him, and I think they think so much of him that they wanted to win this game for him,” acknowledged Coach Jacobs.

J.C. Eubanks’ fumble recovery at the Milan 39-yard line on the Bulldogs’ initial possession set the tone for the defensively controlled game. After the defenses held the opposing offenses in check for the initial five series of the game, Peabody lit up the scoreboard first. Early in the second period, Power back Jarel Dickson plowed up the middle of the field for a one-yard touchdown to cap a nine-snap, 36-yard drive. Zach Grooms kicked the extra point for a 7-0 lead.

Four plays later, Milan answered with a 46-yard touchdown pass from quarterback Taylor Lockhart to wide receiver Dylan Mayberry. Noah Heildeberg booted the point-after-touchdown to tie the score at 7-all with 10:14 left in the first half.

Trenton managed to take a 14-7 lead into the locker room at halftime.Quarterback Cooper Baugus scrambled through a gaping hole in the middle of the Milan defense for a nine-yard touchdown, and Grooms tacked on the extra point with 46 seconds left.

One of Peabody’s few defensive break-downs occurred midway through the third frame when fleet-footed Ballard broke free and sprinted for a 70-yard touchdown. With Heidelberg’s kick, the score was knotted at 14-14.

The Bulldogs executed another big play touchdown when Lockhart located Johnny Littles all alone in the end zone for a 38-yard touchdown aerial. Heidelberg’s kick was true, and the visiting squad led 21-14 at the end of three frames.

“When we got down 21-14, we were making so many mistakes, but we told the kids, ‘You just have to gut through this and find a way to win the game.’ I am so proud of these kids and this group,” praised Coach Jacobs.

“You won’t find a tougher kid in West Tennessee than Khance Hill. He doesn’t come off the field, even at practice. He is always going at it and is the heart of our defense. When we need a play, that is who always ends up making a play – the kid who is always working his tail off every day in practice. I knew when we needed a play to be made that Khance would make it,” praised Coach Jacobs.

Grooms’ kick split the uprights to deadlock the score for the third time at 21-21 with 11:20 left in regulation play.

After Peabody’s defense relegated Milan to three-and-out, the Tide had the chance to retake the lead. The home team reeled off a dozen plays and advanced the ball into striking distance for a potential go-ahead score but was unable to capitalize on the opportunity. Trenton’s pass play on second down from the four-yard line surprised everyone in the stadium except Milan defensive back Austin Drake, who intercepted the ball in the end zone.

After Milan dropped a long bomb with touchdown potential, PHS could not score in the 2:44 left in regulation and the game went into overtime.

Following a tremendous defensive stand on the first series of the extra period, the Tide weathered a 24-yard field goal attempt, which sailed wide to the left of the upright.

On the ensuing snap, Baugus kept on a quarterback keeper around the right perimeter for the 10-yard touchdown and 27-21 overtime win.

“We fought through a lot of mistakes. We made some mistakes we don’t usually make, like dropping some touchdown passes. You like having the opportunity to coach a gutsy team. These guys gutted through it and that is why we won the game, because we showed a lot of guts and determination and we were just going to play and keep playing no matter the mistakes we were making,” explained Coach Jacobs.

Statistically, Peabody registered 220 yards rushing and 112 yards passing for 332 yards and 17 first downs. Milan managed 131 yards on the ground and 106 yards through the air for 237 total yards and nine renewed series. Baugus completed 14-of-23 passes with three interceptions. Milan’s Lockhart went 5/8/0 in the aerial department.

PHS did not drop the football, and Milan relinquished both fumbles. The home team was penalized six times for 50 yards, and the visiting squad was flagged on five occasions for 40 yards.

Offensive leaders included: Peabody – Cooper Baugus with 29 scrambles for 126 yards and two touchdowns; Jarel Dickson with 21 rushes for 87 yards and one touchdown and six receptions for 46 yards; and Je’Nevee Robinson with eight catches for 66 yards; Milan – Anthony Ballard with 10 runs for 92 yards and one TD.

Top defenders included Courtlen Wade with three solo tackles and a trio of assists; Bryce Franks with three primary strikes, one secondary hit and a sack; Khance Hill with three initial contacts, one sack and a 57-yard touchdown on a fumble return; and Brantley Whitwell with two solo tackles, three assists and a sack. 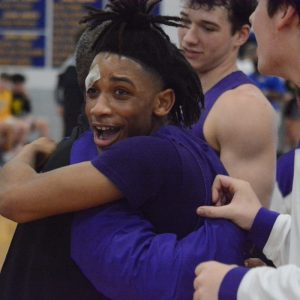 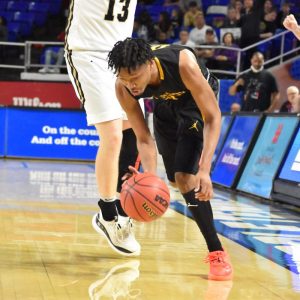 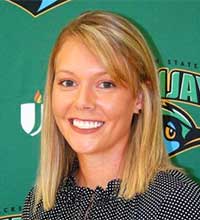